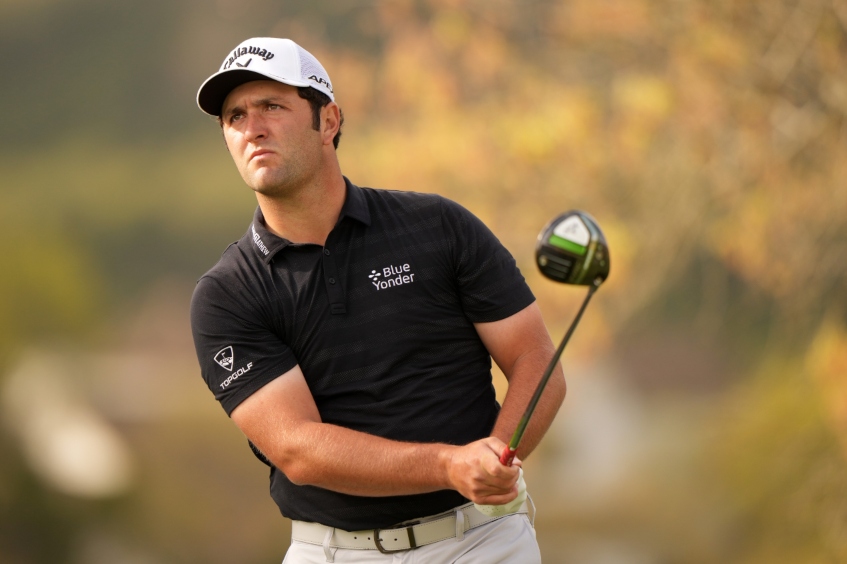 AUSTIN, Texas — Jon Rahm and Patrick Cantlay thrust their fists in celebration with birdies on the final hole to win, the kind of emotions typical for a final round. In the World Golf Championships-Dell Technologies Match Play, every day can feel like Sunday.

The opening round of group play Wednesday featured 16 of the 32 matches going the distance, Rory McIlroy suffering his worst loss in 10 years and some of the best moments belonging to newcomers to this fickle event.

That starts with Antoine Rozner, the 28-year-old from Paris who only got into this World Golf Championships by winning the Qatar Masters two weeks ago with a 60-foot birdie putt on the final hole.

Clinging to a one-shot lead over U.S. Open champion Bryson DeChambeau and a tree blocking the 54 yards that separated him from the flag, Rozner hit a bold flop shot that settled 8 feet behind the hole. Finishing with a flair, the Frenchman holed the putt for a 2-up victory over DeChambeau.

“I think it’s one of those shots you’ve just got to go ahead and hit it,” Rozner said. “I turned out to hit that shot really well, went super high over the trees. Super happy that it was close because that put a lot of pressure on Bryson on the last chip. So yeah, very happy.”

Next up was Robert MacIntyre of Scotland, dropping two eagles over the final five holes in a 2-and-1 victory over Kevin Na. The second one was at the par-5 16th, where MacIntyre holed a bunker shot to seize control.

With the talent pool in golf as deep as it has ever been, it’s hard to call any match an upset.

McIlroy was so discouraged walking off after 13 holes that he declined to talk about his match for the second straight time in this event. The previous occasion was in 2019 when he lost to Tiger Woods in the knockout stage on the weekend.

McIlroy found the water on a hole with no water hazard at No. 5 — his driver bounced off a path, over the fence and into the swimming pool of a house. He had a 12-foot birdie to win a hole and three-putted to lose. And the match ended on No. 13 when McIlroy’s eagle chip from behind the green went all the way into the water.

It was his biggest loss in Match Play since Ben Crane beat him, 8 and 7, in the second round of 2011.

Thomas fell 5 down to Matt Kuchar on the front nine, too big a hole from which he could rally. Coming off a victory in THE PLAYERS Championship, he wound up losing to Kuchar on the 16th hole.

“I’m not sure that many people would have been picking me this week,” said Kuchar, who has gone more than a year since his last finish in the top 10.

Kevin Kisner, the defending champion from 2019 — the Match Play was the third event to be canceled last year because of the COVID-19 pandemic — won his seventh straight match by beating Louis Oosthuizen.

Since the format switched to group play in 2016, Kisner is the only player to have lost his first match and gone on to win. So there’s hope for Thomas, DeChambeau and McIlroy. They still have a chance to win their group, with the 16 winners advancing to the knockout stage on the weekend.

It won’t be easy, even for those who win. Dustin Johnson, the top seed, lost momentum when he found the water on the par-5 12th and three-putted from 15 feet to lose the 13th. He finally closed out Adam Long on the 18th hole.

“Winning your first match definitely helps,” Johnson said. “But you’ve still got to go pretty much win all three matches if you want to advance.”

Sebastian Munoz rolled in a 25-foot birdie putt on the last hole, forcing Rahm to make his 8-footer to win. He rolled it in and chased it to the hole with a fist pump.

Two groups later, Cantlay made an 18-footer to finally put away Brian Harman, 1 up. The normally reserved Cantlay also gave a short fist pump and for good reason. He was never out of a hole and never made worse than par. He holed out a short wedge for eagle and made six birdies, and might have made another if the hole wasn’t conceded.

And he still needed a big putt on the last hole to win.

“I feel like it shouldn’t be that hard,” Cantlay said. “I played great. Didn’t make any bogeys, and it was all the way to the bitter end really sweating it out. … When you’re up against an opponent who plays really, really well and you play just a little better, it’s really satisfying.”