AUSTIN, Texas – One year after losing in the final, Kevin Kisner is the WGC-Dell Technologies Match Play champion.

Kisner closed out Matt Kuchar, 3 and 2, with a 28-foot birdie putt on the 16th green to secure the biggest victory of his professional career.

The win is Kisner’s third on the PGA Tour, following the 2015 RSM Classic and 2017 Colonial.

“I was thinking out there it might be the hardest one, just because you have the physical aspect more than any other week,” Kisner said. “It was grueling, definitely with the winds, the temperature today.

“Overall, it was a long week, but I prevailed and [I’m a] world golf champion.”

The 35-year-old made it through to Sunday afternoon in Austin last year, when he went down to Bubba Watson, 7 and 6. This year, he defeated Ian Poulter in a Friday afternoon playoff to advance out of pool play and then took down Haotong Li, Louis Oosthuizen and Francesco Molinari in his march back to the final.

One up at the turn, Kisner widened his lead when Kuchar found the water at 11 and failed to save his par from over the back of the green at 15. Three up with three to play, Kisner ended the match a hole later with his birdie make.

Asked what he gleaned from last year’s loss, “Well, I just learned a lot,” he answered. “I learned about preparation. I learned not to get too amped up for that final. You still have to come out and play golf.”

In the consolation match for third place, Molinari defeated Lucas Bjerregaard, 4 and 2.

The reigning champion golfer of the year stormed out to 3-up lead when he played his first six holes in 4 under par. Bjerregaard would not cut the deficit to less than two for the remainder of the proceedings.

Molinari’s loss to Kisner in the semis marked his first match play defeat in 11 outings. He was a perfect 10-0 dating back to Friday of last fall’s Ryder Cup.

Bjerregaard advanced to the semifinals by besting Tiger Woods, 1 up, in the quarters but saw himself on the other end of a 1-up result against Kuchar on Sunday morning. With the loss, he fell just short of securing special temporary membership on Tour, needing at least third-place finish to meet the non-member points requirement. 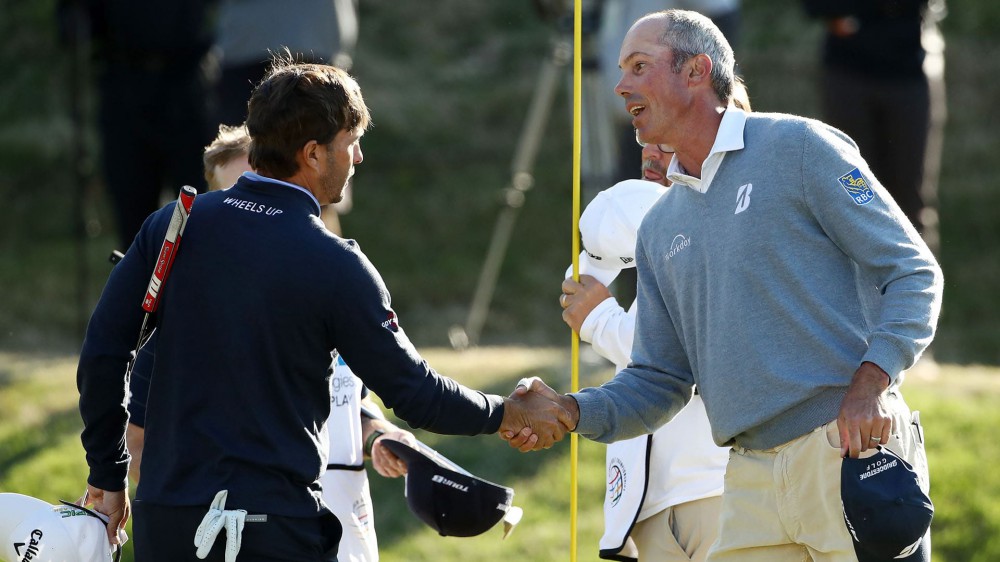 Back from back injury, Casey eyeing another win