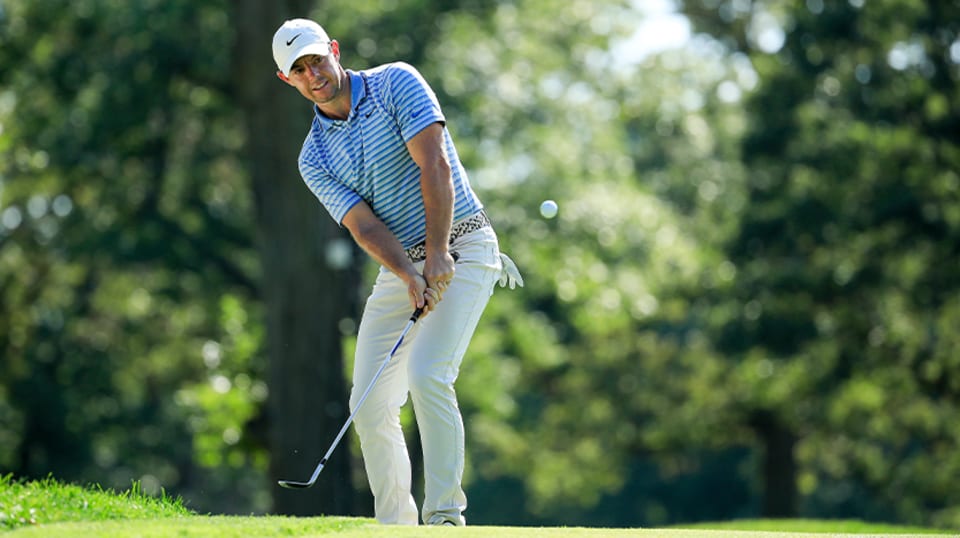 OLYMPIA FIELDS, Ill. – The players will deny it but there were reports a collective of them snuck back out on to Olympia Fields post round on Friday to perform a rain dance.

With the former U.S. Open venue playing just like it would for a national championship, just two players sit under par after 36 holes. The hard and fast fairways and greens and tricky rough see only FedExCup champion Rory McIlroy and Patrick Cantlay at one under.

Just two others, last week’s champion and current FedExCup leader Dustin Johnson plus Japan’s Hideki Matsuyama, are level par. The other 65 players are licking their wounds and praying for rain.

The champion of last year’s season-long race is happy that this represents the fewest players under par through two rounds in a non-major since 2000. This despite dropping two shots in his last five holes. The scoring average through two rounds is 72.775 on the par-70 layout.

“I said last week after the tournament, if you need someone to shoot between like even par and 2-under, I’m your man, so I’m loving these conditions,” he said.

“This is proper golf. This is you’ve really got to think about stuff, you’ve got to land it on your numbers, you’ve got to put it in play. Those sort of five-, six-footers for pars to sort of keep the momentum going is huge. It’s nice to play a round of golf like that again.”

McIlroy is obviously pleased to be where he stands at the halfway mark but expects those from back in the pack to come after those with a current advantage. If the course does get a little moisture from either rain or maintenance watering the greens it is likely to dry up as the day progresses.

“We’re supposed to get a little bit of rain tonight, but I don’t think enough to really soften it. I think you’ll see over the weekend guys will go off early, be able to shoot some decent scores, and then as the day goes on and the later tee times get out there, it’ll just get progressively harder as the day goes on,” McIlroy said.

“I think something like remember THE PLAYERS Championship when it was back in May, guys would go out on a Sunday, six or seven back, shoot a 66 and they’d hang around the clubhouse all day and wait and see what happens to the guys on the way in. I think you might see something similar to that this weekend.”

Johnson won last week’s THE NORTHERN TRUST at 30 under par. He knows the winner might be lucky to be three under this week. A long birdie on the last hole Friday brought him level and in contention to go back-to-back in the Playoffs.

Both he and McIlroy share a record five FedExCup Playoff wins so far in their career.

“It’s a completely different golf course, completely different conditions. It’s firm and fast, and it’s a lot of fun to play this kind of golf. I like it. It’s very difficult, but you’ve got to stay focused all day long, and you’ve really got to pick and choose your spots where you can be a little bit aggressive,” Johnson said of the contrast that saw the field a collective 383 over par through two rounds.

“Last week was fun, too. But this week is more of a grind, that’s for sure. Every single hole out here is difficult. You’ve got to really be focused on every shot that you hit.”

Matsuyama is the only player in the field to reach four under throughout the tournament thus far, doing so with a sublime chip in for a birdie on the par-3 eighth hole on Friday. Unfortunately, it was his final highlight and four bogeys followed.

“I wasn’t able to drive the ball well today, so it was a tough round,” he said. “I’m just happy that I’m in position where I can contend on the weekend.”

Cantlay needed a hole-out eagle, a chip-in birdie and a 42-foot birdie putt on the last hole to keep his total under par. The two-time winner knows he can’t rely on that over the final 36 holes.

“The golf course is really, really good, but it’s very, very difficult. The chip-ins obviously helped a bunch, and you don’t do that every day, so I need to hit it a little better on the weekend.

But for a scrambling day, it was excellent,” Cantlay mused.

The former UCLA standout believes the key to victory will be keeping a level head.

“You’ve got to realize that you’re going to make mistakes,” he explained. “You’re going to make some bogeys just because of how hard the golf course is, and always having a forward mindset as opposed to thinking about what’s happened or what the mistakes you’ve made is really important.”

Those who dwell on mistakes will be no doubt forever mired in the clouds… and not the rain clouds they desire.