Bushnell Hybrid GPS Laser Rangefinder Review – When I started reviewing golf equipment back when Justin Rose was missing his 21 cuts with our logo on his bag, there were several bits of golf equipment that I have wondered why on earth no one was doing. 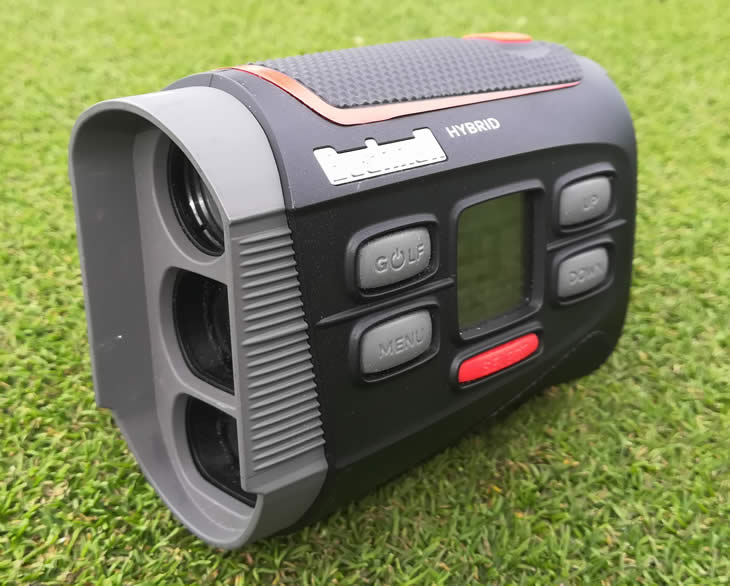 We had waterproof clothing but no waterproof golf bags until Sun Mountain came along with their H2NO range and now most bag brands have a waterproof option.

The other was a combined laser and GPS. Yes, I know Bushnell did have a go at this in 2012 with a product of the same name, but it didn’t take off as it had all the visual appeal of a 1980s mobile phone.

Other versions have come and gone and in reality laser users have been left to combine it with a simple front/middle/back GPS to get the flag position relative to the green.

With GPS and laser manufacturers each pushing the pros of their approach and the cons of the other, they avoided the obvious solution that a combined device was what the market wanted.

There are now some hybrids around that try to do this from non-traditional distance measuring brands, but it is significant that specialist laser brand Bushnell is now having another go and maybe this is the watershed moment that will see mass adoption.

GPS technology is becoming so small and ubiquitous that putting a screen on the side of a market leading laser is not the visual faux pas it was in the past.

Compared to the compact Bushnell Tour V4 Slope laser, the Bushnell Hybrid 2018 version is obviously a little chubbier, but still looks good and is easy to get your hand around and even slip in your pocket.

There are 4 easy to understand buttons either side of the GPS screen that help you turn the GPS on and select from the 36,000 courses that are stored internally.

These courses can be updated by pairing the Hybrid with the Bushnell app on your smartphone. The pairing process was not the slickest I have experienced but eventually it got the job done.

When on the course you can see the front and back yardages on the screen on the side and there is also a shot measurement function for measuring individual shots.

The unique thing about the new Hybrid is that they are also shown at the top of the viewfinder, together with the hole number, when you are looking through the eyepiece and lasering the flag. This gives you all you need to know in a single glance and is the major benefit of the combined approach.

The generous view finder magnifies up to 5 times and the larger font is easier to read than the Tour V4. You also get the Jolt vibration when the laser locks on to the flag so you know that you are aiming at the right target.

When it comes to GPS accuracy, then this depends on two things, namely the accuracy of the mapping and the GPS signal. The smaller the GPS aerial in terms of size and power, the less accurate it will be, which is why mobile phones don’t do as well for golf as larger handheld GPS devices.

The GPS on the Bushnell laser looks to be on the smaller side just by the nature of the device, and a couple of times over 5 rounds the reading for the flag from the laser was closer than the front of the green shown by the GPS.

Now Bushnell are a laser company so I would expect their lasers to be right on their claimed +/- 1 yard accuracy, so the guilty party here is probably the GPS and most likely the mapping.

This is not necessarily a deal breaker, as you are probably just wanting a guide to where the flag is relative to the front and back of the green, but clearly discrepancies like this don’t exactly give you confidence in the GPS yardages.

Now you could get these discrepancies anyway if you are using two devices, but having them on the same device highlights it a little more.

If you push the red Select button when you are on a hole it will bring up the nearest 4 hazards with three letter abbreviations to figure out.

This is better than nothing, but like other small screen systems that use this approach, you have to figure out which hazards are which visually and also hope that you aren’t on a bunker strewn course with four bunkers within the next 100 yards that you will probably carry and then don’t have distances to the ones that matter.

The laser runs off a normal CR2 battery, whereas the GPS screen is powered by a rechargeable lithium ion battery that connects to your power source via a supplied mini-USB cable.

The USB port is hidden behind a slightly fiddly rubber cover that doesn’t really help the otherwise smooth aesthetics.

This is probably the right approach as otherwise the GPS will munch through batteries and it also means the laser will still work if you forget to re-charge the GPS element of the device.

It does mean that laser lovers are back to recharging a distance device, which might be one of the reasons they avoided getting a GPS in the first place. The charge will last about a round and a bit so it is something to do after every round.

However this is a hybrid and like all things in life there have to be compromises for everything to get along and the Bushnell Hybrid Laser GPS compromises very well to get the looks, performance and usability of the best of laser and gps in a single device.

The Bushnell Hybrid could be a little better on GPS yardages and how the hazard information works, but that might need to wait until technology improves on the GPS and screen display size.

The Hybrid is about £130 more than the standard Tour V4, so about the cost of a small GPS, but only £70 more than the Tour V4 Slope, even though it doesn’t have the elevation measuring function, which is a bit of a surprise.

If you are thinking of splashing out on a top quality laser like the Bushnell Tour V4 Slope then maybe the extra might be a step too far, especially as you can get the front and back yardages from the Bushnell app on your phone as part of the deal.

However if you want or already use both types of devices and don’t want the hassle of referring to them both, then I would recommend the Hybrid as it does save a lot of time and hopefully in the future the technical improvements will see this become the default for all distance devices.