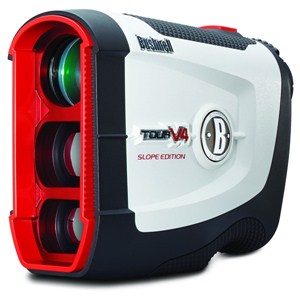 This may be enough for some Bushnell fans, but I will continue to explain why. The Tour X was quite chunky and whilst it delivered a lot in return, it was not something you could slip easily into a jacket pocket unnoticed.

The smaller size of the Tour V4 Slope not only makes this possible, but the contoured design of the unit and the rough gripping pads make you feel you are holding the laser more securely.

The advantages don’t stop there as the focus is now controlled by rotating the reassuringly stiff dial in front of the eyepiece, which is actually a good thing.

On the Tour X, the focus wheel was separate and in front of the rotating eyepiece and every time I took it out of the case I knocked the wheel and had to re-focus, which became a real pain as I mentioned in that review. Now it may slacken off in time, but so far every time I take out the Tour V4, the focus is the same as before which is much better.

There are two versions of the Tour V4. The standard version has a grey front and measures distance. The Slope version has red front and also measures the effect of slope on distance. You will have to lay out another £40, but this still makes it £80 cheaper than the Tour X Jolt.

On the Tour X you disabled the slope measurement to keep it legal for competition use by switching the red cover for the black one, which means you had to have both covers with you all the time.

On the Tour V4 Slope the function is disabled by clicking and holding the main power button on top to change the settings to make it legal for use in tournament play.

This is much more convenient and less hassle, so for a relatively small upgrade the benefit of having the slope function to see how much elevation affects yardages is well worthwhile. If this is still too much for you then the Tour V4 Shift mentioned later is even easier to use.

To operate, just point the crosshairs at the flag and push the power button on top. The display is clear although the font could maybe be a little larger. The distance is shown in yards or metres and if the slope function is activated the adjusted distance and degree of elevation change alternate below this.

To let you know that you have hit the flag, the Tour V4 will vibrate when you are locked on. The success of getting a ‘jolt’ may vary with how much the flag is moving and the distance to it, but even if there is no vibration you can still get the distance to the flag.

Bushnell says that the Tour V4 will pick out a flag at up to 400 yards and bigger objects like the nearest bar at 1,000 yards. I managed to get a jolt on a flag at 300 yards, but once you get over 250 yards you need to be able to hold it pretty steady to pick up the flag.

The Tour V4 runs off the usual CR2 battery that is easily replaced using the pop up tab on the battery compartment to unscrew the cover.

It comes with the usual high quality Bushnell case that you can hang from your bag, or better still slip a strap through the loop on the back, as I have seen more robust karabiners in my time.

Once on, you don’t have to zip it up all the time as the clever toggle strap will enable quick access.

Overall the Bushnell Tour V4 is an excellent laser combining clean functionality, speedy results and a compact size in a quality package.

I think the Tour V4 Slope version is a worthy upgrade and is the one to go for because it will add more value to your game. The fact it can be disabled until such time as the authorities change their minds means that it does everything you could want a laser to do.

Now if I was to review the Shift version of the Tour V4 in one sentence, then I would say that it is exactly the same as the Tour V4 Slope, but it uses a sliding switch on the side to turn the slope function on and off.

Bushnell are calling it ‘Slope-Switch Technology’, but it’s really just a switch that says ‘Tour V4’ when the button is in normal mode and when you slide it up, the words ‘Slope Edition’ are revealed to show you are in that mode.

It is a lot more convenient than holding down the power button and waiting to scroll through the options to switch the slope mode on and off like you do with the standard V4 Slope. Therefore if you regularly alternate between practice and competitive rounds then it will be another reason to buy an already quality laser.