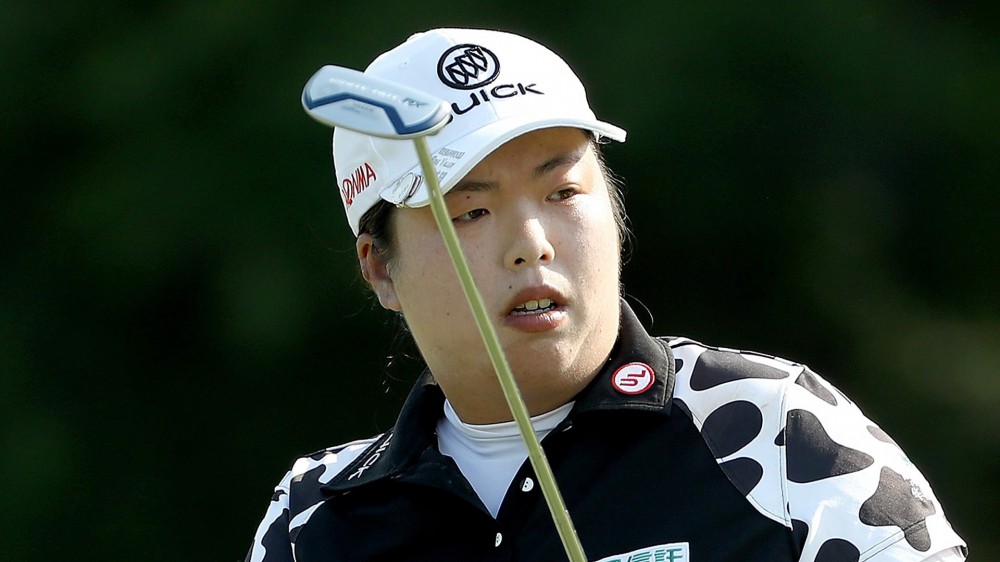 BEDMINSTER, N.J. – Shanshan Feng separated herself in more ways than one Thursday at the U.S. Women’s Open.

First, there was her score.

A 6-under-par 66 moved her to the top of the leaderboard at Trump National Golf Club, a shot ahead of Amy Yang through the morning wave.

And then there were Feng’s spotted-cow print shorts and matching shirt sleeves.

They’re the newest ensemble in her spotted-cow print collection specially made for her by Pro Simon, a Taiwanese company.

“The cow outfit has become one of my signatures, so when I’m wearing the cow pants, people recognize me more,” Feng said. “I think that’s good, to bring out your personality. And also tell people what the difference is between you and the other players.”

Her spotted-cow print pants were a huge hit in England when Feng wore them at the Ricoh Women’s British Open last year.

“I like wearing the cow pants, because I stand out on the course, and people can spot me from, like, really far away,” Feng said.

Feng was asked if her scoring average is better when she’s decked out in her spotted-cow attire.

“Somebody has to calculate that,” Feng said. “Maybe, because more people are supporting me with the cow pants, so maybe that makes me feel more excited and maybe play better.

Feng, China’s first major champion and Olympic medalist in golf, was at her charming best Thursday after taking the early lead. She typically manages to make reporters laugh when she makes a media center appearance.

When Feng met China’s president in an official governmental reception for Olympic medal winners last year, she created a stir flirting with her country’s president.

When President Xi Jinping greeted Feng, she told him he was handsome.

“He was shocked,” Feng said about it later. “And then he shook my hand one more time.”

Gary Gilchrist, Feng’s swing coach, said Feng’s swing is among the most dependable in the game. She prefers a straight ball as her stock ball flight, over a draw or fade.

“Her swing is very, very consistent,” Feng said. “She doesn’t put too much spin on the ball. Her fundamentals really don’t change. They are there. It’s like a Rolls-Royce. The great thing about a Rolls-Royce is that it starts every time. It’s dependable.

“And the thing is, when she’s off, people get so concerned, but she doesn’t even worry about it. She knows, `That’s the game.’ She understands. She looks at people and tells them, `You are out of your mind if you think you are going to play great every week.’”

Gilchrist said another advantage Feng enjoys is that she doesn’t have to practice a lot to keep her swing in shape. In fact, he says she rarely ever practices after a round, and it helps keep her game fresh.

While a lot of players took off last week, following the KPMG Women’s PGA Championship, Feng flew to China to play the Kumho Tires Ladies Open.

“It was my sponsor’s tournament, and I felt like it was my responsibility,” Feng said. “And I really wanted to see my family and all my friends back home.”

The reward for going proved greater than Feng expected.

“It was such a warmup for this week, because that course was so narrow,” she said. “I had to hit my drivers and my irons really, really straight. That was one of the keys why I actually played well today, because I left myself birdie chances on most of the holes. I feel great.”