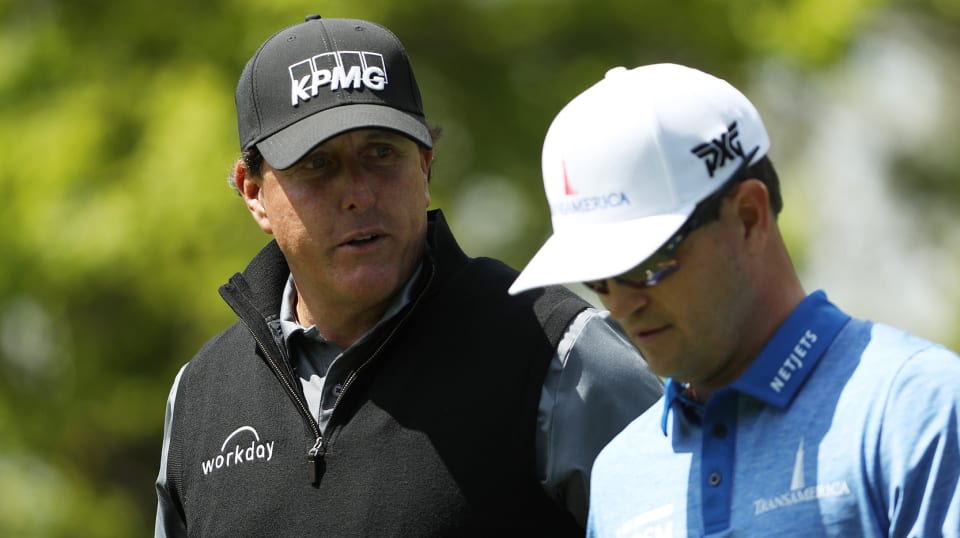 Defending champion Sungjae Im, the ironman who has played in 77 events in his first two-plus years as a PGA TOUR member, returns to PGA National to defend his first TOUR title at The Honda Classic.

Honda is the longest-tenured title sponsor on TOUR, since 1982, when “Chariots of Fire” won the Oscar for Best Picture. The Honda Classic will feature several of the top finishers from last week’s PLAYERS Championship, led by runner-up Lee Westwood, who has four top-10s in eight Honda starts.

Others in the field this week who thrived at TPC Sawgrass include Brian Harman (T3), Talor Gooch (T5) and Paul Casey (T5). They will try to tame the challenging Champions Course, where since 2007 the Bear Trap (Nos. 15-17) has accounted for 1,515 water balls and 172 scores of triple bogey or worse.

Im, Westwood, Rickie Fowler, Phil Mickelson and Adam Scott are among the stars who will be in the Featured Groups. To get you ready for LIVE’s coverage, we convened our experts for a roundtable discussion on the groups. Enjoy.

This area is so full of PGA TOUR pros, many in the field won’t have to get on a plane or even drive very far. Is playing a home game an advantage because you get to sleep in your own bed, or a disadvantage because you’ve got to sort out all those ticket requests?

CAMERON MORFIT: I still think it’s an advantage, even if you’ve got to sort out the tickets. It’s especially advantageous for older players, who might not travel as easily as they used to.

BEN EVERILL: I know I’ll need to pull the splinters out of my backside for sitting on the fence, but I think this is a case-by-case scenario. I know several players who struggle on the home track because of the external and internal pressure applied to perform in front of family and friends, but then others who thrive under it and just relax into the week. I think Cam is on to something with maturity… perhaps it is just something you gain from experience.

ROB BOLTON: Depends on the guy. I researched and wrote about this many years ago, and still couldn’t determine either way. In the context of the results, there’s sufficient evidence that a home game is of value, but it’s the exception to the norm of being a road warrior. So, only veterans who know how to prepare accordingly probably understand how to harness an advantage.

JEFF BABINEAU: Let me get this right: You can tee it up in a $7 million PGA TOUR event, not have to get on a plane, can play fetch with the dog in the mornings, and can also sleep in your own bed each night? Yes, sign me up. When total expenses for the week are a few gallons of gas and maybe a toll or two, it’s a pretty good week. Miss the cut, and you are home in time for dinner on Friday.

The Champions Course at PGA National is so treacherous, with so much water, but then so is the Stadium Course at TPC Sawgrass. Should the guys we saw play well at THE PLAYERS Championship be expected to do the same at Honda?

CAMERON MORFIT: I would say yes except I think there’s a real danger of fatigue and letdown after last week. PLAYERS is such an exhausting tournament, with stress on every hole, especially 16-18. Now you add the stresses of the Bear Trap and it can be overwhelming for even the best in the world. When the legs go and/or the mind gets fatigued, there’s no telling what misadventures await.

BEN EVERILL: Apparently I’m getting comfy on this fence… Once again, case by case. But I will say this – I left Westwood on my bench on my fantasy team because I am expecting him to have a fatigue hit for sure after two weeks right up amongst it. I was going to leave him out altogether but at the last-minute thought it fair to reward him slightly. I think the winner this week will be a guy who made the cut at THE PLAYERS but wasn’t exactly in the thick of it.

ROB BOLTON: If it were only that simple! Despite the danger at TPC Sawgrass, par is a better score at PGA National, so the mindset is different. PGA National is the hardest par 70 of the non-majors whereas TPC Sawgrass is a stock par 72 with numerous soft spots. I don’t correlate the two tracks, so if there’s carryover of good form, it’s more of a coincidence than it is a reliable indicator. I also think of how this is an unprecedented sequence of these courses as hosts in consecutive weeks and how professional golfers know how to disengage in between, but I won’t argue that expectations are higher for the 10 guys who recorded a top 25 at TPC Sawgrass and who are committed to the Honda.

JEFF BABINEAU: You can expand the theme to the entire Florida Swing, which this month also included the WGC-Workday event at The Concession, in Bradenton. It’s tough, and there is water everywhere. The sunshine is nice, but this stretch really can really beat up a player. Nobody shot lower than 71 in the final round of the Arnold Palmer Invitational, and we saw how difficult TPC Sawgrass played on Sunday, when it was at its firmest. PGA National is another track that can expose a golfer’s flaws. It’s a brand new week, but anyone who is coming in with momentum from THE PLAYERS has an edge, for sure.

For some reason there are a handful of players who have won The Open Championship who also have won Honda, among them Rory McIlroy, Padraig Harrington and Todd Hamilton. Why is that?

CAMERON MORFIT: It’s got to be the wind. That’s the only commonality I can think of, other than the fact that the Open rota courses also have 18 holes. They don’t even drive their Hondas on the same side of the road over there! By the way, we can throw Justin Leonard and Mark Calcavecchia on that list, too.

BEN EVERILL: Wind. Wind. Wind. The ability to control your ball flight in the wind is paramount at Honda most years and of course is a huge part of any Open Championship. The other thing I will say is resilience. You need to be able to handle bad breaks well. You know you’ll get a couple, but you have the choice of moving forward or wallowing in self-pity.

ROB BOLTON: This has been a “thing” in fantasy for a long time, and that includes when Hamilton won at Mirasol (in 2004). If I was going to present a theory, it’s that, by this time of year, the most talented internationals historically have made their way to the U.S. in earnest, so the sample size for the potential of the correlation is stronger than, say, in January on the West Coast Swing. The same internationals also tend to favor tougher tracks to help prep for what’s ahead. Whatever the case, what transpires this week could be useful when The Open rolls around in mid-July.

JEFF BABINEAU: Because Palm Beach is so well-known for its haggis? Certainly, flighting one’s golf ball is a big key in the wind, be it on a water-protected golf course or upon the baked-out fairways of any course in the Open rota. When the wind blows, it becomes more of a ball-striker’s week than a hot putter’s week.

Scott won here five years ago despite making a quadruple-bogey 7 at the 15th hole in round three. What’s the worst mishap you’ve seen a TOUR winner overcome?

CAMERON MORFIT: I covered Fowler’s victory at the Waste Management Phoenix Open a few years ago and let me tell you the wheels were not falling off, they were off. That he managed to get them back on and get across the line is one of the more impressive things I’ve seen in the heat of competition. It was a monumental triumph of will, because not much was going right.

BEN EVERILL: It doesn’t fit the same profile, but when Kyle Stanley bombed on the 72nd hole at Torrey Pines but won in Phoenix the next week was pretty stout. Seeing Jason Day collapse at the U.S. Open in 2015 with vertigo, and spending time with him that evening, I figured he had zero chance to play the third round. But he did and found his way into the final group. Sadly, the effects caught up Sunday.

The worst one for me personally was Matt Jones in the 2019 Australian Open. Let’s just say a rookie play-by-play radio announcer misinterpreted a question from Jones and gave wrong info on the final hole, giving Jones the thought that bogey was enough to win. Only when he reached greenside did both parties realize the miscommunication. In fact, now he had to get up and down from a tight lie to win. With every reason to feel aggrieved, Jones could’ve found a way to lose. Instead, he got the job done. I can tell you that announcer was really sweating the 4-foot putt to win it all.

ROB BOLTON: This almost is an unfair question because golf can be unforgiving and to expect anything inside the ropes is to open the door to failure. Certainly, there are many examples that slip my mind, and it’s easier to recall the ones that got away like Stanley (see Ben’s answer) and Jean van de Velde at Carnoustie in 1999 to name only two, but to cite the worst is relative. For example, we’ll never know how the Sunday of the 2012 Ryder Cup would have transpired if Rory McIlroy wouldn’t have made it to his tee time with Keegan Bradley. (McIlroy won 2 and 1 and Europe famously erased a four-point deficit entering Singles to win the team competition by one point.) This is a terrific question for Twitter, so if you’re reading this and you’re compelled to respond, please do. Thanks.

JEFF BABINEAU: David Toms once stepped up to the 18th tee at Quail Hollow (2003 Wachovia Championship) leading by six shots on Sunday and still had to sweat out the victory, finishing with a quadruple-bogey 8 that trimmed his winning margin to two. People forget that steely closer Tiger Woods finished bogey-bogey in regulation at the 2005 Masters before defeating Chris DiMarco in extra holes. And Padraig Harrington hit not one, but two balls into the Barry Burn at Carnoustie in 2007, scrambled for a double, and still held on in extra holes to defeat Sergio Garcia and capture the first of back-to-back Open titles. Three tough finishes, three nice trophies.