THACKERVILLE, Okla. – The belt is once again back in Sandra Carlborg’s possession.

Carlborg uncorked a 320-yard drive that turned out to be the decisive shot, edging the 316-yard effort of Heather Manfredda to win the women’s division at the Volvik World Long Drive Championship.

The win is Carlborg’s fifth world title, as the Swede also took home top honors in 2011, 2012, 2014 and 2015. This extends her existing record for most women’s titles and matches Jason Zuback for the most in long drive history by any player.

“I’m so happy. I’ve been working so hard the last year since last world (championships),” Carlborg said. “I can’t describe how happy I am.”

Carlborg set the early mark in the head-to-head finals, but it appeared for a moment that Manfredda was up for the challenge. The 2013 world champ hit a towering drive with her fifth shot in the eight-ball set, but it stopped just a few yards short of Carlborg’s total.

“I got real pumped up over that one. I hit it good, but it didn’t kick down there like I wanted to,” Manfredda said. “I swung hard and hit the center of the club face, and I know that last year I didn’t. I hit my ball, it just wasn’t as far as hers.”

Manfredda advanced to Wednesday’s final at the Winstar World Casino and Resort in dramatic fashion when defending champ Phillis Meti didn’t get off her final shot before the clock ran out. But in the last match, she couldn’t keep up with Carlborg, 33, whose name continues to be synonymous with dominance in the world of women’s long drive.

“It’s amazing. The sport is growing all the time, and it’s bringing out new girls, and I love it. It’s so much fun,” Carlborg said. “It’s a different competition now. There are more girls, and they’re so good, all of them. So this one means a lot.” 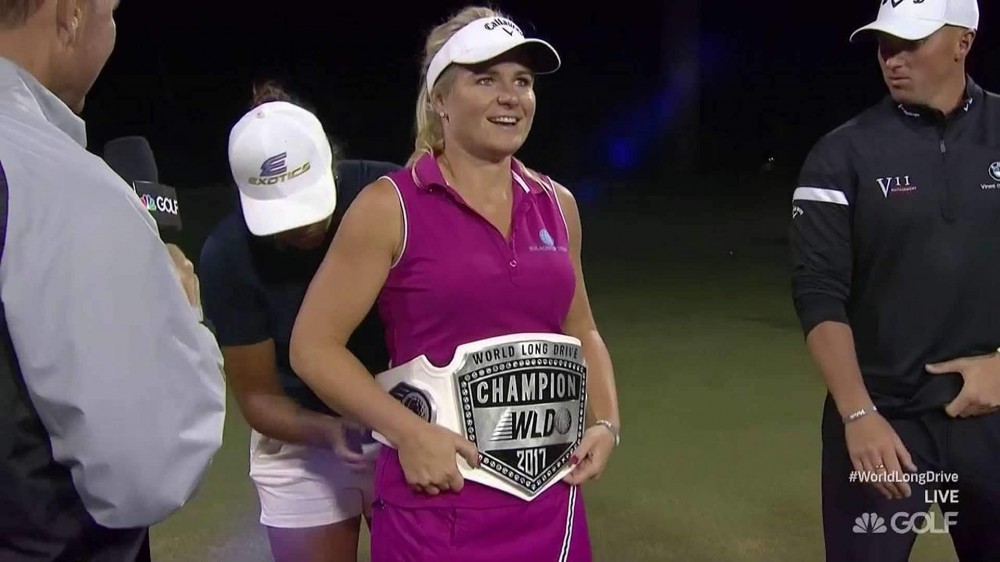 Kang on cheating allegation: 'I did the right thing'