GolfBuddy PT4 GPS Review – The Golf Buddy PT4 was launched as a ‘smartphone inspired GPS and it is easy to see why.The screen is the same height and a little bit wider than an iPhone 5 at 8.5cm x 5cm. If you measure it diagonally like a TV, it is also 4 inches in diameter from corner to corner, hence the 4 in the PT4 name. 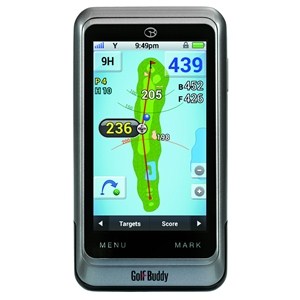 In addition the PT4 body is also the same height and just a little deeper too, so even the shape is smartphone like. Compared to the previous GolfBuddy World Platinum, the PT4 looks like it has been sat on, as it is 2cm taller but 30% slimmer.

What this extra size gives you is a much larger, hi-res LCD screen that shows the course graphics in bigger and brighter detail than the World Platinum, which required a lot of zooming in and out.

GolfBuddy has also upgraded the screen to capacitive touch rather than the pressure touch screen on the World Platinum. This Is significantly better as all the navigation is on the screen and the reaction time to commands is twice as fast as the World Platinum. If you are used to smartphones like the iPhone, then the touchscreen is quite not as responsive as that, but it is still one of the best in the GPS market at present.

The biggest benefit of the larger more responsive screen is that controlling the PT4 is much easier, especially if you suffer from FFS (Fat Finger Syndrome). When you move your finger over the hole to change the cursor position, the marker stays above your finger and the screen is big enough so you can still see what you are doing.

As usual with GolfBuddy, the menu system is intuitive, logical and well laid out and the best thing you can say is that it hardly needs an instruction manual to control most of the basic functions, so that will keep us non-manual reading blokes happy.

The navigation menu has also been improved and in functions like the Preview Mode it is now much easier to select your course using a search function rather than the endless scrolling of the World Platinum. This is ideal for viewing a course you are going to play in the future, as you have full functionality as if you are playing it, even if you don’t have a satellite signal.

The bigger screen also allows for better display of the data on the course and I particularly liked the back and front yardages for the green showing on the main screen under the middle yardage, as that saves having to toggle back and forward from the green view.

The other enhancement on the main screen is when you click ‘Targets’ in the menu at the bottom, things like bunkers have a front and back distance, so you can see what you need to do to lay up or carry it.

The Touchpoint indicator for layups really comes into its own for FFS sufferers on the larger screen. As you slide the marker up and down the hole, it shows you the distance to the selected point and then the remaining distance to the hole. If you want to ignore the marker you will have to wait 5 seconds for the marker to go blue and then double tap the screen, which can get frustrating, but the functionality is worth it.

The green view is also better on the bigger screen and the dynamic green view adjusts the front and back yardages to match the angle that you are approaching the green from, which is ideal. You can also move the flag around the green so the middle yardage figure changes to the yardage to the selected flag position.

The advantage of this is if the pin sheet says the flag is 10 yards on and 10 yards from the left then that you can set the flag position before you play the hole and then the front, flag and back yardages will adjust accordingly. It’s a bit more effort, but could be very useful on courses with odd shaped greens.

The scoring function has also been enhanced so you can record the scores of up to 4 players on the scorecard which has the sorecard for every course on the device pre-loaded.

You can use this to record stats for fairways hit/missed left or right, greens in regulation, putts and sand saves but only for one player. The functionality is good, although to save time I would like to see a default of ‘fairway hit’ and ‘green hit’ rather than having to select one every time from a blank option.

Your scores can then be uploaded to your GolfBuddy Manager account online, but you will need a computer with a USB connection to do this. The online scoring section then allows you to do some top level analysis on your game over the last 5 or 10 rounds. It all works fine, but is a little bit of a ‘nice to have’ as if you are serious about tracking scores then there are many online and app based services which do a much better job without having to connect a GPS up to the web.

The only real issue that FFS sufferers may find was in turning the device off. The power button on the side also doubles up as the screen lock/unlock and I kept locking it when trying to switch it off. It seemed holding the top half of the button down for a second or two brought the power off command up on screen. Donations to the FFS helpline can be made online.

The PT4 comes in a smartphone type box with a cradle, USB cable and a rather antique looking pair of adapters if you are going to charge via the mains. The cradle can also be used to protect the screen in transit by reversing it to cover the front of the device before you put it away, which is a must with the larger screen as it not protected by the body of the device like the recessed screen of the World Platinum.

However the plastic cradle it is not very shockproof and unlike smartphones there are no protective cases for it, so be careful you don’t drop the PT4 on a hard surface like a car park or cart path as it will have a smartphone-like crack right across its screen.

The battery charging time from empty was around 3 hours 15 minutes and you can get at least 2 rounds in a day from a single charge. Two rounds on two different days is just about possible, but it is best to charge the PT4 each night.

Whilst there is enough charge for you to use out of the box and it is ready to go, it is advisable to connect the PT4 to your computer after buying to get any updates to the system software and courses via the GolfBuddy Manager software, which is installed automatically from the internet.

With over 37,000 courses worldwide to choose from the database is huge and should have your course. Generally the accuracy is good with the majority of courses verified by walking and the rest mapped via satellite images.

The big benefit of all Golfbuddy’s is the cost of ownership as there is no annual subscription and therefore your investment in the device is all you need to pay for.

Overall I think the PT4 is an excellent GPS and the best full size screen device they have done. The bigger screen is much more user friendly and allows more information to be clearly shown, like the green front and back on the main screen.

Thankfully GolfBuddy have resisted the temptation to add in every bell and whistle possible, such as total distance walked or pedometer type information. Instead they have stuck to the core functions of golf course shot information with a bigger more responsive screen and as a result you get a high quality GPS for a one-off cost that provides everything you need quickly and without fuss.