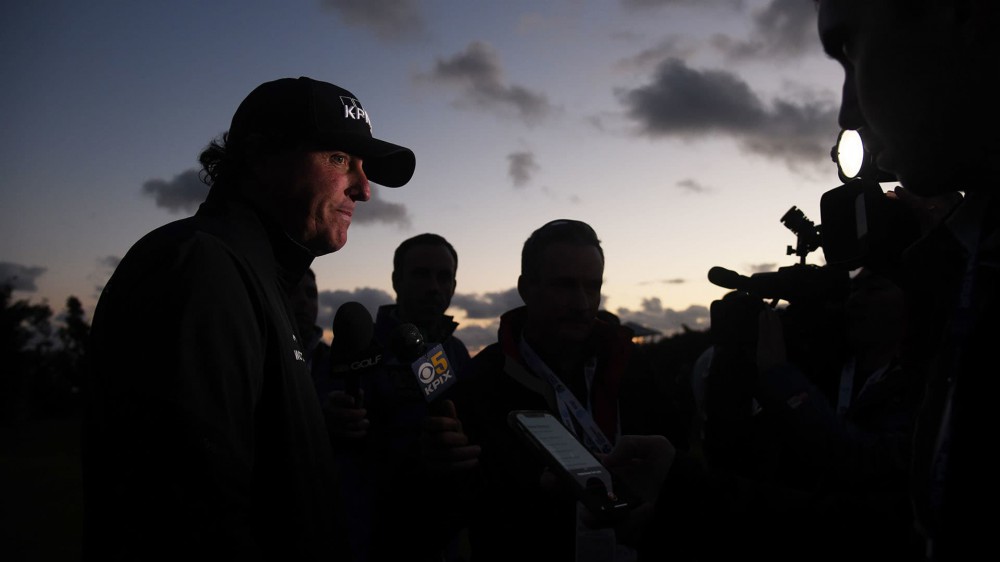 That would explain his pressing PGA Tour official Mark Russell and Paul Casey to finish the final two holes of the AT&T Pebble Beach Pro-Am Sunday with darkness falling hard across the seaside course.

That, and Mickelson wanting to keep his momentum going in a bid to close out his 44th PGA Tour title, his fifth in this event.

Three down to Casey at the start of the day, Mickelson was three shots up and had just holed out for par at the 16th when play was suspended.

“I can see fine,” Mickelson said behind the green, with Russell in the middle of the discussion with Casey. “I can see playing, but…”

But Casey marked his ball at the 16th, where he insisted it was too dark to continue playing. He’ll have a 3-footer for par there when play is scheduled to resume Monday at 8 a.m. PT.

“I genuinely couldn’t see my putt there on 16,” Casey said. “Mark Russell gave us the option to finish, which is why I marked it.”

It’s down to just Mickelson and Casey. There’s nobody else left on the course.

Mickelson was pushing the pace of play hard through the last half of the back nine, after he took a three-shot lead with a birdie at the 13th.

“I have pretty good vision,” Mickelson said. “I can see fine, and I’m playing well. So, I wanted to continue, and that’s all there is to it.”

“But I totally get where he’s coming from,” Mickelson said. “And in all honesty, it’s probably a good thing, because now we’ll play the last couple holes in pure conditions and it will be helpful for us both.”

Scott Piercy,  just in front of Mickelson and Casey, demonstrated the danger of finishing in the dark. He three-putted the 18th trying to finish, jacking a 20-foot putt about 7 feet past the hole, and then missing that and making a costly bogey. The miss dropped him from a tie for seventh to T-10, which will cost him a big chunk of money when checks are cut Monday.

“I’m surprised we got this far,” Casey said.

Mickelson gets delaying the finish, but…

“I wish we could do it tonight,” he said.