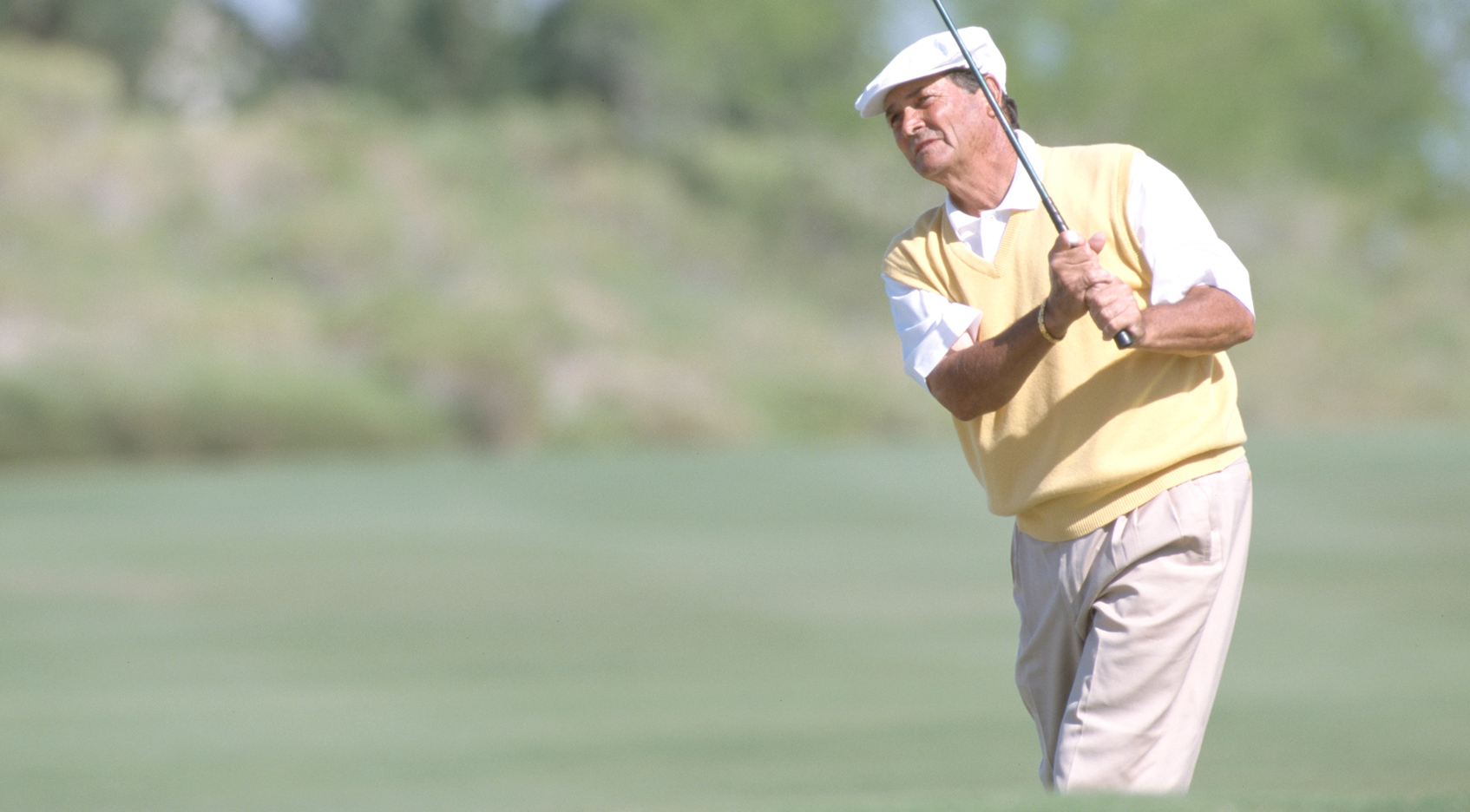 Jimmy Powell played golf in high school and graduated in 1953 from Dallas’ Sunset High, the same school that produced major winner Don January. When it came time for Powell to choose a college, he elected to play for North Texas State’s powerhouse golf program, the same one  January helped win four consecutive NCAA titles from 1949 and 1952. While Powell didn’t enjoy the same college or professional golf success as his fellow Bison and Mean Green alum, he did make it to the PGA TOUR and enjoyed a strong career as a PGA club professional before breaking through to win four times on PGA TOUR Champions. Powell, a Dallas native who spent most of his adult life living in California, passed away in La Quinta on January 16 of kidney failure. He was a day short of his 86th birthday.

As a senior, Powell was part of a trio that made North Texas a favorite to win another national title in 1957. Alongside Harold Sexton and Dick Whetzle, who both went on to short PGA TOUR careers, North Texas State battled all week for the NCAA Championship at The Broadmoor in Colorado Springs before the team finished third, four shots behind champion Houston. Powell fell short of the Cougars’ Ron Baxter in the individual competition.

Following college, Powell turned pro and played in his first PGA TOUR tournament, the 1959 U.S. Open. He made his first cut five months later, at the Lafayette Open, where he tied for 23rd. Powell earned conditional TOUR status for 1960, playing in 12 events but only making three cuts. His only full seasons on TOUR came in 1962 and 1963, combining for 43 starts during those two years. He had two top-10s in 1962 but waited until 1968, when he overcame a second-round 76 at the Andy Williams-San Diego Open to post his career-best showing, a sixth-place performance. He finished five shots behind winner Tom Weiskopf.

The long-time Riverside, Yorba Linda and La Quinta resident had considerable success playing PGA section events in California while serving as the head pro at Indian Hills Golf Club—a course Powell co-designed with Harold Heers—and Via Verde Country Club. Powell won the Southern California PGA Championship three times, beginning in 1968. That year, he routed Ron Reif, 9 and 8, in the match-play finale. Powell won again two years later, defeating Pinky Stevenson, 2 and 1. He added a third title, in 1975, defeating Denny Meyer, 1-up, coming back over the final 18 holes, a rally that included a 45-foot chip-in and back-to-back birdies that allowed him to pull ahead for good. During the time leading up to his 50th birthday, Powell was the head pro at Stevens Park Golf Course in Dallas.

Powell, born January 17, 1935, waited patiently to turn 50, knowing he not only would have access to PGA TOUR Champions for the 1985 season but that he had the game to compete. He appeared in nine tournaments in his rookie season, serving notice of what fellow competitors might expect—with a fourth-place finish at The Greenbrier American Express Championship in West Virginia, his best outing.

Powell was a regular Tour presence after that, piling up 127 starts before finally breaking through and winning at the 1990 Southwestern Bell Classic at Oklahoma City’s Quail Creek Golf and Country Club. Powell entered the final round tied for sixth, four shots off Terry Dill’s leading pace. All Powell did on the final day was shoot a bogey-free, tournament-best, 7-under 65 to cruise past the field and win by three shots.

Powell won his second tournament in 1992, and 65s were again a major part of his storyline. After opening with a 5-under 67 at The Vineyards in Naples, Florida, Powell posted a pair of 65s on the weekend to defeat Lee Trevino by four shots. Over his final 37 holes, Powell made 17 birdies.

Perhaps Powell’s two most impressive wins came after he had turned 60. He won the 1995 First of America Classic, routing Babe Hiskey by five shots. He then showed that winning past age 60 was no fluke when he captured the weather-shortened Brickyard Crossing Championship in Indianapolis at age 61. Powell opened the final round with four birdies on his first six holes and became, at the time, the second-oldest winner in PGA TOUR Champions history, behind only Mike Fetchick (age 63).

“At my age, you don’t go out expecting to win. But after the fast start, I started thinking I could win this,” Powell said to the assembled Indianapolis media after the victory.

Powell is survived by his wife, Delores, and the couple’s five children, daughters Holly, Sharla, Marla and Leann and son Tommy. He is also survived by 16 grandchildren and six great-grandchildren. Because of COVID-19 restrictions, there was no service, and Powell was cremated.