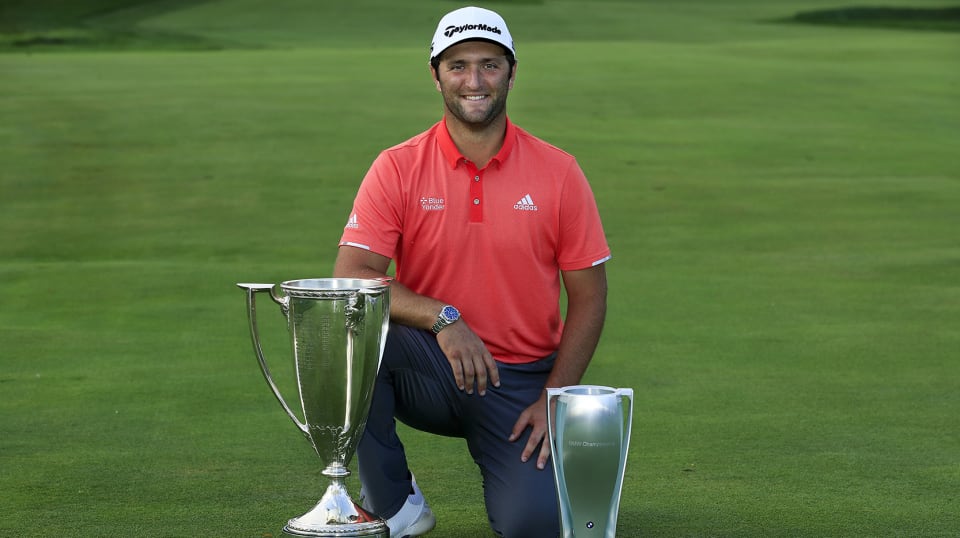 OLYMPIA FIELDS, Ill. – History told Jon Rahm there would be drama at Olympia Fields. But this time the Spaniard wasn’t going to let the place get the better of him.

Rahm knew it would take something like his incredible 66-foot birdie putt that snaked across the entire 18th green, over a ridge and down into the cup to win a playoff against Dustin Johnson for the BMW Championship.

Because strange things happen for the now 25-year-old at this venue.

Five years ago, a young Rahm came to the course that sits southwest of Chicago as part of the field for the 2015 U.S. Amateur. He was the world No. 1 in the amateur game and expected to be a huge factor.

But things did not come easy that week. First, Rahm needed to make two birdie bombs in his last three holes of stroke play just to make it into a playoff for the match play portion of the championship. He survived that playoff but needed 21 holes to get through the round of 64.

Having then pushed his way to the quarterfinals, Rahm looked headed for the final four when he sat 3 up with eight holes remaining against unheralded Derek Bard. Instead, he lost two straight holes and then power-lipped out a 5-foot putt on the 15th that would have reclaimed a 2-up lead. He missed from 4 feet on the next hole to be back square and then three-putted the 17th to go behind.

A hole later, he was eliminated in an upset.

So Rahm returned this week for the BMW Championship determined to make amends. That amateur story belongs to Bryson DeChambeau, who would go on to beat Bard in the final. But the story of the FedExCup Playoffs event will forever be Rahm’s.

It didn’t appear that would be the case for most of the week. Rahm started with a 5-over 75 and added a 71 the next day to sit 6 over. Then on the fifth hole Saturday, after back-to-back birdies, he inexplicably picked up his ball on the green before marking it. He was assessed a one-shot penalty, turning a par into a bogey.

It could have sparked the end for Rahm, who is known for wearing his passion on his sleeve. But instead, much like he did when penalized two shots on his way to winning the Memorial Tournament presented by Nationwide in July, Rahm remained calm. In fact, he zeroed in his focus and went on to shoot 66.

“I just hope I don’t lose by one,” Rahm said afterwards. “I’m just going to say that. I just hope. And if I do, well, very well my fault. It’s as simple as that.”

That night he and wife Kelley were talking, and the ball marking fiasco came up. Rahm reiterated the above statement but, as Kelley puts it, made a point to move on. If one thing happens one way, then chances are the next thing would be different to.

He vowed not to think about it as he tried to chase down a three-shot deficit. And he managed that as he went about shooting a sublime bogey free 6-under 64 to post in the clubhouse at 4 under. That “bogey” on Saturday was his last of the tournament that saw just five players finish under par.

But the moment eventually flashed back as Dustin Johnson played the final hole sitting a shot behind while Rahm tried to stay loose on the range.

“When they told me DJ had hit it on the green on the 18th hole and the situation. I was like, ‘That extra shot cushion would be extremely nice right now, I’m not going to lie,’ ” Rahm smiled.

“But at the same time, I don’t know if I would have won had it not happened. It kind of made me mad at myself, and I just went on with my focus after that and was able to play amazing golf and stayed aggressive.

“Maybe if I hadn’t, I would have two-putted and maybe stayed complacent. I don’t know because I had such a good start. I can tell you after that two-putt, making that 6-footer for bogey, I was like, okay, that’s it, no playing around, go. That’s kind of what mentally did it for me.”

It was that focus that allowed him to handle the fact Johnson made a ridiculously good 43-foot snaking downhill putt of his own to force the playoff. Because of course he would. He’s world No. 1 and the FedExCup leader who was coming off an 11-shot victory at THE NORTHERN TRUST. And this is Olympia Fields after all.

“Last time I had a wait having a one-shot lead with a couple groups to go was in Palm Springs, and Andrew Landry came in at 18 and made birdie and we went into a playoff. I reminded myself that anything is possible,” Rahm said.

“When they told me where DJ was putting from, I didn’t see it, I just knew he just had to get the ball rolling on the right direction and that putt was in, and I knew how good DJ has been playing I was expecting nothing else. I was fully confident it was going to come into a playoff and hoping to win it.”

What he wasn’t expecting was to win the tournament on the first playoff hole when Johnson split the fairway and he found the rough and consequently faced 66 feet for birdie to Johnson’s 33 feet. In fact, while he stalked the putt hoping to find the right line, his focus was on speed as the slick downhill effort was most likely to run past the hole and leave a tester for par. He need not have worried. It was like a magnet to the hole, much like Johnson’s earlier. When Johnson’s attempt to match ended up stopping just inches from the cup, it was over.

“Never did I think I would make another 60-footer, a couple of breaks in there to end up winning it,” Rahm beamed. “We all want the flashy finish, maybe not the stress that comes with it, but I set out to enjoy even the uncomfortable moments we had out there today, and man, it was fun. Pretty close to the best way to finish it.”

The win moved him to second in the FedExCup heading to the TOUR Championship. He was three behind Johnson starting Sunday. Next week he will start two behind as he chases the season long trophy.

And what a difference one stroke can make.