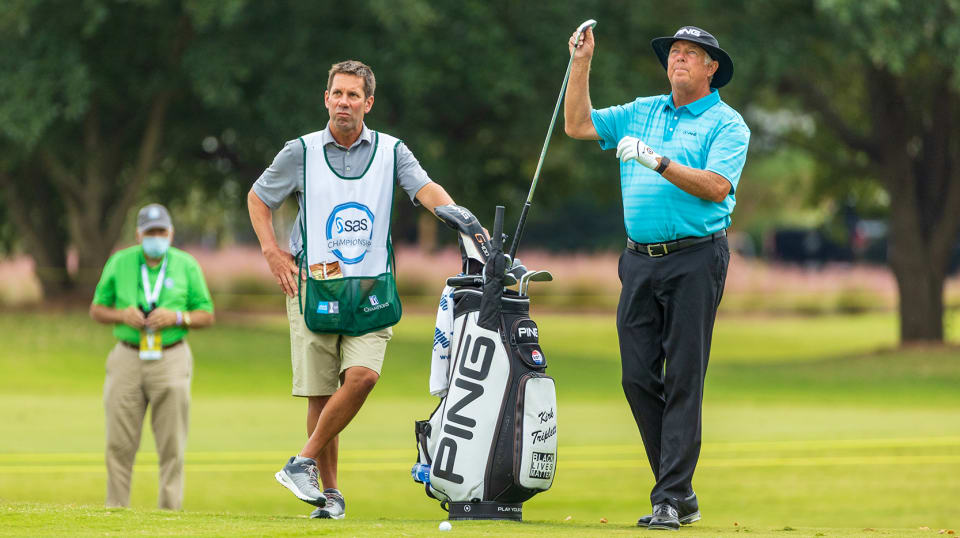 Kirk Triplett, he of the ever-present bucket hat, has had better years, golf-wise. He has three wins on the PGA TOUR and eight on PGA TOUR Champions – two of those in 2019.

But never had Triplett, 58, made news like he did when he put a Black Lives Matter sticker on his golf bag at the Bridgestone SENIOR PLAYERS Championship at Firestone Country Club in August.

“Just to say that I personally hear what’s going on and I’m in agreement that issues of racial equality and social justice need to be addressed,” he says of his decision to apply the sticker after the deaths of Breonna Taylor, George Floyd and others. It will remain on the bag as he finishes the season close to home at this week’s Charles Schwab Championship at Phoenix Country Club.

Sometimes the biggest statements start with the smallest gestures, and so it was with Triplett, who estimates he has given somewhere between 10 and 20 media interviews since his BLM sticker caught people’s attention. Mostly, he says, the response has been positive. Sometimes, he admits, it’s been virulently negative. But he’s not alone in the cause.

At the TOUR Championship in September, PGA TOUR Commissioner Jay Monahan pledged $100 million to support racial and social justice causes over the next 10 years. Charles Howell III is offering performance-based bonuses on the Advocates Professional Golf Association Tour, which aims to bolster diversity at all levels of golf. Then there’s Triplett’s large, square sticker, displayed prominently under his name on his PING staff bag.

The golfer and his family – wife Cathi; twin biological sons Conor and Sam, 24; and adoptees Alexis, 20, and Kobe, 18 – all had a say in the sticker, and they all agreed that the time was right. Kobe is African American, which took on new meaning given the high-profile events of last spring and summer, plus the fact that he had recently gotten his driver’s license.

What if he had an encounter with the police? What if someone misinterpreted a gesture or a comment? Who would deescalate? What would that look like? Who would be nominally responsible for a safe outcome, and on whose shoulders would it actually fall?

The complexity and urgency of these questions, and the fact that they would land on Kobe as opposed to Conor, Sam and Alexis, struck Triplett as unfair.

“We talked about it at home during the pandemic,” he says. “I had a lot of time off, and at the behest of a couple of my kids – the sticker was actually bought by one of my older sons. Because the message in my family is often, ‘OK, you’re talking a good game, what are you going to do?’ So he gave me the sticker and said, ‘Here’s this in case you’re ready to do something.’”

Triplett was. There was no freighted ceremony – he just put the sticker on the bag.

It didn’t take long to get noticed.