Patton Kizzire made par on the sixth extra hole to defeat James Hahn and win the Sony Open in the longest playoff on the PGA Tour in the last five years. Here’s how things finally ended after a whole lot of free golf Sunday in Hawaii:

What it means: This is Kizzire’s second PGA Tour victory after he won his first title earlier this season at Mayakoba. Playing in the final group with Hoge and Harman, Kizzire parred his first nine holes in a row before going eagle-birdie at Nos. 10-11. He dropped his only shot of the day at 13 and parred his way into the clubhouse to tie Hahn at 17 under after missing a birdie putt on the 72nd green that would have won him the tournament in regulation. Kizzire had an opportunity to win on the fourth extra hole, when he missed a birdie, but had to dodge four other tournament-winning attempts from Hahn. Finally, on the sixth extra hole, at the par-3 17th, Kizzire two-putted from the fringe to take the title. The No. 1 player on the Web.com Tour money list in 2015 now sits atop the FedExCup points standings in 2018.

Best of the rest: After posting 17 under well ahead of the final group, Hahn waited out multiple groups before finally returning to the 18th tee to face off with Kizzire. Hahn had four different opportunities to win in the playoff but missed four different putts, including a 6-footer for birdie on the fifth extra hole, any of which would have ended it. His putter failed him one last time on the final hole, when he failed to get up and down from off the green, his par putt lipping out. This is Hahn’s first playoff loss on the PGA Tour following triumphs at Riviera in 2015 and at Quail Hollow in 2016.

Round of the day: Seven back to start the day, Hahn vaulted up the leaderboard with an 8-under 62, the low round of the week by one. Hahn made nine birdies – including six in a seven-hole stretch from Nos. 8-15 – against a single bogey. This is the two-time Tour winner’s best finish since a solo third last May at the Byron Nelson.

Biggest disappointment: The 54-hole leader, Hoge missed a 9-foot birdie putt on the 72nd that would sent him to extra holes with Hahn and Kizzire. Two under on his day through 15 holes, Hoge came undone at the 16th hole when he failed to find the green from a greenside bunker and then failed to get up and down from the rough, resulting in a double-bogey-6. An even-par 70 in the final round left him in solo third, netting him his best career finish on Tour.

Shot of the day: This hole-out from Kizzire at the par-4 10th.

Not a bad time for your first of the week! Kizzire moves into a tie atop the leaderboard with Hoge.#QuickHits pic.twitter.com/myzKBhFLS2

Little did he know then that we would need to play 14 more holes to win his second PGA Tour title. 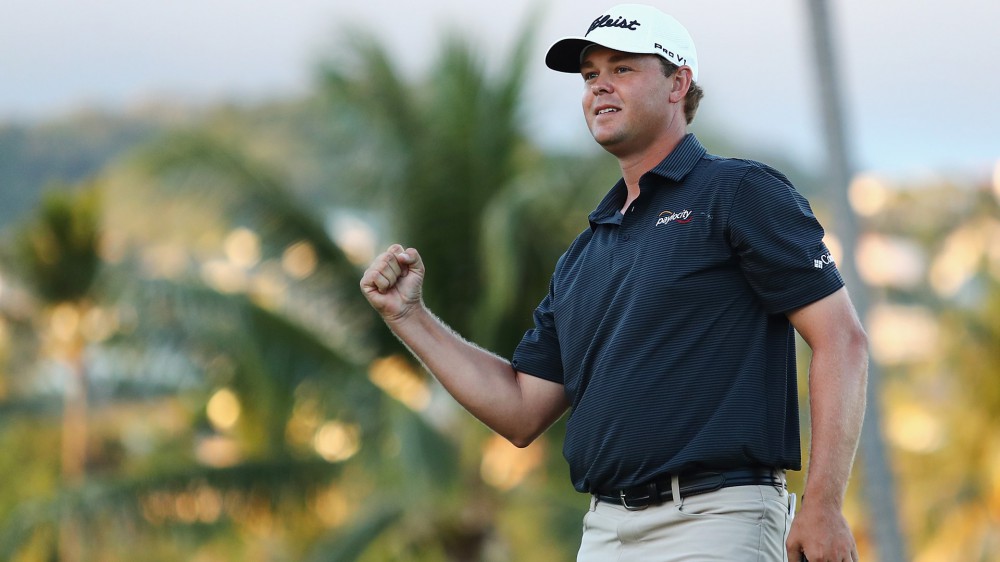 Wie with Kang; Lexi on the bench Friday afternoon