FARMINGDALE, N.Y. – After playing the first two rounds alongside Tiger Woods and building a seven-shot lead through 54 holes, Brooks Koepka received plenty of support from the raucous crowds gathered at Bethpage for the PGA Championship. But around these parts, even the Yankees get booed during a losing streak.

Such was the case Sunday, as Koepka’s seemingly insurmountable lead dwindled to a single shot after the defending champ rattled off four straight bogeys on Nos. 11-14. It left Koepka in a state of “shock,” with Dustin Johnson closing the gap two holes ahead of him, and it sparked an abrupt turn among the fans lining the closing stretch on the Black Course.

While some shifted their support to Johnson, who had closed the gap with a birdie on No. 15, others opted to vocally root against Koepka as he trundled down the large hill toward the 15th tee box.

“I thought it was pretty weird how they were telling Brooks to choke. That’s not my cup of tea,” said Harold Varner III, who played the final round alongside Koepka. “I was pulling for him after that. I have a few choice words for that.”

Koepka steadied the ship with a par on No. 15, and after a pair of Johnson bogeys he eventually won by two shots. Admitting that he “half-choked” during his back-nine bogey barrage, Koepka shared that the negative energy from the fans actually fueled him over the final few holes as he sought to keep Johnson at bay.

“I think I kind of deserved it. You’re going to rattle off four in a row and it looks like you’re going to lose it; I’ve been to sporting events in New York. I know how it goes,” Koepka said. “I think it actually helped. It was at a perfect time because I was just thinking, ‘OK, all right, I’ve got everybody against me. Let’s go.’” 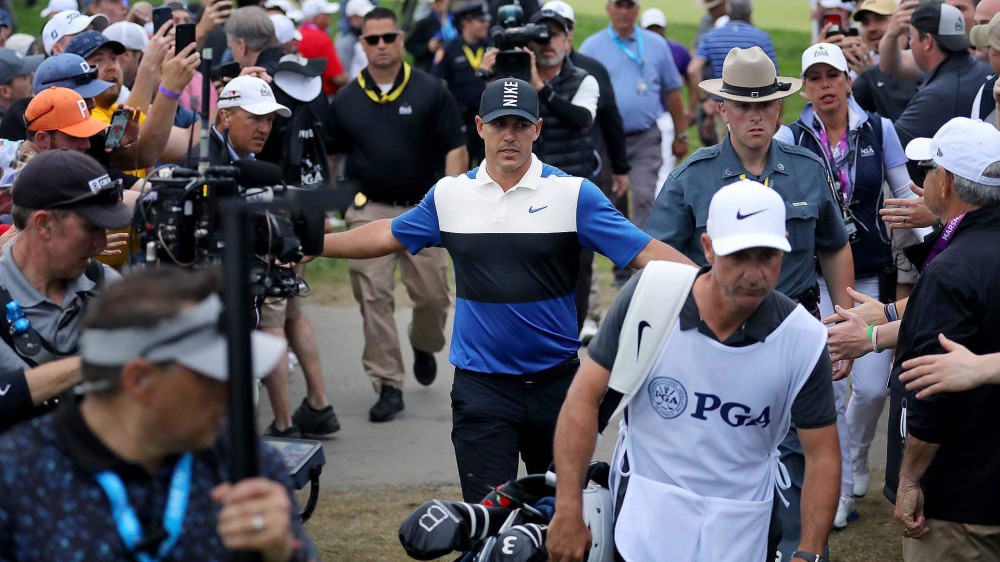