Amidst the roars and the challenges and acute pressure, Brooks Koepka bullied through it all to win his second major of the season at the 100th PGA Championship. Here’s how the action-packed and emotionally charged final round played out at Bellerive Country Club.

What it means: Sunday in St. Louis, it was Koepka who established the narrative. Woods was making a spirited run for his first major victory in over a decade. Thomas was trying to successfully defend his title. Scott was attempting to produce an inspirational triumph. But, in the end, it was Koepka who kept his nerve, outplayed the field and never wavered as a raucous crowd exalted every birdie around him. Brooks Koepka is the dominant major force in today’s game. Undeniably so.

Round of the day: There were a few lower scores in the final round, but none were more impressive than Koepka’s 66, which included six birdies and two bogeys. Most impressively was what happened down the stretch. Scott had tied Koepka through 14 holes and Woods was one back. Koepka then birdied two consecutive holes to add the Wanamaker Trophy to his pair of U.S. Open titles. 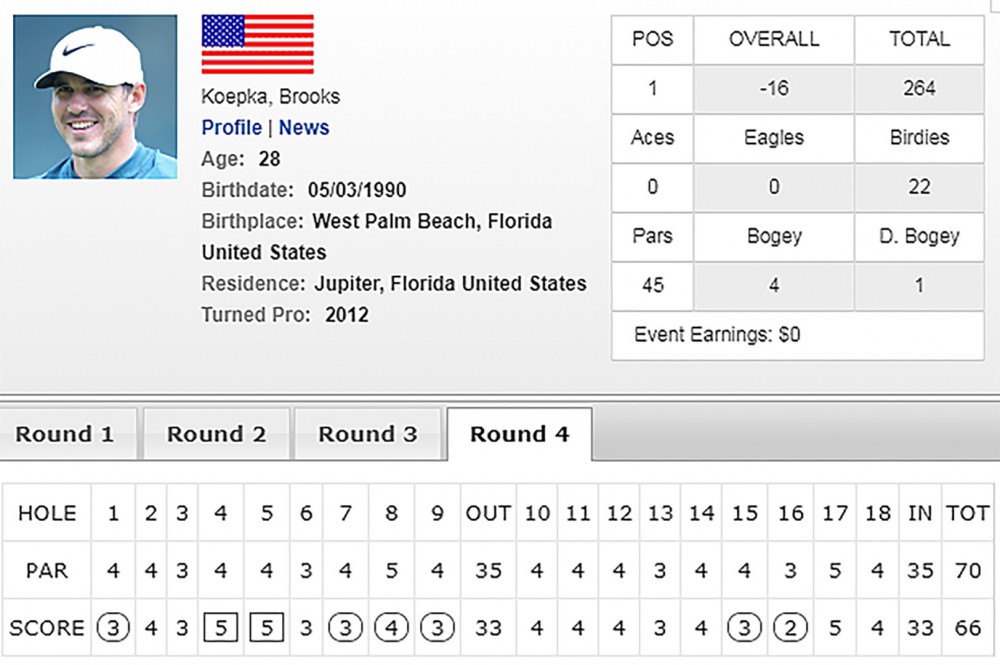 Best of the rest: Woods had 10 years of major weight on his shoulders and he produced a 6-under 64, tying for the low round of the day. His round included eight birdies, two bogeys and so many near-misses. An electric crowd tried to help lift him to major No. 15 and he might have gotten it, had it not been for an unwavering Koepka.

Biggest disappointment: It’s Sunday in a major and, once again, this dubious distinction goes to Rickie Fowler. He was three back to start his round and didn’t make a birdie until the 13th hole. It was his only one of the day, in a 1-over 71. He tied for 12th.

Shot of the day: Let’s pick two! After missing three consecutive birdie putts inside 12 feet, Koepka drained a 10-footer for the outright lead at No. 15.

Brooks Koepka (-15) takes the lead at the 15th with a birdie #PGAChamppic.twitter.com/EnELJDx0We Monahan on PGA-LPGA event: 'Just a matter of time'