JERSEY CITY, N.J. – What looked like a foregone conclusion finally became a reality Sunday, as the United States finished off its dominating performance at Liberty National with a decisive, 19-11 victory over the Internationals.

Daniel Berger delivered the clinching point for the Americans, who improved to 10-1-1 in the biennial event.

Here are the match-by-match results from Liberty National:

Kevin Chappell (U.S.) vs. Marc Leishman (International), halved: Leishman had a chance to earn a full point for the International side, but he three-putted from the back fringe on 17 for bogey. On 18, he was fortunate to even escape with a halve, after Chappell narrowly missed his birdie putt.

Jason Day (International) def. Charley Hoffman (U.S.), 2 and 1: It’s been a rough go the past two Presidents Cups for Day, but he won three consecutive holes to begin the back nine to hold off Hoffman. The former world No. 1 is now just 1-7-2 in his last two cup appearances.

Hideki Matsuyama (International) def. Justin Thomas (U.S.), 3 and 1: The Japanese star looked lost for much of these matches, but he managed to pull it all together against the presumptive PGA Tour Player of the Year. Racking up seven birdies and an eagle, he managed to eek past Thomas (who made eight birdies of his own) to give the Internationals a win when the outcome was already secured. Together, they combined for 15 birdies and an eagle.

Daniel Berger (U.S.) def. Si Woo Kim (International), 2 and 1: One of the Americans’ six rookies, Berger traded birdies and fist pumps with The Players champion until his halve on the 15th hole clinched the cup for the U.S.

Charl Schwartzel (International) def. Matt Kuchar (U.S.), 1 up: Kuchar actually did well to extend this match to 18, after he was 4 down with seven holes to play. But Schwartzel’s par on the last was enough to earn the full point. Kuchar is now just 1-7 in singles matches.

Adam Scott (International) def. Brooks Koepka (U.S.), 3 and 2: Trying to avoid a winless cup, Scott won four holes in a row on the back nine – three with concessions from Koepka – to knock off the U.S. Open champion.

Louis Oosthuizen (International) def. Patrick Reed (U.S.), 1 up: Tasked with taking on Captain America, the sweet-swinging South African won the 17th with a birdie, then earned a conceded birdie on 18 to steal the match after Reed sent his tee shot wide left on the closing par 3.

Dustin Johnson (U.S.) vs. Branden Grace (International), halved: The world No. 1 surrendered a late lead, but he became the only player on either side to go 4-0-1 this week, going back and forth with the South African until they halved the 18th hole with a par.

Jhonattan Vegas (International) def. Jordan Spieth (U.S.), 2 and 1: And it could have been worse. Vegas opened up a 4-up lead with four to play, but Spieth did well just to reach the 17th. Though he’s proven to be a formidable team player, remarkably, Spieth dropped to 0-5 in Ryder/President Cup singles.

Rickie Fowler (U.S.) def. Emiliano Grillo (International), 6 and 4: One of the lone bright spots on an otherwise rough day for the Americans, Fowler watched his lead swell with wins on four of the first five holes on the back nine. It was the U.S. team’s most convincing victory Sunday.

Kevin Kisner (U.S.) vs. Anirban Lahiri (International), halved: Indicative of his team’s day, Kisner coughed up the lead with bogeys on the last two holes to squander the opportunity for a full point.

MATCH 1: Jordan Spieth-Patrick Reed (U.S.) def. Jason Day-Louis Oosthuizen (Internationals), 2 and 1: Oosthuizen almost single-handedly kept the Internationals alive in a match where neither team ever held more than a two-hole lead, but Spieth’s 10-foot birdie on the 17th concluded the match. Spieth and Reed were 2-0-0 on the day to improve their career Presidents Cup/Ryder Cup record to 8-1-3.

MATCH 2: Daniel Berger-Justin Thomas (U.S.) def. Jhonattan Vegas-Hideki Matsuyama (Internationals), 3 and 2: The Internationals won the second, third and fourth holes, then didn’t win another hole. Berger became the last U.S. player to win a match this week. Matsuyama dropped to 0-2-1 this week and 3-6-3 in his Presidents Cup career.

MATCH 3: Anirban Lahiri-Si Woo Kim (Internationals) def. Kevin Chappell-Charlie Hoffman (U.S.), 1 up: Hoffman chipped in for birdie on the 17th hole, triggering a wild celebration, but Lahiri birdied on top of him to keep the Internationals 1 up going to the 18th, where the U.S. conceded Lahiri’s par putt for a halve of the hole. It was Lahiri’s first career Presidents Cup win after four losses.

MATCH 4: Brooks Koepka-Dustin Johnson (U.S.) def. Marc Leishman-Branden Grace (Internationals), 3 and 2: In a match where the U.S. never trailed, DJ improved his record to 4-0. He is looking to become only the sixth player to go 5-0-0 in a Presidents Cup.

MATCH 1: Jordan Spieth-Patrick Reed (U.S.) def. Jason Day-Marc Leishman (Internationals), 4 and 3: Leishman pulled his opening tee shot into the water, and things didn’t get much better from there for the Aussie duo. While the match was all square through 11 holes, Spieth and Reed closed things out in style with four straight birdies to put the first point of the day on the board. The Americans are now 7-1-3 when paired together, while Day’s individual record in Presidents Cup foursomes drops to 0-5-3.

MATCH 2: Matt Kuchar-Dustin Johnson (U.S.) def. Adam Hadwin-Adam Scott (Internationals), 4 and 3: The U.S. team won the first hole with a par and that set the tone for the morning session. Kuchar and DJ made only three birdies over the span of 15 holes but it was easily enough to secure a comfortable victory. They led, 4 up, at the turn and were never threatened. This American tandem won both of their foursomes matches this week and DJ is now 5-0-1 in the format in this competition.

MATCH 3: Kevin Kisner-Phil Mickelson (U.S.) def. Emiliano Grillo-Jhonattan Vegas (Internationals), 2 and 1: The Americans won the first hole but it was close throughout. It was all square until Grillo and Vegas bogeyed the par-4 14th. The U.S. team kept that lead through 16 holes and sealed the match with a big Kisner putt at the 17th. Mickelson and Kisner at now 2-0-1 this week.

MATCH 4: Justin Thomas-Rickie Fowler (U.S.) vs. Louis Oosthuizen-Branden Grace (Internationals), halved: The only morning foursomes match that reached the 18th hole. Thomas and Fowler handed Grace and Oosthuizen their first Presidents Cup loss as a team on Friday. On Saturday, the International side led by as much as 2 up and the U.S. by as much as 1 up, and it was all square for the final seven holes. With the away team in for par on the last, Thomas had 5 feet to halve the match and got his putt to circle in.

MATCH 1: Jordan Spieth-Patrick Reed (U.S.) vs. Hideki Matsuyama-Adam Hadwin (Internationals), halved:  Trailing 2 down on the back nine, the Americans’ most successful staged a late rally to steal a half point from the struggling Matsuyama and rookie Hadwin. Spieth and Reed, who have now gone 6-1-3 as a team, made back-to-back birdies on 15 and 16 and had opportunities on the last two holes to earn the full point, including Spieth’s 20-footer on 18 that spun around the cup.

MATCH 2: Justin Thomas-Rickie Fowler (U.S.) def. Louis Oosthuizen-Branden Grace (Internationals), 3 and 2: Quickly turning into the Americans’ best duo, Thomas and Fowler handed Oosthuizen and Grace their first loss in team play (5-1). They played 7 under as a team, and Thomas helped put away the Internationals with some dazzling short-game shots, first a touchy up and down on 12, a holed bunker shot on 14 and then an 8-foot birdie putt on 15.

MATCH 3: Phil Mickelson-Kevin Kisner (U.S.) def. Jason Day-Marc Leishman (Internationals), 1 up: Going head-to-head for the second straight day, Mickelson didn’t miss on the final green this time. Burying a 15-footer on the last, the 47-year-old gave the Americans their first lead of the day and a full point after Leishman missed his 10-footer. These two teams squared off Thursday, with Mickelson missed an 8-footer on the last for the win.

MATCH 4: Charley Hoffman-Kevin Chappell (U.S.) def. Charl Schwartzel-Anirban Lahiri (Internationals), 6 and 5: After sitting out the opening foursomes, the American rookies pounced all over the overmatched International squad. Taking a 5-up lead at the turn, Hoffman buried the Internationals with a par on the drivable 12th, after getting up and down from 270 yards. Schwartzel has now been trounced in both of his matches this week, while Lahiri, who was disqualified from playing the third hole Friday after taking a practice shot out of a bunker, is now 0-4 in Presidents Cup play over the past two editions.

MATCH 5: Dustin Johnson-Brooks Koepka (U.S.) def. Adam Scott-Jhonattan Vegas (Internationals), 3 and 2:  The American bash brothers didn’t play their best for much of the match, but they still erased an early deficit with six birdies and held off Vegas and Scott to earn the final point of the day. Johnson buried a 20-footer for birdie on 15, then pured an iron to 10 feet on 16 to close out the match. It was Scott’s 19th match lost, the most in tournament history.

MATCH 1: Rickie Fowler-Justin Thomas (U.S.) def. Hideki Matsuyama-Charl Schwartzel (INT), 6 and 4:  After falling in an early hole, Fowler and Thomas, the presumptive PGA Tour Player of the Year, won four holes in a six-hole span to take a commanding lead on the International duo, which went out in 4 over. It didn’t get much better on the back nine, as Matsuyama, the International team’s best player, struggled mightily. Thomas won in his team debut.

MATCH 2: Dustin Johnson-Matt Kuchar (U.S.) vs. Adam Scott-Jhonattan Vegas (INT), 1 up: A tight match throughout, Johnson and Kuchar played bogey-free and broke out of a tie after Johnson’s 7-iron to 8 feet on 16 that was conceded for birdie. Johnson then closed out the match with another sweet 7-iron on 18, this one to 20 feet, to earn the full point for the Americans. He improved to 4-0-1 in foursomes.

MATCH 3: Jordan Spieth-Patrick Reed (U.S.) def. Emiliano Grillo-Si Woo Kim (INT), 5 and 4: One of the most successful partnerships of the past few years (6-1-2), Spieth and Reed continued to roll, this time wiping out the all-rookie International team of Grillo and Kim. Spieth and Reed ripped off four straight wins on Nos. 4-7 (needing to play that stretch in only 1 under) and cruised to another team victory, never leading by fewer than two holes. Spieth is now the only player in Presidents Cup history with a 4-0 or better record in foursomes.

MATCH 4: Louis Oosthuizen-Branden Grace (INT) def. Brooks Koepka-Daniel Berger (U.S.), 3 and 1: The South African duo of Oosthuizen and Grace put the first point on the board for the Internationals. They picked up where they left off in South Korea, taking out the former Florida State teammates with wins on Nos. 13 and 15. Oosthuizen and Grace, now 5-0 together, trailed for only two holes Thursday.

MATCH 5: Phil Mickelson-Kevin Kisner (U.S.) vs. Jason Day-Marc Leishman (INT), halved: Playing in his 23rd consecutive team event, Mickelson was in charge of guiding rookie Kisner around Liberty National. The Americans squandered a 3-up lead on the front nine, but they battled back late, winning the 17th hole and then looking at a 6-footer to steal a full point over the Australians. Mickelson, however, missed the par putt, and each side received a half point. 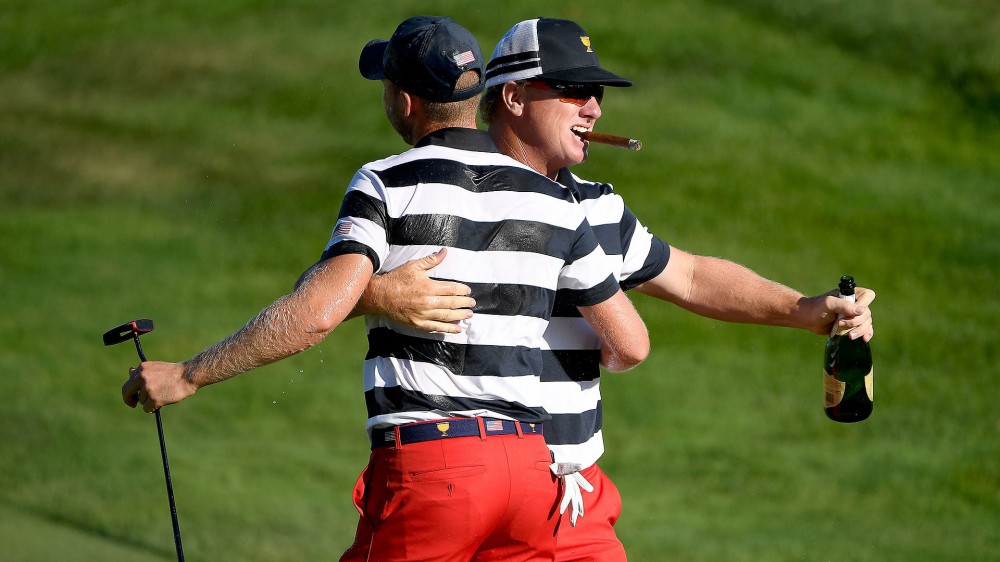