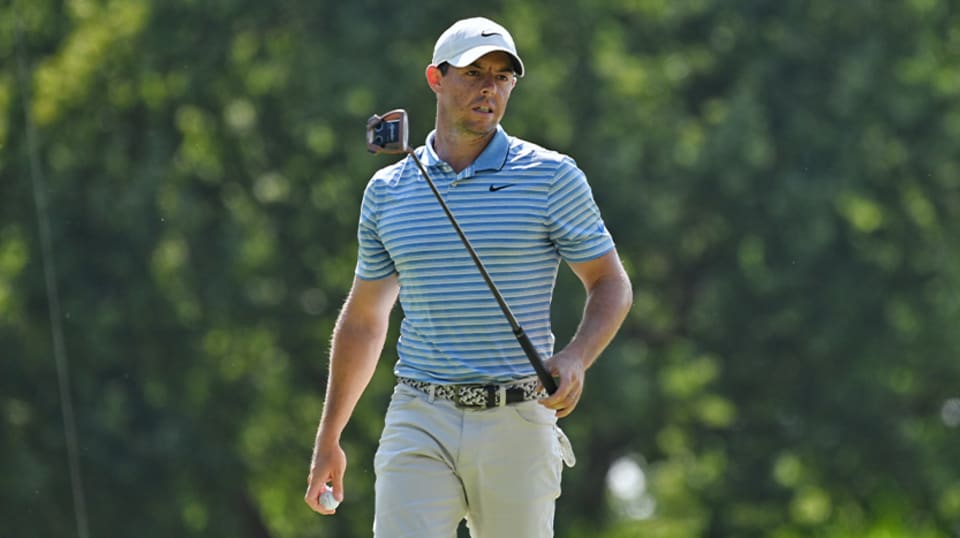 OLYMPIA FIELDS, Ill. – Rory McIlroy doesn’t need fans to keep his head in the game at the BMW Championship. Olympia Fields is so tough it won’t allow anything but his full attention on every shot.

McIlroy and Patrick Cantlay made their share of mistakes Friday and shrugged them off because that’s bound to happen on the toughest test the PGA TOUR has seen this year.

By the end of another steamy afternoon south of Chicago, they were the sole survivors to par.

One week after McIlroy admitted to going through the motions without spectators around to provide the cheers, he had a 1-under 69 to share the 36-hole lead with Cantlay.

It was plenty tough for Tiger Woods, whose PGA TOUR season appears to be two rounds from being over.

He didn’t have enough good shots to atone for his bad ones, and he had to make a 35-foot par putt on his final hole to shoot 75, leaving him nine shots behind. Woods was toward the bottom of the pack at a tournament where he needs to finish around fourth to be among the top 30 who advance to the TOUR Championship.

Cantlay holed a 50-foot chip for birdie, and holed out a 50-yard wedge for eagle. He also missed the green on three of the par 3s, the last one leading to a double bogey. He finished with a 6-iron out of the thick rough and made a 40-foot birdie putt on the 18th hole. It added to a 68, matching the best score of the round.

They were at 1-under 139, one shot ahead of Hideki Matsuyama and Dustin Johnson, who were going in opposite directions when it was time to sign their scorecards. Matsuyama, the only player to reach 4 under at any point this week, dropped four shots over his last 10 holes for a 73. Johnson finished birdie-birdie for 69.

“I think the test is what’s helped me focus and concentrate because if you lose focus out there for one second … just one lapse in concentration can really cost you around here,” McIlroy said. “I think one of the big keys this week is just not making big numbers. If you hit it out of position, get it back in position, make sure that your worse score is bogey and move on. Honestly, bogeys aren’t that bad out here.”

He made a mistake on the 14th hole by going long and left, and only a great wedge to a back pin to 5 feet kept him from a big blunder, even though he missed the par putt. He flirted with trouble later in his round on the fifth hole with a wedge from 134 yards that came up 30 yards short, the pin tucked behind a big bunker. He left that in collar short of the green and got up-and-down for bogey.

Cantlay doesn’t expect to hole out twice a round with wedges and hopes he can sharpen up his game a little. Still, he loves the idea of having to think and plot his way around the course.

For those playing well — anywhere within a few shots of par in this case — it was an enjoyable challenge. For everyone, regardless of the score, it was a grind.

“I don’t know if any rain will matter, really,” Kevin Kisner said after a bogey-bogey finish ruined an otherwise good day and gave him a 70, leaving him three shots behind. “I think even par wins the golf tournament.”

Go back to Shinnecock Hills two years ago in the U.S. Open to find the last time someone won at over par (Brooks Koepka). For non-majors, the tour said over par hasn’t won since Bruce Lietzke at the Byron Nelson Classic in 1981.

“Last week was fun, too,” Johnson said. “But this week is more of a grind, that’s for sure. Every single hole out here is difficult. You’ve got to really be focused on every shot that you hit.”

Among those two shots behind was Louis Oosthuizen, whose birdie in the dark on the final hole last week at the TPC Boston moved him to No. 70 to qualify for the BMW Championship.

“This is the golf course I needed to do what I must do,” he said of moving into the top 30. “Look, this can go really south on you quickly. You can shoot 6, 7 over on this golf course very quickly. But if you really stick to it and play middle of the greens and lag those putts, you can make a lot of pars. And you’re not going to lose spots if you’re making pars.”