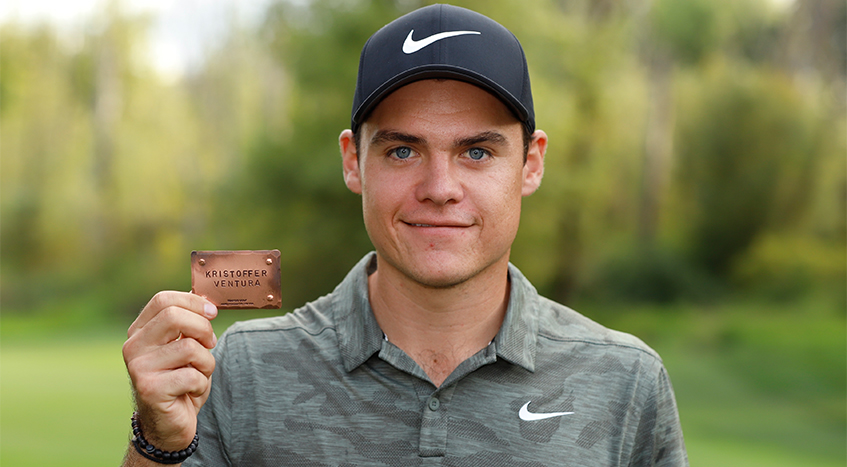 Editor’s Note: This piece was originally published on November 11th, 2019.

Each week during the fall, PGATOUR.COM will highlight one of the rookies playing on the PGA TOUR during the 2019-20 season. This week: Kristoffer Ventura, who’s in this week’s field at the Mayakoba Golf Classic.

TOUR starts/Best finish: 9 (including five this season). Best finish was T18 at the Shriners Hospitals for Children Open this fall. He would go on to notch three other top-25 finishes in his rookie season.

Pro highlights: Began last season with no status on Korn Ferry Tour but got sponsor exemption and finished T3 at BMW Charity Pro-Am presented by SYNNEX Corporation. … Shot a final-round 65 and beat Joshua Creel on third playoff hole at last season’s Utah Championship presented by Zions Bank, his first victory on the Korn Ferry Tour. … After two straight missed cuts, notched second victory at the Pinnacle Bank Championship presented by Chevrolet, giving him two wins in just four weeks and his PGA TOUR card for this season. … Followed Pinnacle Bank win with a solo third at WinCo Foods Portland Open presented by KraftHeinz. … His first top-20 of his career was a T18 this fall at the Shriners Hospitals for Children Open, as he shot four rounds in the 60s to finish at 15 under.

Amateur highlights: Along with fellow newly minted TOUR pros Matthew Wolfe and Viktor Hovland, Ventura was a member of the Oklahoma State team that won the 2018 NCAA national championship. … Played for losing European team in the Junior Ryder Cup at Gleneagles in 2010, when Jordan Spieth and Justin Thomas played for the U.S. squad.

Interesting tidbits: Started playing golf at age 2 when he received a set of plastic clubs for Christmas. … Estimates he won 25 consecutive junior events from age 6-11 in Mexico. … Father is Mexican, mother is Norwegian, and the family moved from Mexico to Norway when he was 12 to help with his golf development. … When he broke through at the Utah Championship, it was only his fifth career start on the Korn Ferry Tour and third of 2019. … Needed appendectomy just days before Q School last fall and wound up missing his Korn Ferry Tour card, necessitating Monday qualifiers. … Speaks three languages fluently (English, Spanish, Norwegian).

Ventura says: “Everything we did in Mexico came out of my parents’ own pockets. They really sacrificed a lot. In Norway, those supporting me took me under their wing and I was able to travel the world and develop. Without that, I wouldn’t have played college golf. I wouldn’t be here.”