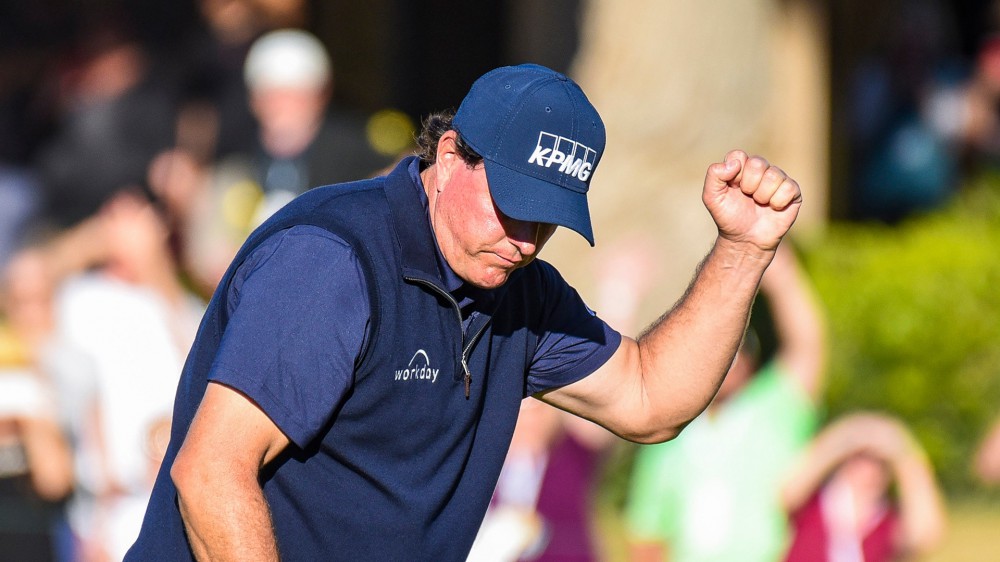 Though the Pete Dye design is the most challenging of the three courses in the Desert Classic rotation, Mickelson felt that if he was going to miss the Stadium’s tight fairways then he’d better have a short-iron or wedge into the greens. So instead of playing it safe off the tee, Mickelson let it fly.

“I feel like I don’t have to be perfect,” Mickelson said. “I can come out, play aggressive, which is how I like to play, try to crush drivers and get it down as close as I can to the greens, and see if I can make some more birdies.”

The bold approach paid off for the 48-year-old. He found just six fairways, but for the third straight day hit 14 greens in regulation en route to six birdies and a bogey-free, 6-under 66 that helped him maintain a two-shot lead.

Mickelson got off to a slow start, making par on each of his first five holes. But he ignited his round with a chip-in birdie at the par-3 sixth hole and proceeded to get hot with the putter. He made five birdie putts from outside 10 feet, including rolling in putts over 30 feet at Nos. 13 and 17, both par 3s.

In all, Mickelson made more than 147 feet of putts.

“I missed a few short putts that I’ve been making historically now for awhile and I let a few slide,” Mickelson said, “but I also made a couple of long ones that were nice little bonuses.”

He also ranked second in driving distance Saturday on the Stadium Course at 335 yards, behind only long-hitting teenager Charlie Reiter. Mickelson expects the driver, though errant at times, to remain a big part of his gameplan for Sunday’s final round.

The last time Mickelson held a 54-hole lead or co-lead on Tour was the 2016 AT&T Pebble Beach Pro-Am, where he finished second. While he is 22 for 36 in his career at closing out 54-hole leads, he has failed to do so in his past three tries.

At 43 career Tour wins, Mickelson can pull to within one of Walter Hagen with a victory Sunday.

“I just love being in contention, having a chance to win, being in the final group, feeling the nerves, feeling that excitement, the opportunity,” Mickelson said. “It’s just, it’s really fun.”

Especially when you come out swinging.