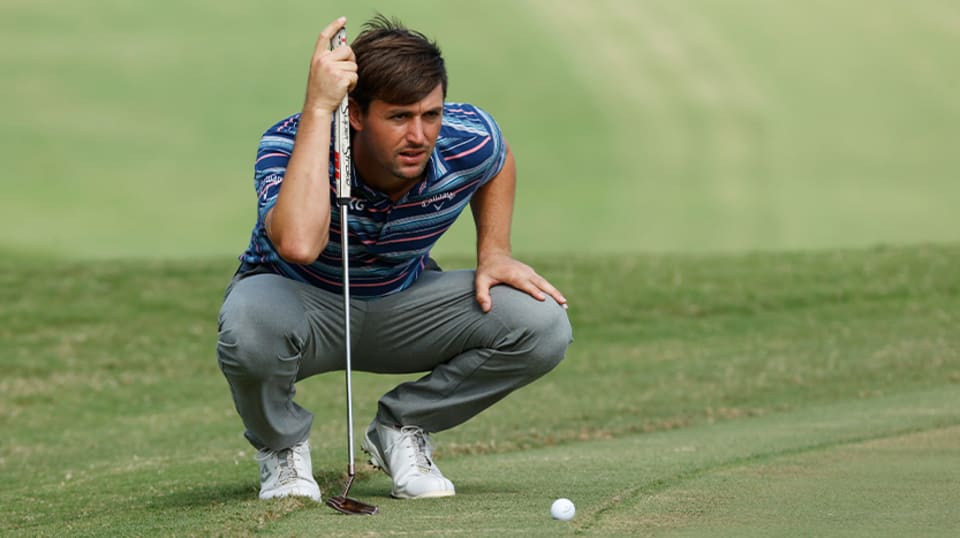 A mentality that matched his career progression.

After maintaining TOUR status in his rookie and sophomore seasons, though, that progression was put on hold.

Schniederjans recorded just one top-25 in the 2018-19 TOUR season, finishing well outside the top-150 on the FedExCup standings and necessitating a return to the Korn Ferry Tour. He felt admittedly lost with his game.

The Georgia Tech alum went back to basics and, as he described, “dug it out of the dirt.” Schniederjans has found consistency in the first part of the 2020-21 Korn Ferry Tour combined season – eight top-25s in 17 starts – and after receiving a sponsor’s exemption into this week’s Bermuda Championship, he arrived at Port Royal with belief that he could indeed contend.

The 27-year-old was a factor throughout the week at the seaside venue, carding a four-round total of 13-under, just two back of the Brian Gay-Wyndham Clark playoff.

With a solo third-place finish in Bermuda, Schniederjans earns another TOUR start (either this week’s Vivint Houston Open or, if the field is full, The RSM Classic later this month).

More than that, he validates belief in a revamped game. It matches his career-best TOUR finish, a clear indication that he can compete to win at the highest level.

“This was a good confirmation that I’m doing a lot of good stuff,” said Schniederjans after signing for a final-round, 5-under 66 at Port Royal GC. “I remember coming here last year, and my game was nowhere near organized like it is now, and I missed the cut. To come out here and almost win, it’s a cool finish.

I took my offseason, before 2020 even started, to really get better, and tried to get some help, and just was able to put a lot together this year and figure out my little formula. When I get off, I can get back on track real quick, even mid-round. I was lost for a couple years; I didn’t know what I was doing with my swing, and really struggling tee-to-green. I’ve been able to manage it real nice this year, and … I kind of understand my stuff even better.”

After three full seasons on TOUR, it could have been easy for Schniederjans to feel dejected about the prospect of returning to the Korn Ferry Tour, particularly considering the high expectations placed upon him through the years.

Rather, the Atlanta-area resident viewed it as a perfect opportunity to revamp his competitive process, away from inherent TOUR pressures.

He finished T11 at the 2020 Korn Ferry Tour season-opening event, The Bahamas Great Exuma Classic at Sandals Emerald Bay. It marked his best finish in 17 months, and he didn’t look back.

“It’s a high responsibility playing out here (on TOUR),” Schniederjans said. “You’re playing for a lot of money; it feels very important. I think it was really good for me to take a step back to the Korn Ferry Tour and use the time to just really take my time, evaluate my game and hit the reset button.

“Kind of used it to my advantage, I would say. You don’t want to do that when you’re on the PGA TOUR; you don’t want to take your time. You want to be ready to go right away. I think I was able to look at it as, ‘Alright, I’ve got 12 or 15 months to get myself ready so that when I come back, I’m actually ready to do something out here.’”

Contention throughout the week in Bermuda, and a third-place finish?

Turns out, Schniederjans was more than ready.