Backstopping has been a topic of debate in the golf world, particularly on the men’s side.

Friday at the Honda LPGA Thailand, the women jumped into the controversial fray.

On the par-5 18th hole, Ariya Jutanugarn pitched to within a foot of the hole. She then looked to playing competitor Amy Olson to see if she was OK to go tap in her putt.

Jutanugarn stopped, appearing to be waved off. Olson then took a practice swing, set up for her third shot and hit a low runner towards the hole. The ball was ready to run past the pin, but collided with Jutanugarn’s and stopped inside of 2 feet.

After Olson and Jutanugarn gave each other fist bumps, Jutanugarn was able to replace her ball where it originally came to rest. Both players made birdie.

Whether it was collusion or just Olson trying to quickly finish her round and laughing at the improbability, or good fortune, of her hitting Jutanugarn’s ball, the incident stirred up Golf Twitter.

Even worse with the full video pic.twitter.com/lpras0mF4L

According to Rule 15.3a/1, purposeful backstopping could result in a two-stroke penalty or disqualification. Neither player, however, received a penalty.

15.3a/1 – Breach of Rule for Leaving Helping Ball in Place Does Not Require Knowledge

In stroke play, under Rule 15.3a, if two or more players agree to leave a ball in place on the putting green to help any player, and the stroke is made with the helping ball left in place, each player who made the agreement gets two penalty strokes. A breach of Rule 15.3a does not depend on whether the players know that such an agreement is not allowed.

The same outcome would apply if the player whose ball was near the hole offered to leave the ball in play to help the other player, and the other player accepted the offer and then played.

If the players know that they are not allowed to make such an agreement, but still do it, they are both disqualified under Rule 1.3b(1) for deliberately ignoring Rule 15.3a.

Olson stands at 9 under par through two rounds, two off the lead. Jutanugarn is at 4 under par. 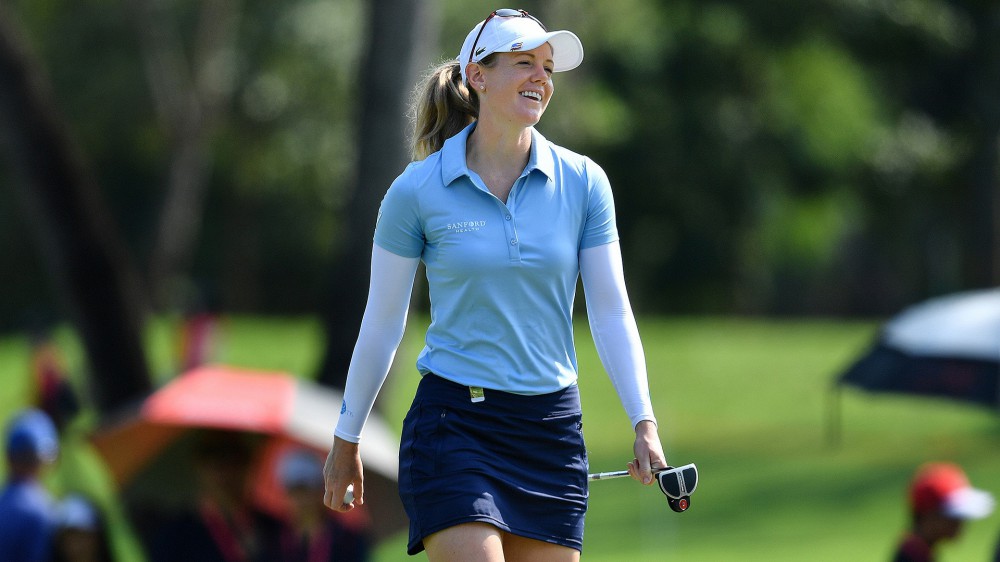