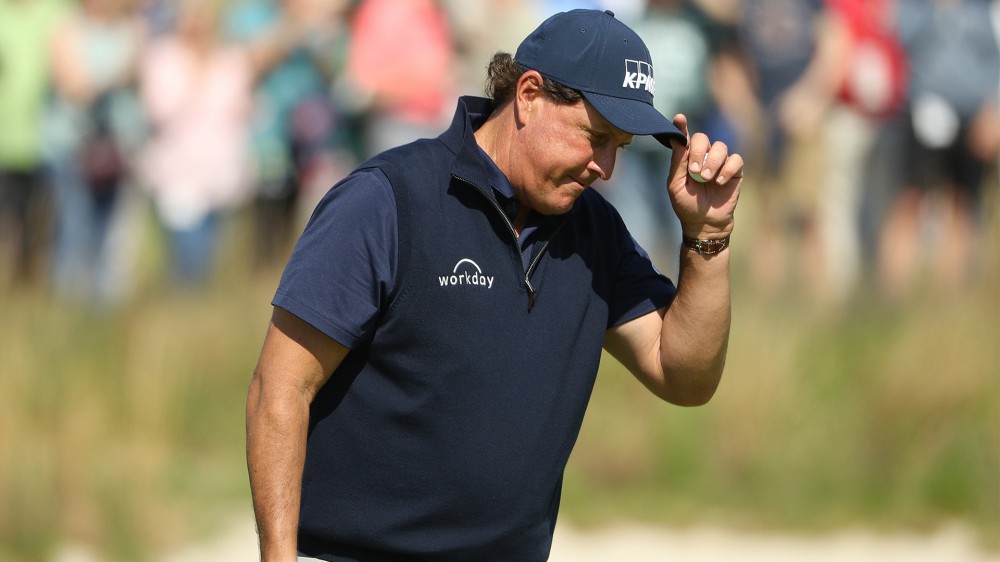 FARMINGDALE, N.Y. – With his chances for a second PGA Championship title dashed, Phil Mickelson is already turning his attention to next month’s U.S. Open.

Mickelson was a runner-up at Bethpage in both the 2002 and 2009 U.S. Opens, but he has struggled to get much going this week on the Black Course. While rounds of 69-71 left Mickelson at even par through 36 holes, he stumbled to a third-round 76 that included nine bogeys.

It means that Mickelson’s next chance for a sixth major title will come at Pebble Beach, as he looks to round out the elusive final leg of the career Grand Slam. His record includes six runner-up finishes in the event, most recently in 2013, and Mickelson finished T-4 in 2010 when the tournament was last held at Pebble.

Mickelson will turn 49 on the day of the final round next month, and the historical significance of a potential victory isn’t lost on him.

“There’s not much I could do right now that would do anything to redefine my career, but there’s one thing I could do, and that would be to win a U.S. Open,” Mickelson said. “So if I were to do that, it would change the way I view my career because there are only, what, five guys that have ever won all the majors. And you have to look at those guys differently.”

The five to complete the career Grand Slam include Gene Sarazen, Ben Hogan, Gary Player, Jack Nicklaus and most recently Tiger Woods. Jordan Spieth, who started the third round at Bethpage in a tie for second, would join the exclusive group with a PGA title.

Mickelson already has a win this year at Pebble Beach, capturing the AT&T Pebble Beach Pro-Am for his 44th career win. While the course will play far differently in USGA hands in June than it did under PGA Tour discretion in February, he still believes the style of play required will give him a better chance than some other future tournament venues.

“We’re on a golf course at Pebble where you really don’t need to hit a lot of drivers, and you need to putt poa annua greens very well with a lot of break, which is something I’ve done well,” Mickelson said. “It lessens my weakness, which is hitting fairways. It makes that not quite as important because you don’t have to hit drivers there.”