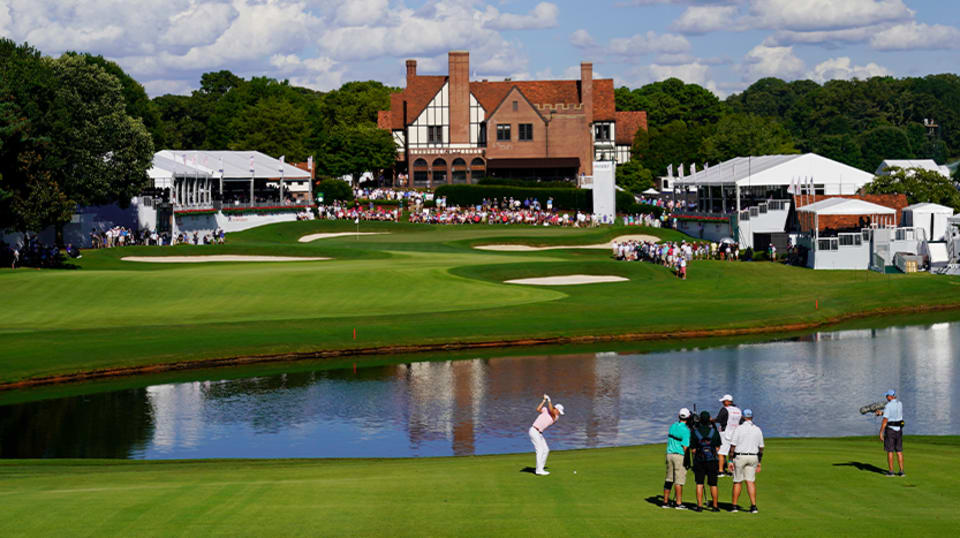 Imagine taking on Justin Thomas down the stretch at East Lake for the FedExCup. What about trying to outduel Tony Finau as you hit the stadium hole at TPC Scottsdale with thousands of fans screaming for action.

Ever wanted a round at Riviera Country Club with Bryson DeChambeau or a veteran like Ian Poulter or Jim Furyk? Or maybe you fancy yourself the next Alister Mackenzie, Pete Dye or Ben Crenshaw of course design?

All of these scenarios and more come to life in the new PGA TOUR 2K21 video game set to launch on August 21 on PlayStation 4, Xbox One, Xbox One X, PC, Nintendo Switch and Stadia.

Game developers HB Studios have put together a serious upgrade on the previous iteration, known as The Golf Club 2019, teaming with 2K and the PGA TOUR to bring to market a game that screams to both the arcade-style casual player and the hardcore golf superfan.

“Our goal is to make the PGA TOUR 2K21 in-game, licensed, real-life course recreations as detailed as possible, so it feels like you’re actually playing the course alongside top PGA TOUR pros,” HB Studios senior producer Shaun West said. “To see professionals play these courses on TV, and then watch each come to life as playable courses within the game is an incredibly cool process to see, and we’re excited for our fans to be able to experience it as well.”

You’ll take them all on in career mode, starting as a rookie on the Korn Ferry Tour who needs to find his way to promotion. The you will try your luck against a stable of PGA TOUR stars led by former FedExCup champion and world no.1 Thomas in a 30 event season.

DeChambeau is going to rip it long, even though his avatar doesn’t have the bulk the six-time TOUR winner has put on lately. His body scans were done before his power lifting and weight training efforts – but that’s not to say he won’t be adjusted in the future.

“It’s a good thing we have contacts on the WWE side, maybe we can borrow some of their body types as he has gotten considerably thicker,” Josh Muise, creative director at HB Studios joked. “When we scanned Bryson he was a very different size then he is now and full credit to Bryson for putting in all the extra hard work during the lull of the season. It’s a unique one that landed on our plates and we will do our absolute best to play catch up if we need to.”

If it’s bulk you like you can use it when you build your own player in great detail, combing through apparel from licensed sponsors to find your perfect look. You can also customize your clubs but all options bring balance in some way. Max out in one space, you’ll lose out elsewhere. So consider who you really want to be.

Will you be a power hitter who gives up accuracy but is constantly hitting bombs or will you put a premium on fairways and be one of the sports premier ball-strikers who isn’t fazed by being out-muscled off the tee? Perhaps your bread and butter will be on and around the greens.

Professional commentator Luke Elvy and former PGA Championship winner Rich Beem will call the action throughout your career and the six difficulty settings mean you can take things easy and just swing away or test yourself down to the nitty gritty parts of golf. Shape the ball, deal with loft and angles, react to the lie, create specific spin and work on taking a little off or adding a little more with partial shots.

The course design option is second to none. You’ll have all the tools the developers did at your disposal to build your dream course and once completed they can be uploaded to be played by all players across all platforms.

It is user-generated courses from this feature that supplement the TOUR courses throughout the game. Developers picked their favorites from the last version of the game and added them to the stable. Of course as users get busy with all new assets things are going to get even better in PGA TOUR 2K21.

Want 18 island greens? Go for it. Crocodile infested lakes? Sure. Snow on one hole, sun the next… why not. Want to try to replicate your local course? Have a crack at it. Others might have already done the hard work for you… and let’s just say there are some major recreation efforts in there.

You can start your own or join an online society and play competitively against others from across the globe. Want to find the best player in your extended family… set up your own schedule and get going.

Of course you can still take on your friends in all sorts or one off modes as well. Stroke play, match play, stableford, skins, alternate shot and now four player Scramble… set it up, grip it, and rip it.