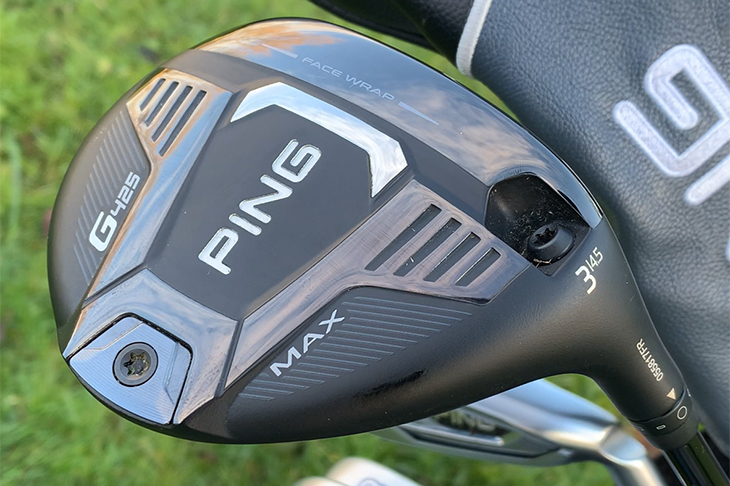 Ping G425 Fairway Wood Review-If you have a keen eye for new golf equipment then you might have spotted that plenty of Tour players have had the new Ping G425 driver in the bag over the last couple of months.

However, the likes of Viktor Hovland and Patrick Reed still had the TaylorMade SIM Fairway in the bag at the European Tour’s end of season DP World Tour Championship.

Which begs the question, were they waiting until the end of the season to change or is the Ping fairway wood once again not quite as hot as the TaylorMade?

When I played Ping on Tour I always struggled to find that perfect 3 wood which worked for me both off the tee and from the fairway. In the end I picked the one that was best for fairway as I hardly needed 3 wood from the tee due to my length issues – I nearly always needed the driver!

If there was a club that I considered changing from Ping it was the fairways, as like Viktor and Patrick I just didn’t find them long enough.

However, Ping say they are now offering ‘super-charged distance’ without sacrificing consistency and a better range of models and options for everyone. Could this be just what I’ve been waiting for?

The Face Wrap technology consists of a single piece of maraging steel which cups around the whole face of the clubhead, providing greater stability than just a face insert as well as producing greater flex across the face and in to the crown and sole too.

The entire face is able to flex at impact, and this helps to generate 1.5mph extra ball speed for golfers so that they should see a distance increase of a couple of yards, and gain more consistency in distance across the face.

Spinsistency looks at optimising the shape of the face to provide better results. Typically the face shape is a circle, but Ping have changed this to an ovoid (egg) shape from the crown down to the sole.

This helps to influence the launch angle and spin rates of your shots when they are struck from the top and bottom of the face, meaning that your results are much more consistent across the face to give you more distance regardless of strike with added forgiveness.

The Trajectory 2.0 allows for eight different settings to be found dependent on desired loft and lie for ultimate fine-tuning, with loft being changeable by up to 1.5 degrees higher or lower. There is also the option to change the lie angle up to 3 degrees flatter as well, which can be ideal for shorter golfers who want to match their fairways up with the rest of their club setup.

The G425 sees Arccos GPS tags added to the grips to track shot data on the course. This has been a feature in Cobra equipment and now in Ping also, and it’s a great way of getting feedback on your performance at the end of each round.

There are three models available in the G425 fairway metal range:

– G425 LST Fairway – Aimed at the player wanting lower spin, claims to have 200rpm less spin than a G410 LST and 450rpm less spin on shots hit from the bottom of the face. This should result in longer and more consistent shots, with a more penetrating ball flight. Available in 14.5 degrees.

– G425 SFT Fairway – SFT (Straight Flight Technology) models are aimed at the slicer of the golf ball and is claimed to be 6 yards more left biased (if you are a right hander) than the G410 SFT, helping to get rid of that dreaded card-wrecker. Available in 16, 19 and 22 degrees.

I visited Ping in October to trial out shafts and lengths of shaft. Ping also have all of my fitting data on record since I was 15 years old so they take custom fitting to new levels with me. For testing I was sent the Ping G425 Max Fairway in 14.5 degrees and a Mitsubishi Tensei CK Orange 70 Shaft.

I compared the G425 against the Titleist TSi2, my favourite fairway of 2020, inside at LSH Auto, Mercedes Benz Stockport using Trackman 4 and Titleist Pro V1x balls. I then visited Prestbury Golf Club to see how it performed on-course both off the deck and on a tee.

Just like the driver, the look of the fairway wood is exactly what I’d want. It has a simple matte black finish with a traditional, compact head shape.

The face is noticeably shallow and Ping has done away with the turbulators on the crown – they say that they were only ever for alignment on the woods and hybrids and don’t have the same aerodynamic effect as on the driver.

There are 3 dots placed across the top of the crown near the face which aid alignment, whilst the colour has been changed from a silver/grey in the G410 to a black/slate in the G425 and screams sophistication and premium quality.

In true Ping fashion, the fairway woods sound loud and high pitched which may not suit everyone, but at least it gives you some extra feedback on your strike.

The G425 is as consistent and stable as ever for a Ping fairway, and you should never underestimate how solid the brand’s clubs are through the hitting zone. I did for many years as I didn’t know any different but when testing the woods against others with Golfalot, I could see that all of the other manufacturers are striving for this level of stability and forgiveness. Ping are once again setting the standard for stability in their metalwoods in 2021.

With a 13 yard difference in yardage between my best and worst shots, and a very tight dispersion, this is incredibly accurate for a 14.5 degree fairway wood.

Ping promised ‘Spinsistency’ and I have to say that it appeared pretty consistent from my testing, which was also reflected in the carry distances too with almost every shot hit with the G425 falling within around 6 or 7 yards of each other, besides one ‘hot’ shot which jumped out to close to 190 yards.

When comparing it against the TSi2, I found that the G425 was certainly more forgiving however it was not quite as powerful, with the Titleist producing around 2mph extra ball speed and 2mph of clubhead speed which is something worth noting if it’s out and out ball speed you’re looking for.

I found the G425 Fairway a really easy club to hit, and despite the fact that I was swinging easy as I had four layers on (that’s a Manchester winter for you) the ball still felt like it sprung off the face with little shape to it.

I hit a range of different shots from different situations – off a tee, from the fairways and rough, and even off a couple of tough downslopes, but I actually found it was relatively easy to strike and the performance was really consistent.

Typically the 3 wood is the hardest club in the bag for me to hit but the Ping G425 really did help with that.

Because driver is typically a strength for me, and I am not a long hitter, I rarely hit fairway woods from the tee so I was interested to see how it performed. I have to say I was very impressed, splitting the fairway from the first tee and hitting two nice draws on the 2nd and 3rd.

I also managed to find the green with my fairway approach to the 1st green, along with a nice cut into a tight pin on the 3rd. I could go on, but I don’t want to bore you, although I will say that it was a massive confidence boost to see these results particularly during wet winter golf, and gave me a more positive feeling than during my indoor testing.

I found that this club was ideal for adding a little more forgiveness in tough conditions and also seemed to help me out when I was swinging within myself.

Just like with the driver, there are no extra tricks with the G425 Fairway. It’s just a simple, smart looking wood which I think will suit a wide range of golfers.

Will it find its way into the bags of non-contracted players on Tour? I’m still not sure, as I think Ping still has a little more work to do before they can meet the distance and easy launch of the Titleist and TaylorMade counterparts.

However golfers should not allow trends on Tour to dictate their own equipment and so the forgiveness should be one of the first things to consider for most people when picking a fairway. Elite golfers don’t have to worry so much about off-centre strikes as they happen far less often than with amateurs.

What is great is that all three of the G425 heads look similar so it is hard to tell which head you are using, which I think is a bonus as it will stop people from discounting clubs such as the SFT because of the typical complaints of the ‘oversized head’ or ‘too much offset’.

What I do like about Ping is how they openly state how many more yards you will get and how much straighter you will hit the ball. You don’t see this from other brands and I think it proves the brand’s confidence in their product rather than just using it purely as a marketing ploy.

The new face shape is something that does make sense to me and it works too. I think it could be a really valuable addition to fairways woods, especially considering it’s specifically giving you help on strikes that are low on the face from the fairway and high off the face from a tee.

I was impressed with the consistency of spin, height and flight throughout my testing – it was like playing on repeat!

If you are a player who struggles with shaping the ball too much and striking the ball consistently, then Ping are still the most reliable option in my opinion. Remember, the more you hit the short grass the longer the ball goes, so don’t always get seduced by chasing more distance over forgiveness and accuracy.

And if you are a slicer of the golf ball and lose yardage due to the extra curvature, then I would suggest that you seriously consider the SFT model as Ping suggest that it may help to calm down your left-to-right flight (for a right hander) by as much as 20 yards compared to the Max model.

Would I Use it?

If it was all about looks then yes, but having tried rival fairways from the likes of Titleist and, particularly, the TaylorMade SIM Max then I wonder if you can still get a little more distance with similar forgiveness levels… I’ll leave the decision up to you.