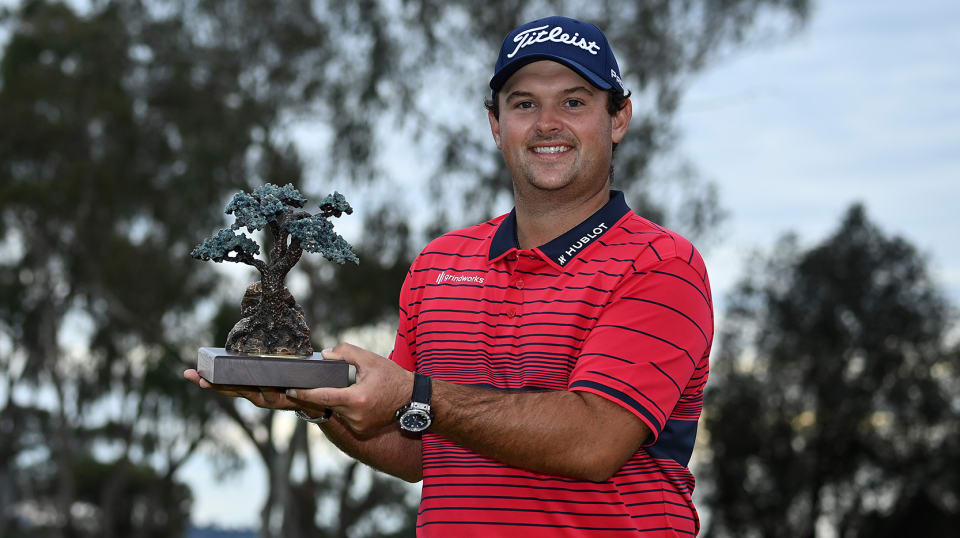 SAN DIEGO – Patrick Reed is at his best when he is under pressure. He almost craves it. So perhaps it was a foregone conclusion that he would march to a dominant win at the Farmers Insurance Open.

Reed’s final-round 4-under 68 helped him finish at 14 under at Torrey Pines – enough to secure a five-shot win over Viktor Hovland, Xander Schauffele, Tony Finau, Ryan Palmer and Henrik Norlander. The now nine-time PGA TOUR winner broke free of a log jam of contenders with an early eagle and then doggedly shook off a challenge from Hovland late in the day.

The margin was ultimately large, but it wasn’t all that easy. Reed needed to produce some stellar short-game play to stay in control. When things got shaky on the notoriously difficult South Course, Reed had one cliché in the back of his mind: When the going gets tough, the tough get going. Each missed shot just fueled his fire and gave him a chance to showcase a trait he values in his game. Resilience.

“You look at all the great players throughout times, all of them are really resilient. It doesn’t really matter what’s going on around them, what’s going on on the golf course, whether they’re getting good breaks or bad breaks, they seem to really figure out a way to get the job done, to really just drive in and to keep on improving each shot each day,” Reed said.

“That’s golf, that’s what you’re supposed to do. That’s why I love the game. It throws punches at you; you throw punches at it. And at the end of the day hopefully you’re the one standing.

“Golf’s hard as it is, and you come to a place like this where it’s so demanding. Not just off the tees. It doesn’t matter if it’s a drive, an iron shot, a wedge shot, putt, you have to be all locked in 24/7.”

On Sunday, things started in neutral for Reed with five straight pars before a brilliant eagle putt on the par-5 sixth. The Texan connected from outside 45 feet a day after doing similar from 40 feet. He would make the turn at 13 under with only Hovland (one back), Jon Rahm (three back) and Carlos Ortiz (three back) legitimate threats to his ambitions.

Ortiz was gone quickly with bogey at the 11th and double bogey at 12. Hovland suffered a slow bleed as Reed became a short-game wizard under pressure. The Norwegian missed a short birdie putt on the par-5 13th to join the lead and then made back-to-back bogeys.

On the 14th hole, Hovland went from a fairway bunker into a canyon forcing a penalty drop, and then on No. 15 he drove the ball directly behind the base of a large tree, forcing a simple pitch out.

Despite being three back with two to play, the two-time TOUR winner felt he could force the issue with a finishing flourish and his birdie putt on the 17th from 32 feet went within a whisker of going in. Sadly, perhaps still disappointed it didn’t drop, he missed the 2-foot par attempt.

Meanwhile, Reed could easily have been leaking shots just as fast as the other contenders. But staying true to his mantra, he knuckled down. He got up and down for par from the rough on No. 10, and from greenside bunkers on Nos. 12 and 14.

Then, with Hovland sticking his tee shot on the 16th hole ahead of him inside 20 feet, Reed was brilliant in securing another par from 50 yards on the 15th after a forced punch-out from a wayward tee shot. He just refused to open the door for others.

Reed was also able to move past a ruling from the third round. The 30-year-old had acted in a “textbook” manner when taking relief from a ball deemed to be embedded on the par-4 10th hole.

Reed’s victory on Sunday was the result of some changes. It was after the last U.S. Open – played in September due to the COVID-19 pandemic – that Reed switched to David Leadbetter for a swing coach. He was pleased that – for the most part – the new swing held up under pressure.

“The hard work that my team is going through and working with me on trying to dial it in, get it where it is right now is amazing,” Reed said of his new swing.  “The good thing is, Led’s always told me… you’re working towards something, there’s no reason why you can’t go ahead and win. Because of that I had that kind of attitude going into today that, hey, even though the swing’s not 100%, you know how to get it around this golf course, you can go out and shoot a number and put up a fight.

“This one was pretty special. To be tied for the lead going into today and in that final group and seeing the swing kind of hold up throughout the round and allowing my short game to kind of save me there towards the end meant a lot, meant that I’m on the right path.”