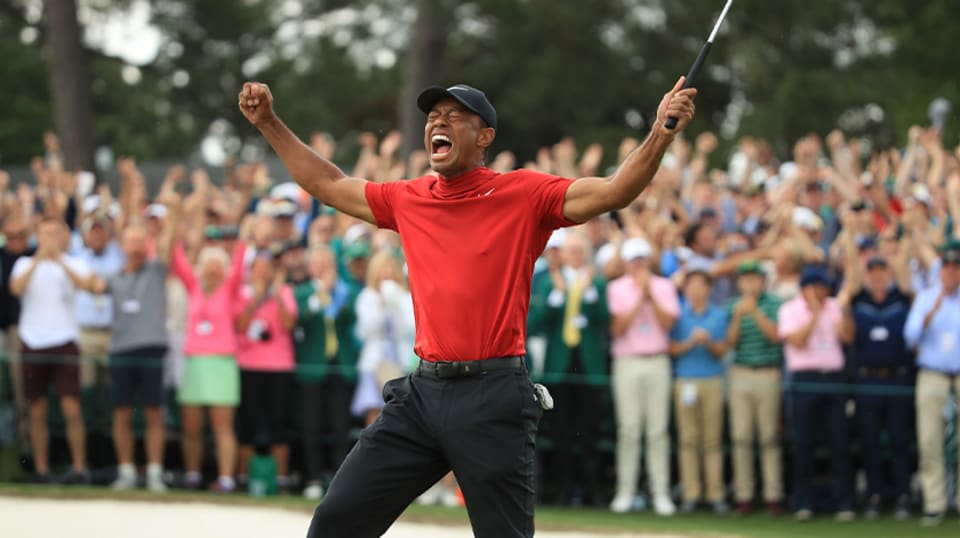 Molinari wasn’t the only contender to find Raes Creek on the infamous 12th. While the expected big storms hadn’t arrived, there was a small squall right at this critical juncture. Winds whipped up to around 20 mph, making a swirling mess of uncertainty on Amen Corner.

“Amen Corner, where we have no earthly idea what’s going to happen,” were the prophetic words of announcer Frank Nobilo just moments before. Little did he know how right he was. Not since Jordan Spieth’s meltdown in 2016 at the same hole had we seen something this dramatic.

In the group ahead, Brooks Koepka took a swipe with his 9-iron, only to see it drift right, find the bank and roll back into the water. He was just two back before the swing. Ian Poulter then stepped up and followed his playing partner. His 8-iron didn’t have the legs to stay dry. Both made double bogey.

Molinari was aware of the carnage yet somehow made the same mistake.

“That was just so weak. Just that ball didn’t even look like it was flying,” Faldo would say of the Italian’s shot.

“That door is flown open now, not just for Woods. … For everybody,” Nobilo added.

Woods played it safely into the middle of the green while Finau followed by incredibly also finding the water. Four water balls. Four double bogeys. Yet only Poulter would be without the chance to contend over the last six holes. It was the first time Woods found himself part of the lead when he converted a two-putt par.

4. There were 10 players who either had a piece of the lead or were within one of the lead at some point on Sunday.

The drama on the 12th helped open up the chance of victory to a raft of hopefuls. Prior to it, Molinari had led outright throughout Sunday.

Jon Rahm birdied the par-3 16th to pull within one of the lead at 10 under, but he failed to get any deeper.

Bubba Watson, chasing a third Masters title, went birdie-birdie-eagle on 13-15 to also hit 10 under and be one back. But bogeys on 17 and 18 sent him packing.

Rickie Fowler birdied the 13th, 14th and 15th holes and lipped out another close chance on the 16th. When he birdied the 17th he was just one back at 11 under, knowing he likely needed at least one more birdie to have a chance. Instead, he dropped a shot on the last.

Jason Day, who was a 36-hole co-leader, but was the only contender to shoot over par in the third round, tried to fight back. He missed a short birdie chance on the 16th but birdied the last to take the clubhouse lead at 11 under, one off the lead at the time.

Patrick Cantlay made the cut on the number at two over. He shot 64 on Saturday and then went lights out on Sunday again. As the carnage happened back on 12, Cantlay eagled the 15th hole and catapulted to the lead at 12 under. As he walked to the par-3 16th, he saw his position on the leaderboard. It seemingly spooked the former amateur standout. Much like Day had done in 2013 when leading on the same tee, Cantlay nervously bogeyed the 16th and 17th to drop back out of the running.

Dustin Johnson rarely goes unnoticed but he had on this Sunday. After four holes, he was six back so it wasn’t until he birdied the 16th hole that he was featured on the coverage. That moved him within one. Birdie on the 17th saw him join the lead at 12 under. Facing a mid-range birdie putt up the hill on 18, Johnson left it short. He didn’t know at the time but had he made the putt he would have posted 13 under, the same final score for Woods.

Xander Schauffele had birdies on 13 and 14 to reach 12 under and the lead. He stayed there when he was unable to birdie 15 or 16. By the time he made par on 17 he’d dropped from the top to two back as Woods surged. On 18, he drove it into a bunker from which he produced a fat approach shot and ultimately a T2 finish.

Brooks Koepka, who had won two of the previous three majors, was within one on the front nine after a birdie on the eighth hole but seemed to end his chances with his water-ball double on the 12th. Instead, he bounced back immediately with an eagle on 13 to be one back, and his birdie on 15 saw him join the lead. While Woods fired his shots and earned roars behind him, Koepka pressed ahead. He had a 12-foot birdie look on 17 that stayed high and after a huge drive down 18 he hit his approach to 6 feet. Incredibly, having been beyond clutch in major moments to that point, Koepka pulled the putt left and had to settle for par and T2.

Woods first got within one of the lead with a birdie on the third hole but followed that with two bogeys. He pulled within one again at the seventh before finally getting a piece of the lead at the 12th. Birdie on 13 kept him up top but another on 15 gave him the top spot alone. His next swing turned out to be the clincher though. Which brings us to our final point…