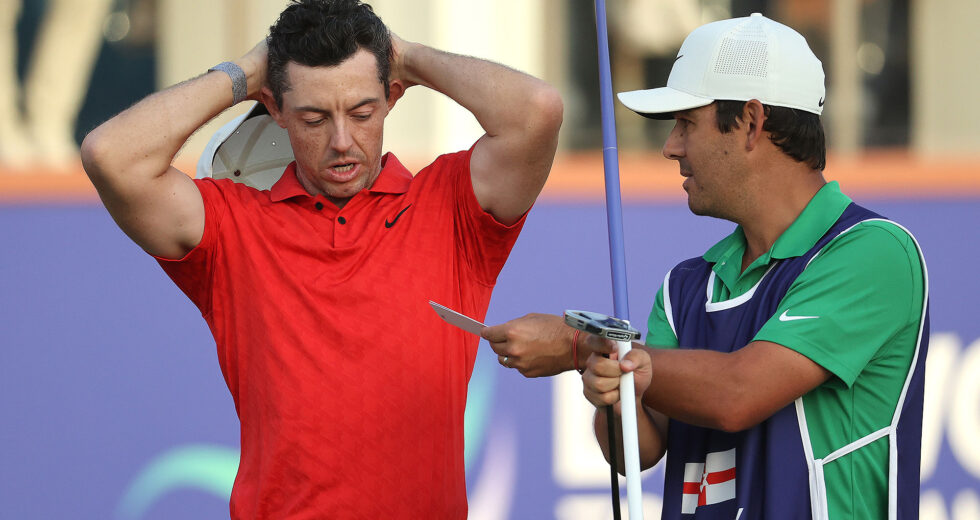 Rory McIlroy lost the lead at the DP World Tour Championship in Round 2, when he hit his third shot into the water at the par-5 18th and made double bogey.

He ran into some more trouble late on Saturday, but managed to recover and take a one-shot advantage into the final round in Dubai.

Battling with Sam Horsfield for the top spot, McIlroy’s tee shot at the par-3 17th precariously stayed on the rocks and just out of the water hazard. After some deliberation with his caddie, Harry Diamond, McIlroy played his shot from the ball’s resting spot.

“Yeah, Harry was pleading with me not to hit it – ‘Just go back and we can make four at the last,'” McIlroy said after his round. “It was reminiscent … I missed the second hole in Boston right a couple years ago when I was playing with Tiger, and I was trying to hit it out of the hazard, similar sort of thing and went straight into the water. Harry and I were both thinking of that when we were looking at it.”

The shot McIlroy was referencing occurred during the third round of the 2020 Northern Trust, when he was playing alongside Tiger Woods.

McIlroy made triple bogey last year at TPC Boston. His risk was rewarded with a bogey on Saturday. To atone for Round 2, McIlroy made birdie on the 18th – while Horsfield made bogey in the group behind – and McIlroy grabbed the outright lead entering the final round at Jumeirah Golf Estates.