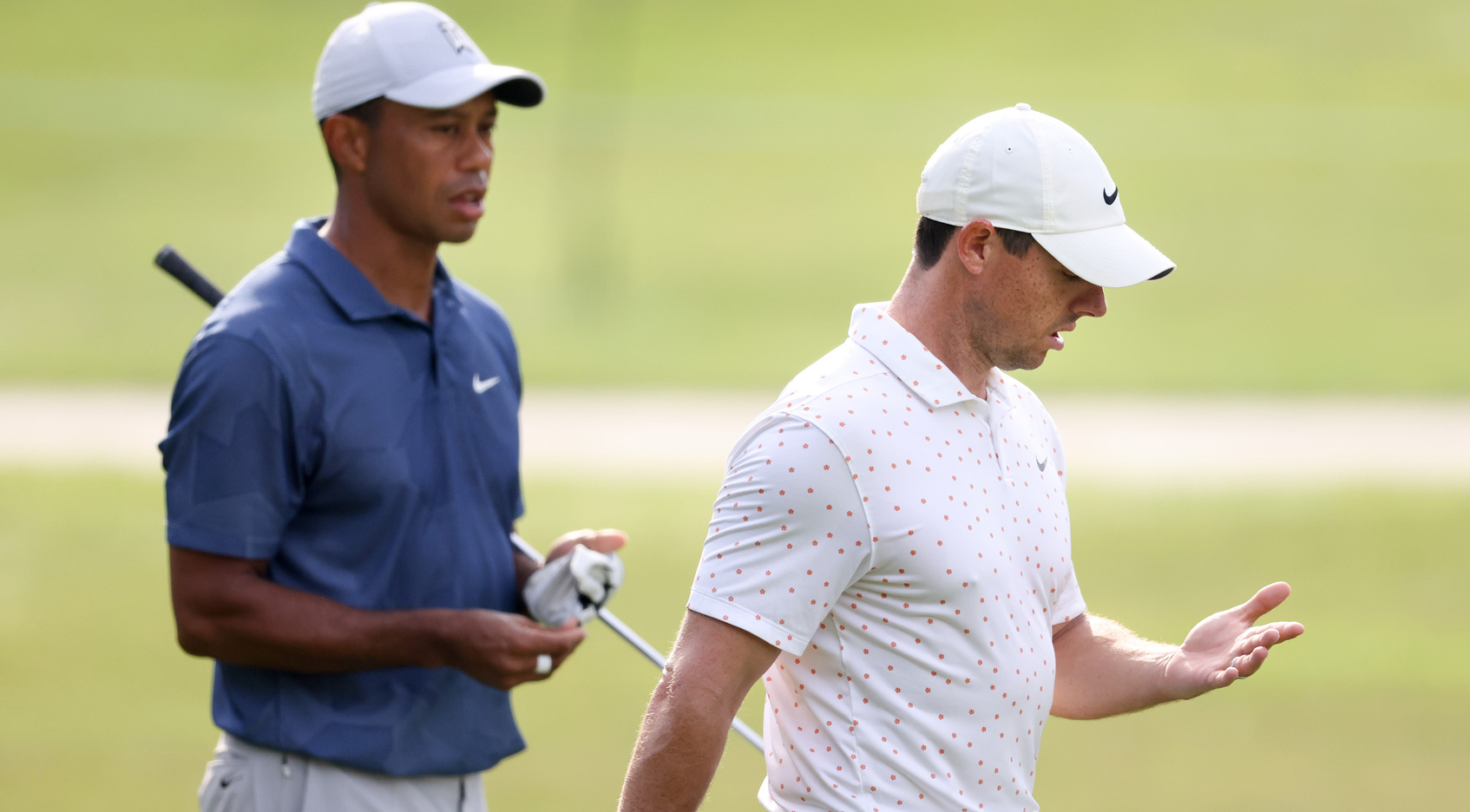 For Woods, who shot 2-over 73, his usually stellar iron game was not there, because in hitting 12 of 14 fairways, he only managed to find 11 greens in regulation.

For McIlroy, who shot 74, his on-course focus continues to be his Achilles. Consider the 3-8-2 start – translation: birdie, triple-bogey, birdie – that pretty much told the story of his day and his stretch of golf since returning from the pandemic-enforced break. Brilliant in so many flashes, McIlroy continues to hurt himself with big numbers.

After burying a 7-foot birdie roll at the first, McIlroy from 222 yards came up short of the green at the par-5 second. Playing out of a marshy hazard, his recovery hit a rock and bounced backward, this time into the water. He compounded matters by three-putting from 40 feet for a triple.

Later, McIlroy was left of the fairway at the par-4 sixth, then from 151 yards he went left of the green and in gnarly native grass. There were two whacks with a wedge to get it out of the native grass, then a third to find the green, from where he two-putted from 12 feet.

Two triples in six holes is hardly the start McIlroy envisioned and it meant that the two icons were a combined 5 over, but they proceeded onward with improved golf, even if the scoring touch was not present.

McIlroy, after the choppy sixth, played his final 12 holes in 1 under, birdies at the par-4 10th and par-5 18th against a lone bogey at the par-4 14th at least giving him a positive close to savor.

Woods birdied the par-4 ninth to make the turn in level-par 36, but bogeyed Nos. 11, 12 and 14 before negotiating a deft two-putt birdie from 60 feet, up a steep swale left of the green, then down a slippery slope.

Contrasting, the way in which they achieved their scores, because whereas Woods drove it nicely, McIlroy found his way into just six of 14 fairways. And whereas Woods kept losing his way to the green, McIlroy did manage to hit 13 of them.

There was, however, a common denominator – misery on the greens.

After two positive days in the Strokes Gained: Putting category for Woods, he lost a whopping 3.503 strokes, the lowlight being the par-4 12th when he three-putted from 28 feet.

McIlroy, meanwhile, required 32 putts and was minus 1.941 in the SGP category. He only one-putted twice over his final 13 holes.

The matching birdies, at least, put a pretty bow on a rather blah day, but if you’re keeping score at home, it means that in the 23 times they’ve been paired in a stroke-play tournament, Woods has had the lower score 11 times, McIlroy on nine occasions, and three times they’ve been tied. (The other pairing was the 2019 World Golf Championships-Dell Technologies Match Play, which Woods won.)

It would have been a best-ball 5-under 66, pretty good for the championship flight of the late-summer member-guest. Just not what you’d expect for world championship titans.

Not that you can’t put it all into context; it was, after all, the third round of a tournament that each player knew he didn’t have a chance to win, with it having little effect on their status for next week’s BMW Championship. (Each is going to qualify.) So that made it easier to doff their white caps, exchange smiles, then share a picnic table for lunch and friendly conversation.

You can bet that nothing about their rounds factored into the discussion.