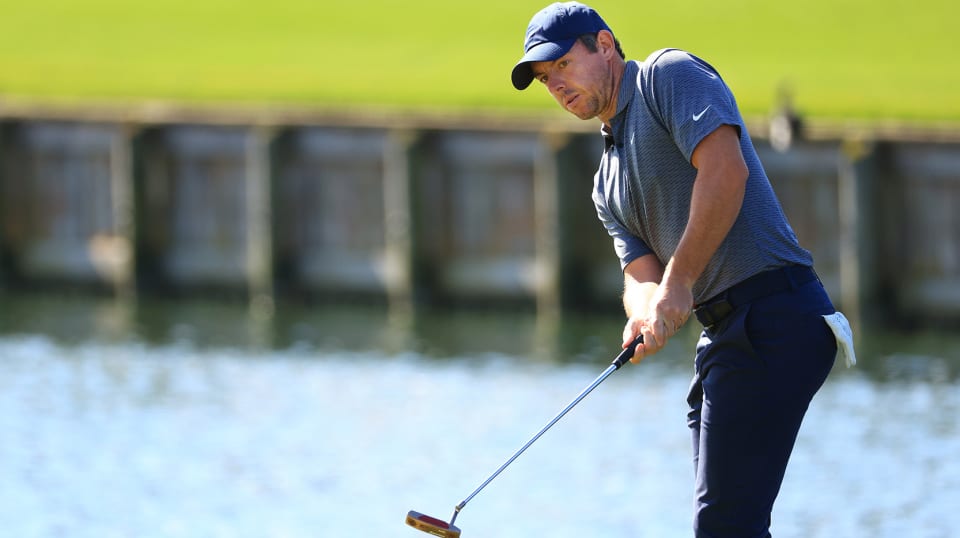 PONTE VEDRA BEACH, Fla. – Rory McIlroy got to keep the coveted gold PLAYERS Championship trophy for two years thanks to the COVID-19 pandemic enforced cancellation at TPC Sawgrass a year ago, but the 2019 champion won’t be getting it back in 2021.

The two-time FedExCup winner was a dejected figure as he signed for a 7-over 79 in the opening round – his career worst round at THE PLAYERS. Previously McIlroy’s hardest trip around TPC Sawgrass was a 77 in his first PLAYERS Championship in 2009 as a 20-year-old.

To add insult to injury McIlroy was paired with fellow former champion Sergio Garcia as the Spaniard paced the morning wave with a 7-under 65 – besting his Ryder Cup teammate by 14 shots.

Despite perfect conditions the damage was done on the opening nine holes as the group started on the 10th tee. McIlroy snapped his opening tee shot left into an unplayable lie, he ended up making double bogey, and things just got worse from there

“(It’s) very hard, especially when you’re trying to figure it out as you go along on course,” McIlroy said when asked how hard it is to recover from a shocking start.

“You’re trying to figure it out, but you still know you’re not really sure where the shots are coming from and then it’s hard to try to eliminate one side of the golf course, basically.”

After the double McIlroy soon turned a birdie chance into a bogey when he three-putted the 13th green from 24-feet. Another killer blow came on the iconic par-4 18th.

The Northern Irishman pulled his tee shot into the lake without covering much land prior and then, after a drop barely in front of the tee box, hit his third shot into the water as well. When all was said and done he was walking off with a quadruple bogey eight.

“I just hit a drive that started 10 yards left of where I was aiming and went on the wind and did the same thing with the 4-iron,” McIlroy lamented afterwards.

His 7-over 43 tied the highest start to a PGA TOUR event in his career, matching his efforts at the 2014 Memorial Tournament presented by Nationwide.

Back-to-back birdies to open the front side of the course after the turn brought hope of a fightback but they were followed with back-to-back bogeys. A final hole three-putt bogey summed up a tough day.

McIlroy wasn’t alone though as other former champions and big names seemingly kissed their chances goodbye right out of the gate.Henrik Stenson, the 2009 champion, shot 85 and 2015 conqueror Rickie Fowler had to settle for a 77 – three double bogeys negating any of the good work he managed.

Pre-tournament high hope Tony Finau dropped four shots in his opening three holes and never recovered – his 78 a career worst round at TPC Sawgrass by three shots came after his last eight rounds on the course were par or better.

Xander Schauffele, Tyrrell Hatton, 2012 champion Matt Kuchar and Hideki Matsuyama were part of a group to shoot 4-over 76s. Matsuyama shot a phantom 63 in the opening round of the 2020 PLAYERS before the cancellation but was nowhere near as sharp 12 months later.