The Chef of Champions was on his way to Fort Worth, Texas when we spoke early Monday, his work never done. Up at 3 a.m, he was going to cook for Rickie Fowler at the Charles Schwab Challenge, as he did the week Rickie won the Waste Management Phoenix Open in January.

He’s the man who travels with three knives and a pan.

Behind the scenes, 50-year-old Michael Parker has become an important component of Team Koepka. He’s known within the group as the guy who concocts fresh, clean, organic food that is fuel to burn for the four-time major champion, Brooks Koepka.

Parker has played an important role, be it when Koepka gained 20 pounds while depressed and on the couch after suffering a dislocated wrist a year ago, or when he lost 20 pounds earlier this year for a magazine photo shoot.

And his reputation for non-fat, nutritional, gourmet food is a topic getting some play around Tour locker rooms. When Koepka is off, Parker has cooked for the likes of Justin Thomas, Dustin Johnson and Jordan Spieth.

Koepka’s victory at the PGA Championship was his fourth major title with Parker at the stove. Parker was also the chef at the last three Open Championships for the assembled “frat house” of Tour players, including Fowler, Spieth, Jason Dufner, Kevin Kisner, Jimmy Walker and Zach Johnson.

“One of the things in having Chef Parker around is it makes Brooks’ routine very simple and very much the same,” says Koepka’s swing coach, Claude Harmon III. “When he wants to eat, it’s there for him. I’ve seen tennis players like Roger Federer do that at Wimbledon.”

This concept came together for Parker when he was working at The Floridian and had two Achilles surgeries, thanks to being on his feet for so many years in the kitchen.

Koepka who is a member at The Floridian, hired him on a weekly basis, which allows other players or friends to borrow or rent his chef. Brooks’ favorite dish, the “BK Special,” has become a Saturday night staple. That would be grilled organic chicken breast with quinoa, carrots, zucchini and green power veggies. He also favors the turkey chili that Parker lays out with homemade guacamole and pico. Another favorite is ribs with brown rice and sweet potato hash.

“The game has changed a lot,” Parker says. “I know what foods to give for energy – clean, green, organic foods, such as grated cauliflower and kale. We don’t do any fat.”

Parker really earns his money when players come in at 9 p.m. following late practice sessions or media commitments. He’s also under pressure during trips to Europe, where they don’t have ready access to Trader Joes and Whole Foods.

“Carnoustie was a nightmare,” says Parker, noting how hard it was to find avocados in the United Kingdom.

That’s what you call good eatin’. 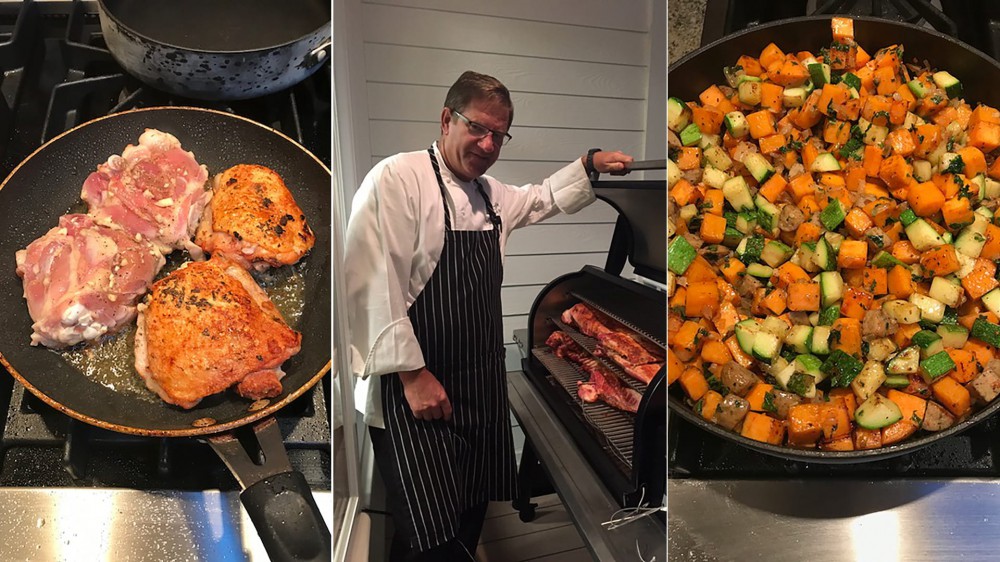 Arnaud 9 under through 7 on Web.com Tour