When it comes to physical tools, Ryan Brehm has buckets full.

He’s 6-foot-4 and 220 pounds of pure, Midwest power. The kind of guy that answers a question about his swing speed with, “Well, how fast do you want it to be? And I can do that for ya.” (For the record, even at age 35, Brehm games it around 123 mph – with plenty left in the tank – and produced an average ball speed, 183.3 mph, that ranked behind just five players last season on the PGA Tour.)

And don’t even think about crowding the plate when he throws an inside fastball on the pitcher’s mound.

“There is not one other athlete on the PGA Tour as talented as Ryan Brehm,” said Mike Dunphy, player development manager of Srixon/Cleveland Golf, who has known Brehm for nearly two decades. “How many other guys out there can hit it 360 and throw a 91-mph fastball?”

That’s why, in Dunphy’s mind, there’s no player he’d rather have with the ball in his hands facing the type of situation that Brehm was tasked with this week in Puerto Rico.

This time, though, Brehm needed to hit a home run.

He received his spot in the field at Grand Reserve Golf Club after cashing in the only start from a minor medical extension, which was granted to him after he tested positive for COVID-19 and missed last year’s Zurich Classic, where he was supposed to team with Joel Dahmen. While a solo second would allow Brehm to keep his Tour card and play out of the FedExCup Nos. 126-150 category for the rest of the season, it was essentially win or go home – or, in golf speak, back to the Korn Ferry Tour.

“It sounded like I had a bunch of pressure, but there really wasn’t,” Brehm said. “This was an opportunity for me to swing for the fences and see if we could win.”

Touch ‘em all. With his wife, Chelsey, on the bag, Brehm cruised to a six-shot win Sunday at the Puerto Rico Open to not only retain his card but lock it up for two more years.

When the last putt fell, the capper on a fourth straight sub-68 round and one-bogey week, Brehm raised both hands in the air, hugged and kissed his wife, and then said, simply, “Wow.”

As Brehm searched for words, nearly 1,400 miles away in Bluffton, South Carolina, Michigan State head coach Casey Lubahn was wiping away tears. Lubahn was an assistant coach under Mark Hankins when Brehm starred for the Spartans in the 2000s, was a groomsman in Brehm’s wedding and now also serves as Brehm’s swing instructor.

“He doesn’t need a lot of instruction,” Lubahn said as he sat inside a quiet room within the clubhouse at Colleton River Club, where he had snuck away from his team’s practice round to watch the last few holes of his friend’s life-changing victory on television. “He just wants someone to talk about golf with, or as I always joke, someone to argue with.”

Or, as the odds favored Sunday night, someone to rejoice with.

Perhaps it was appropriate that on the same day of Brehm’s win, Oklahoma senior Chris Gotterup, currently the top-ranked college player, dazzled in his Tour debut by tying for seventh. A decade and a half ago, Brehm was Gotterup, one of the top seniors in the country, a product of cold weather – Brehm from Mount Pleasant, Michigan; Gotterup from Little Silver, New Jersey – and possessing the God-given ability to destroy a golf ball.

Brehm turned professional in 2008, but after a lucrative equipment deal ended and he was still grinding away on the mini-tours, Brehm opted to quit chasing the Tour and accepted an assistant job at Michigan State, where he still holds several school records, including career scoring average (73.3) and wins (five).

While thankful for the opportunity, Brehm knew deep down that he’d have regrets if he didn’t take another crack at professional golf. So, off he went, navigating a couple of seasons in Canada before earning his Korn Ferry Tour card in 2016. That same season he won the tour’s regular season finale in Portland, finished sixth on the money list and secured his Tour card for the first time.

That first stay in the big leagues, though, was brief.

Those who know him well say Brehm has always been the guy that when he gets the driver straightened out, he wins by eight. Looking at his results his rookie season – 25 starts, one top-25 finish – the big bat clearly didn’t cooperate. He dropped back down to the minors for a couple of seasons before winning again on the KFT, in 2019, and parlaying that into a second stint on Tour. This time, Brehm struggled to cobble together starts over two pandemic-affected seasons. He got 38 of them, but ended up missing half of his cuts.

“He just always seemed to be the first alternate,” Lubahn said. “He was always the guy who didn’t know on Tuesday night if he was getting in on Thursday morning. That was him for two years.”

Added Brehm: “But I needed all of that to happen before I was ready to pull this off. All the things I’ve been through as a person have led me to this point, there’s no doubt about it.”

Nothing, though, has shaped who Brehm is today more than tragedy.

Brehm’s mother, Debbie, was the matriarch of the Brehm family, and her son’s biggest supporter throughout his golf career. But in September 2020, Debbie Brehm was diagnosed with a brain tumor. She died four months later at age 61. It all seemed to happen so quickly.

“I was not ready for that,” Brehm said. “I don’t think you ever are. It was horrific. Losing someone who means so much to you was very, very difficult, for a plethora of reasons, and everyone who goes through something like that understands. But looking through the rearview mirror, I think that was the worst and best thing that’s ever happened to me.”

Brehm misses his mother every day, but her death, he says, revealed to him what truly matters in life. Not money. Not material possessions. Not fame. But how you spend your time, and the people you spend that time with.

Brehm took a few months off following last summer’s failed attempt to keep his card via KFT Finals. It was during that period that Lubahn really noticed a shift in Brehm’s approach. He’d never talk about career marks he still hoped to achieve but rather just the desire to get better. And gradually, Brehm did just that.

He returned to action earlier this year and rolled off four straight made cuts on the KFT, including a T-9 in Bogota. He sits No. 22 in points on the developmental circuit, but with a break in the schedule, Brehm circled the Tour’s opposite-field event in Puerto Rico as the perfect place to put his one start into play.

While Scottie Scheffler was beating the Tour’s best at Bay Hill to collect a first-place prize of $2.16 million, Brehm earned a much smaller winner’s check – $666,000. But like Brehm said, the money didn’t matter. After 68 tries, he not only had his maiden title but also his first top-10, becoming the first player since Jason Gore in 2005 to collect his first win and top-10 in the same Tour event.

More importantly, Brehm no longer has to stress about getting starts. He’s also into next week’s Player Championship.

“I’m looking forward to being able to pick my weeks,” Brehm said, “and go try and make some noise.”

He’ll have plenty of people cheering him on, too. Dunphy loves to tell a story about Brehm’s early years as a pro. When Dunphy would scout talent in Canada, he’d hear about several players who’d scored great deals at the local hotel. Truth was, they got the discounted rates from Brehm, whose family was in the hotel business.

“We used to call it the ‘Brehm Code,'” Dunphy said. “He took care of everybody that was around him. Every one of his teammates looked up to him like you couldn’t believe. Ryan Brehm actually gives a s— about other people. Truly. That’s rare.”

All the physical gifts in the world – the power of an ox, and apparently the heart of a lion.

“That’s why as soon as this guy wins,” said Dunphy, who was speaking over the phone with Brehm on the last few holes, “I’m going to cry my eyes out because I think that much of him.” 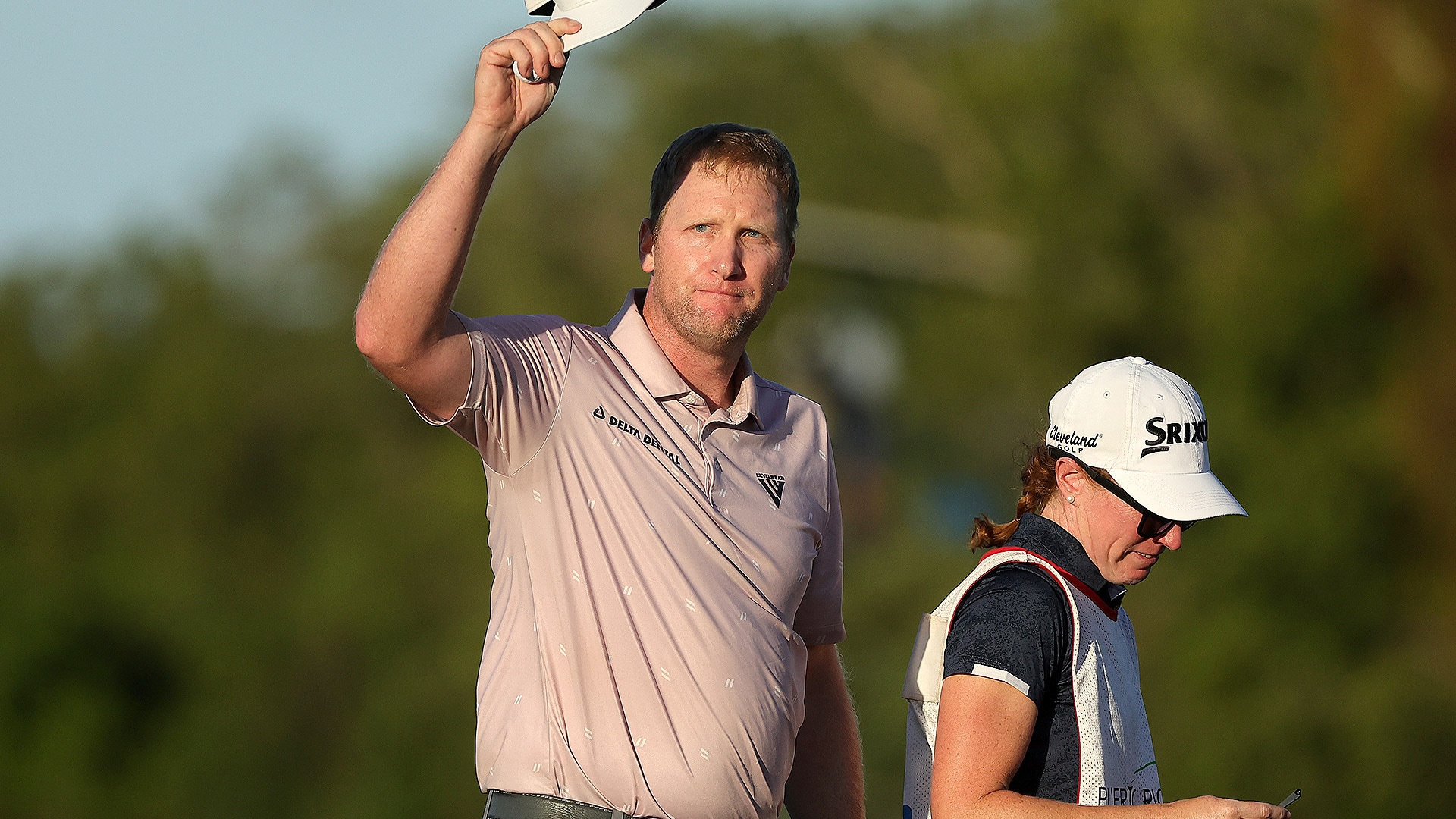