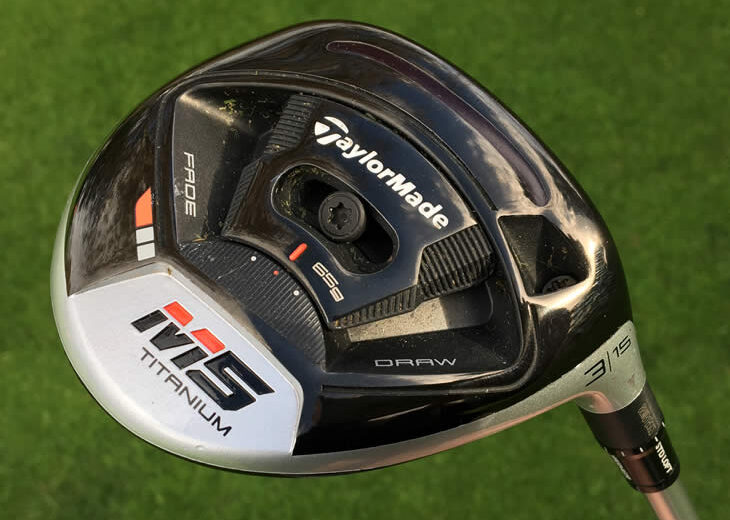 TaylorMade M5 Fairway Review – The TaylorMade M5 fairway is their adjustable offering in this sector and with this new model they have overhauled the previous M3 fairway completely. 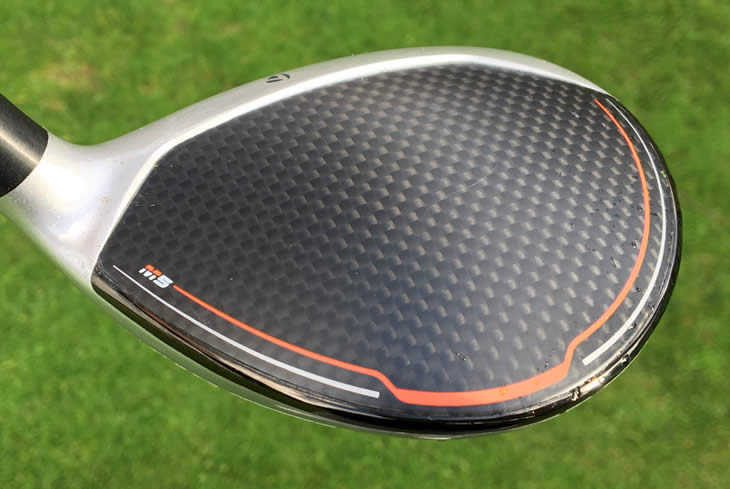 The head is built around the adjustable 65g steel weight in the centre of the sole that is the result of a new designer coming into TaylorMade with a fresh pair of eyes.

This is one of the biggest weights I have seen in a fairway and it comprises 30% of the head mass, so it should offer a lot of variation.

It also drops the weight low in the head for a better launch. This lower CG position comes about because the body of the head is made from titanium and the crown from a new 5 layer carbon composite.

The previous M3 fairway had a carbon crown on a steel body, so you can see how TaylorMade has really gone to town on the M5.

In testing, moving the weight from Fade to Draw settings had a reasonable effect on flight, but it also changes the balance of the club a little too, which might appeal to some.

The shot shape element of the adjustable weight does seem to be nullified by the other new feature of the Twist Face, which we first saw on the M3 driver and is now on the M5 driver.

This is the first time Twist Face has appeared on a TaylorMade fairway and it adds 1.5° extra loft in the high toe impact area and reduces the loft by the same amount in the low heel impact area to straighten your shots out.

TaylorMade claim about 15 yards less variation in shot dispersion from the Twist Face, which is impressive. This might be good in a fairway designed for forgiveness like the M6 fairway, but seems a little odd in one with an adjustable weight that is there to help you create shot shapes.

However, if you have a really bad fade or draw, then putting the weight in the correct side might get it back into the realms where the Twist Face can take over.

Comparing the M5 fairway to the previous M3 on GC Quad with the same shaft, the M5 really showed how its change in design to a lower CG club with more weight towards the back, was able to increase launch and spin.

It may not have gone as far for me, but the ball speed was down so that could have been the shaft suiting the M3 better for me. However the M5 did feel a little easier to get going as well and the sound and feel was better too, so it is an improvement in that respect.

There is a 3 and a 5 wood option and both come with a slimmer adjustable hosel that can vary the loft by a larger margin of +/- 2°.

For those who want a powerful driving fairway then there is also a new Rocket 3 option at 14°.

As a piece of engineering and club tech, the M6 fairway is very impressive. The use of high end materials and a unique and simple alternative to movable weights really makes you sit up and take notice.

The sound, feel and performance is all very good and with a more compact head than the M6 fairway, the M5 should appeal to those with more speed and higher spin rates.

However there is one issue and that is the price you have to pay for all this tech. At an RRP of £369/$399 it is almost a driver price for a club you will probably use less.

You can see why, but if you test out the TaylorMade M6 fairway, you will also see that you can get a non-adjustable, but more forgiving fairway for £100/$100 less that gives the same or greater distance.

Like the M6 driver, the spin profile of the M6 fairway has been improved and now this is more of an option for mid to high swing speed players. So unless you have money to burn or a real need for the features offered by the M5 fairway, I would sneak off and try out the M6.