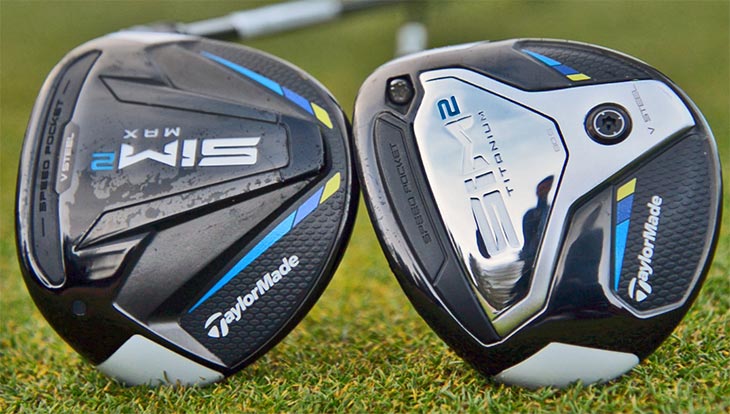 TaylorMade SIM2 Fairway Wood Review – TaylorMade’s SIM metals were all the rage in 2020, so much so that some golfers had to wait for months to get their hands on one. TaylorMade’s marketing is always strong, but with two of the three male major winners using TaylorMade gear in 2020. the manufacturing giant is backing it up too.What’s also impressive is the number of non-contracted players who have used their woods in recent years too. The likes of Viktor Hovland, Patrick Reed and Brooks Koepka have all had TaylorMade drivers or fairways in their bags at some point, whilst Tommy Fleetwood was so impressed with the gear that he signed a full equipment contract with them in the off-season.

So how do you improve on the SIM? Well, the SIM2 range has now arrived, and TaylorMade’s idea is to strip the head down and work on improving each individual piece rather than making huge wholesale changes. 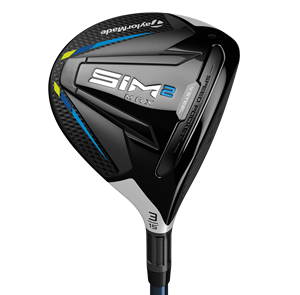 The story behind these new fairway woods is that TaylorMade are looking to add a little more forgiveness whilst also increasing the appeal of the club from address, in an attempt to inspire more confidence for the golfer.

The main piece of technology in these fairways is the V Steel, which was reintroduced for last year’s SIM range and which promotes better turf interaction and playability from a variety of different lies.

The SIM2 Fairways also benefit from improved weight distribution which enables the Centre of Gravity (CG) to be positioned in the optimum position for each head, which promotes better launch conditions and spin rates for each club.

As you would imagine, all three fairways also retain the Twist Face technology, which tweaks the loft at different parts of the face to help correct mishits and get you hitting more fairways.

The fairways feature a carbon crown with a contrasting chalk colour along the top line, which is said to help frame the ball better at address in order to improve alignment, encouraging you to hit straighter shots more often. To be honest as you can probably see, the changes form last year’s model to this year’s are very marginal.

The models are the same as in the 2020 SIM range also, with the three options:

SIM2 Ti Fairway – This is the lower spinning, lower launching head used by the likes of DJ, Rory and Charley Hull on tour. The head size has been reduced from 180cc to 170cc. There’s a carbon crown and 80g steel sole plate, while the CG has been repositioned to 12.1mm from the ground for greater ball speed and higher MOI, which makes it a little more forgiving. This is the ultimate player’s fairway wood, with a loft sleeve to match, and it is priced at £90 more than the other two models.

SIM2 Max Fairway – The Max features a large 190cc footprint and progressive face sizes to achieve forgiveness, along with C300 steel face. The V Steel focuses on turf interaction and playability, whilst the weighting has been shifted in order to maximise launch and forgiveness in a package that is designed to appeal to the masses.

SIM2 Max D Fairway – The Max D is the draw biased head with a higher MOI and extra weight added to the heel in order to help fight that dreaded slice and get the ball turning over. The 195cc head has a bigger profile and face for maximum forgiveness, and is available in 16, 19, and 22 degrees.

I visited LSH Autos Mercedes Benz, Stockport to trial both the SIM2 Ti and SIM2 Max on the Trackman 4 with Titleist ProV1x balls. I’ve never been a huge fairway wood fan as I would count my driver as one of my strengths, so I was interested to see whether either of these models would be worthy of a place in my bag.

On the crown there isn’t a great deal of change between the SIM and SIM2. The colour is a slightly darker grey, while the light blue of the SIM has been replaced by an electric blue and a splash of yellow added.

I do like the chalk white strip on the crown and at the join with the face, as I found it shapes the head and aligns the face to the target.

The fairways feel firm, solid and quick – just like a TaylorMade wood should do. I was also pretty impressed by the ease of strike from different position across the face, which perhaps suggests that the Twist Face really does work…

Now last year I loved the SIM Ti but this year I’ve not managed to play so much and speed-wise I’m not the golfer I was once! My first two warm up shots were heeled and went about 60 yards… To hit this club well it takes some speed and plenty of concentration.

Throughout my testing I felt as if there was more pressure to make a good swing and strike this club well, which I often get when trying these types of clubs which are aimed at tour players.

My strike was a little inconsistent with the Ti fairway and as a result my numbers suffered a little, with the ball speed averaging around 4mph less than with the SIM2 Max, and this translated to nearly 10 yards less carry too.

DJ, I’ll leave this one to you.

As soon as I started hitting this fairway it felt like a dream. The slightly bigger head and increase in loft made me more confident at address, and the numbers reflected that.

I barely missed a shot and as my confidence grew, the distances started to jump up too. The Max topped out at a swing speed of 87mph and a carry of 198 yards, which was only a slight drop on my driver numbers for that day. very impressive.

The performance was right where I wanted it to be and the slight draw shape was great, whilst the distances produced were as long as anything I have tested. It was certainly edging out the Ping G425 Fairways.

After getting a real feel good factor, I couldn’t wait to get it out on to the golf course. And then, our third lockdown was announced…

Luckily I managed to sneak the SIM2 Max in to my bag over the Christmas break for a round of golf, and I really do think that it added to my game.

Last year I loved the SIM Ti 3 wood, but this year it really highlighted the drop in performance of my game, as well as the fact that this isn’t a particularly forgiving club.

The combination of lockdown, playing less golf and less gym work was highlighted when I started hitting it, and at my swing speed you really have to be precise with your strike and delivery. If you’d seen my first couple of shots in the simulator, you’d agree! So if you’re someone who may be similar to me experiencing a slight drop off, the Ti may not be for you.

Typically when hitting a low spin fairway wood like this, I can get some of my longest shots when I really catch it compared to a ‘standard’ fairway, but I didn’t find this to be the case.

The Ti model will find its way into the bags of male tour players and some elite golfers too that swing is fast and strike it well, but the SIM2 Max will be the one that most of us will use.

The difference between both models was quite obvious for me, and I like that as It makes it easier to distinguish between the two. It should also help with your decision making at a fitting as it will be obvious which club best suits you.

The SIM2 Max was really consistent, with only 7 yards between all of my shots in the simulator. It was like I was hitting the same shot on repeat. I was so confident with it, and it’s the closest club I have found to the Titleist TSi2 Fairway. At the moment, the SIM2 Fairway is a benchmark for me.

I would definitely use the SIM2 Max. The yardage is very similar to the Titleist TSi from my testing, so I can’t wait to give them a proper head to head test out on the course to find out which goes in my bag for 2021. It’s great looking and very forgiving, and so far the performance seems to match too.

SIM2 Ti – Ideal for low handicappers and players looking for a seriously long fairway, and consistently find the centre of the face.

SIM2 Max – So many golfers should love this fairway. If you’re in the market for a new one, it’s the perfect model for anyone to add to their testing list.

SIM2 Max D – Aimed more towards the higher handicapper or for a golfer who is struggling with fading the ball too much. This club is excellent for forgiveness and will hopefully straighten your ball flight out a little bit. At 195 cc this head size will also make it a real weapon off the tee.