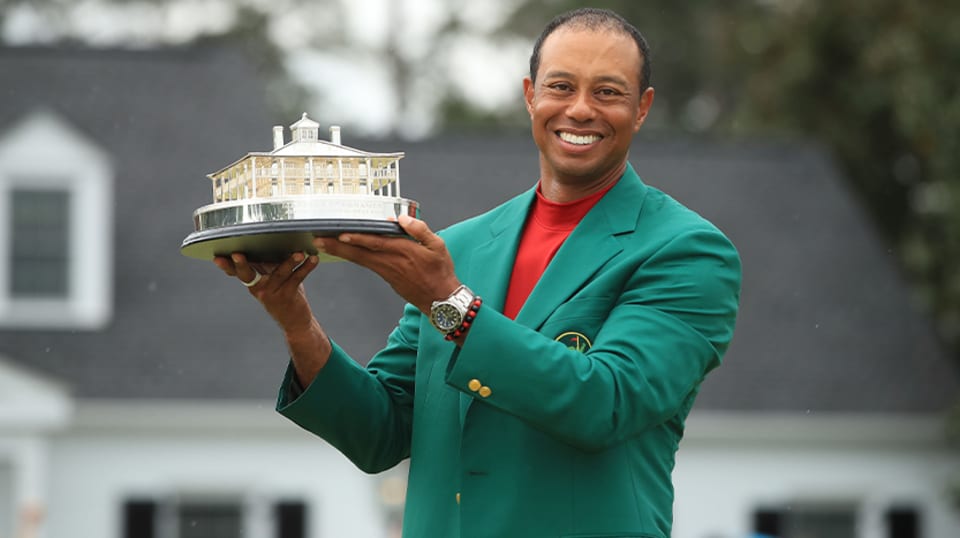 The Masters has a new date, but the amount of excitement remains unchanged.

Tiger Woods is the defending champion after holding onto his Green Jacket for 19 months due to the impact of COVID-19 on the PGA TOUR schedule.

A stout list of chasers will look to slip their arms into a Green Jacket, including reigning FedExCup champion Dustin Johnson, two-time FedExCup winner Rory McIlroy – who’s looking to complete the career Grand Slam – and the most recent major winners, Bryson DeChambeau and Collin Morikawa. Morikawa is making his Masters debut.

FIELD NOTES: Ninety-four golfers will tee it up at the Masters… The field for this edition was confirmed earlier in 2020, which means no one could earn their way in at the last minute or via his play through the Return to Golf… Twenty-six participants will be playing the Masters for the first time, including world No. 4 Morikawa and reigning PGA TOUR Rookie of the Year Scottie Scheffler… Reigning U.S. Amateur winner Andy Ogletree leads the six-golfer amateur contingent. John Augenstein, the runner-up to Ogletree at Pinehurst in 2019, also is in the field. Augenstein is No. 6 in the PGA TOUR University rankings. The top 5 after the NCAA Championship earn Korn Ferry Tour status. Augenstein can earn PGA TOUR U points at Augusta National … Tiger Woods looks to become the first golfer in history to win the Masters in back-to-back years twice. Jack Nicklaus (1965-66) and Nick Faldo (1989-90) achieved the feat while Woods pulled the trick in 2001-02… Four Canadians will tee it up, led by 2003 winner Mike Weir – the most that country has ever had in the Masters…  Phil Mickelson, who has won twice on PGA TOUR Champions in two starts since turning 50 this year, is looking to become the oldest major winner ever. Mickelson is one of 15 past champions in the field… DeChambeau is on the hunt for his second major in a row. The last man to win back-to-back majors was Jordan Spieth in 2015.

COURSE: Augusta National Golf Club, 7,475 yards, par 72. Spring’s tradition unlike any other has morphed into a fall classic for 2020. That likely means fewer flowers at the former site of Fruitland Nurseries. From a golf course perspective, the Bobby Jones/Alistair McKenzie classic will likely play longer than it does in the spring, given the weather and the grass being much fresher versus April. According to many TOUR players who have been asked about the course over the last few months, there’s an ongoing belief that Augusta National has resources to make November’s conditions as similar to April as possible. There were no changes to the course for the 2020 edition of the tournament, but land continues to be purchased around the course for potential future efforts.

STORYLINES: Rory McIlroy is gunning for the career Grand Slam once again after winning the 2014 Open Championship… There will be no patrons at Augusta National in 2020. That’s not the only change for the first November edition of the Masters. Golfers will go off split tees and there will be a morning and afternoon wave… Jordan Spieth looks to quash his winless drought that dates back to the 2017 Open Championship at a place where he is very comfortable. The past FedExCup champion has a win, two seconds, and a third at Augusta National… Morikawa, Justin Thomas, and Dustin Johnson are among the large group of notables looking to notch their second major championship … Xander Schauffele, Patrick Cantlay, and Tony Finau are amongst the group looking to capture their maiden majors. Schauffele has finished in the top-10 in six of the last 10 majors he’s played…  Woods is looking to tie Jack Nicklaus for the most Green Jackets of all time (six). He missed the cut at the U.S. Open earlier this season and finished T37 at the PGA Championship in August.

LAST TIME: Tiger Woods held off a strong leaderboard to win his fifth Green Jacket – and first major since 2008. A final-round 70 put Woods at 13 under, one shot ahead of Johnson, Schauffele, and Brooks Koepka. After several of his closest pursuers hit their tee shots into the water on the par-3 12th hole, Woods birdied Nos. 13, 15, and 16 to eventually pull ahead for good. Despite a bogey on the par-4 18th, it was all he needed to capture his 15th major title in his “return to glory.” Woods was two shots back of the 54-hole lead held by Francesco Molinari, who shot 74 Sunday to finish T5 alongside Jason Day, Webb Simpson, and Finau, who was also in the final group Sunday with Woods and Molinari.