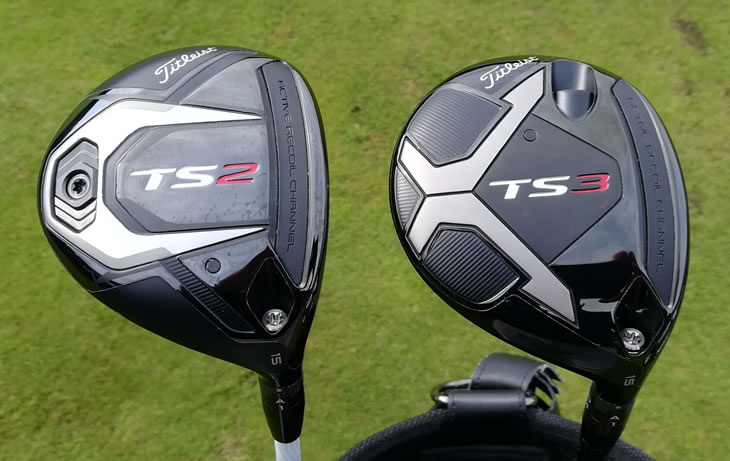 Titleist TS2 TS3 Fairway Review – One of the successes of the Titleist 917 range was the fairway wood, which found its way in to many a tour bag. It was consistent, classy and surprisingly long so the replacement TS range has a lot to live up to.

The TS stands for Titleist Speed, named after the internal ‘Project’ of the same name and as before there are two versions, the TS2 and TS3. 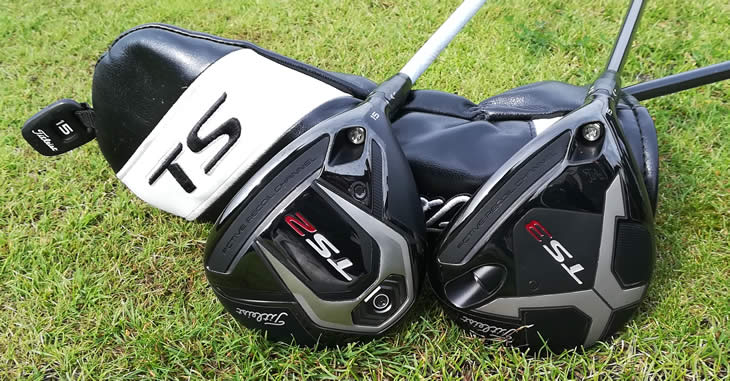 The head sizes are meant to be about the same by volume, but the TS2 has the slightly larger look than the 917 F2 did previously.

The TS fairway heads are still made from steel and the crown has been made 27% thinner, which sounds grand but equates to under 0.1mm.

The face is also 0.2mm thinner and 1g lighter in order to generate more speed and also to enable the saved weight to be moved lower and further back to improve the MOI.

Whilst this increases MOI by 11% on 917, most of the gain comes with the TS2 fairway, which has a slightly higher MOI than TS3.

As with before, you choice of model from the TS fairway range is really going to be determined by your swing as they both have their own pros and cons as I shall now explain.

I am going to start with the slightly more compact TS3 that continues with a similar design to the 917 with all the benefits mentioned above.

The ARC slot in the sole has been made taller in both models to improve the speed and launch and is filled with a polymer to make it go across the turf more smoothly.

Behind that is the SureFit CG weight, which is a cylinder that slots into a tube in the sole so you can vary the amount of weight in the bottom of the club.

As before there is a range of different weights that can be tested at a Titleist fitting session to see which one suits your swing. They can be used to adjust the swing weight to suit your swing and the length and weight of shaft that gives you the best performance.

With 917 you got a neutral and an unbalanced weight to swap, but now there is just one weight that has a magnetic tip at one end that can be swapped to change the neutral weight into an unbalanced one.

This a very clever solution to save you losing the other weight and of course saves Titleist the cost of sending two weights out instead of one which we could classify as being environmentally friendly.

The effect of changing the weight is noticeable, although flipping the heavy end one way or the other will also change the feel of the head, which may not always deliver the intended flight. However it is another fitting option and one of the best and more useful adjustable weight systems on the market.

At address the TS3 has a slightly larger profile than the 917 F3, which is welcome as is the return to the more traditional black Titleist head colour.

Eagle eyed readers will also spot that the graphic on the crown has also been switched back to the sharp end of the triangle pointing towards the ball.

I do like the TS3, but with the SureFit CG weight positioned towards the front half of the sole, it is the lower spinning option of the TS fairways and for me I was struggling to get enough launch and speed for it to outperform TS2. Therefore, this is probably going to suit above average swing speed players or those who want a fairway that can be tweaked to provide a certain shape of shot.

The rest of us need to head on down to try out the Titleist TS2 fairway.

Unlike the 917 F2, the TS2 does not have the adjustable SureFit CG cylinder in the sole. Instead it has a single sole weight in the rear to draw the weight low and back.

Unlike most manufacturers, this is part of the adjustable options at fitting which is good to see.

The profile seems a little larger than TS3 and 917 and the deeper head still has a nice rounded look to it at address.

I do like a generous looking fairway and the TS2 fits the bill whilst at the same time not losing any of the benefits of sound and feel which is very good too.

The larger head means that this is the higher spinning, higher flying and more forgiving model of the two, but that only puts it in the middle of the pack as far as I am concerned.

There is a wide choice of four shafts and even though I was fitted into the Kuro Kage in the TS2 driver, it was the Mitsubishi Tensei that was the right one for me in the fairway, principally because it felt lighter to swing.

You would think that the driver and fairway shaft should be the same, but life sometimes isn’t like that in fitting land so book a long enough session to do both clubs properly if you do choose to go for the TS woods.

Whilst we used Trackman for all the options to narrow it down to the 15° TS2 in A1 on the SureFit Tour adjustable hosel, the comparison below is how my optimised TS2 fared against my optimised 917 D3 fairway from last time around.

As you can see I was getting an extra 2mph of ball speed from the new TS2 face and the slightly higher level of spin increased the flight giving an extra 3 yards of carry. It was also more consistent in the delivery of that ball speed too.

Now the deeper head of the TS2 should do this, but the important thing here is that this is my optimum from the TS range, whereas the 917 F2 was too spinny before so I had to take the lower spinning 917 F3 as that was best then.

Therefore effectively the relatively lower spin of TS2 against 917 D2 now makes that larger headed, more forgiving head more of an option. The higher spin and flight means that it will also be easier to launch from the fairway, which is something the 917 struggled with if the lie was not in your favour.

The Titleist TS fairway is certainly not worse and for more players is probably better. You might not see the speed and distance gains over 917 that you will with the Titleist TS driver, but that is because the 917 fairway was sneaky good.

The advantage over 917 is that you could get similar or maybe slightly better performance from a larger more forgiving head, particularly if you are in F3 at present.

With the TS2 in particular you have a fairway that can suit a wider range of handicaps right into the 20s so if you have never tried a Titleist fairway out before, then this is the one to have a go with.