PONTE VEDRA BEACH, Fla. – After sweating the cut line, Tiger Woods turned in a third-round performance at The Players Championship that was a thing of beauty. Some thoughts and reflections from walking all 18 holes with the man as he vaulted up the leaderboard at TPC Sawgrass:

• Woods went out in 6-under 30, ultimately shooting a 7-under 65 that serves as his lowest career round in 66 trips around TPC Sawgrass. It also marked his lowest score of the season, his best since a 65 at the 2015 Wyndham Championship and his lowest score to par since the 2013 WGC-Bridgestone Invitational.

• Woods credited his success to finally getting off to a hot start, having birdied four of his first five holes. He admitted that after reaching 8 under through 12 holes, he felt a course-record 62 was within reach. “Realistically, I probably could have got a couple more out of it and got to 10 for the day,” he said.

• Woods’ third-round stat line: 11 of 14 fairways, 15 of 18 greens in regulation and 27 putts – his best effort all week in each category. “Eventually I was going to put all the pieces together,” he said. “Today, for the most part, I did that.”

• Fueling Woods’ hot start was a potent combination of accurate irons and timely putting. After making only 59 feet worth of putts during a second-round 71, Woods made more than 64 feet of putts over just his first seven holes Saturday. He listed his 3-iron approaches on Nos. 8, 9 and 11 among his best long irons of the week.

• According to Woods, his solid ball-striking traced back to a positive warm-up session on the range. “I just felt more comfortable with it and consequently today I was able to shape the ball both ways and started to control it a little bit better today,” he said.

• In a round chock full of highlights, there were a few shots he wanted to have back. Woods remains vexed by the tee shot at No. 14, having pushed it into the thick rough and dunes each of the first three days. And his chances of tying the course record went out the window when he missed a 7-footer for birdie on No. 16. “Wish I could have gotten that one,” he said.

• After starting the day at the bottom of the pack and 14 shots off the lead, Woods was T-8 after he finished his round. But with the leaders still yet to tee off, he didn’t expect that standing to last very long. “With this heat and humidity and these greens as soft as they are, these guys are going to tear this place apart.” 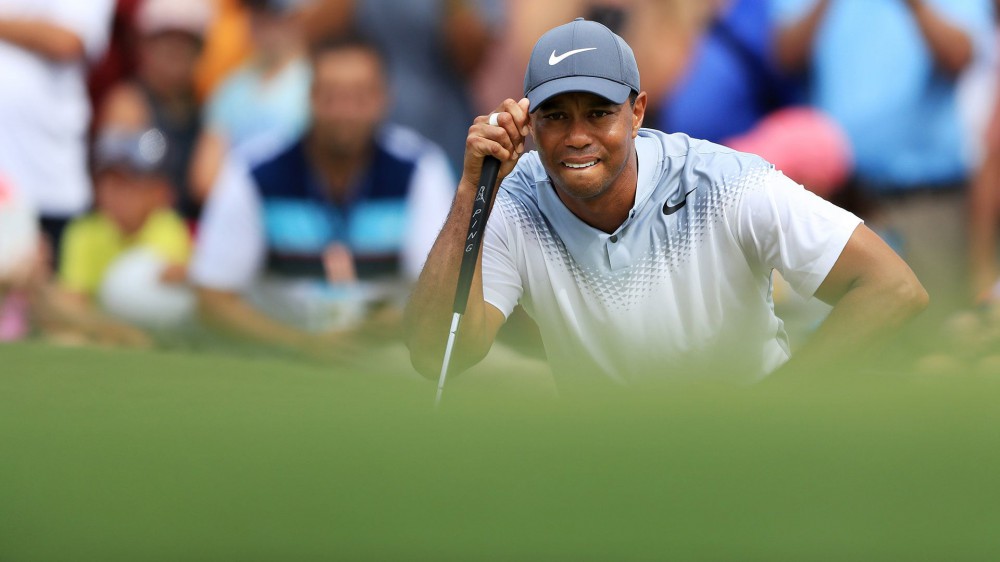