LOS ANGELES – A marathon day ended for Tiger Woods when second-round play was halted because of darkness, and it couldn’t have come soon enough. Some thoughts from a wet, chilly day at the Genesis Open:

• Tiger played 30 holes on Friday – the most he’s played in a tournament since going 29 on Day 2 at last year’s Ryder Cup – and it showed. “It was a tough day. I’m stiff right now,” he said. He was at 1 under par with six holes remaining Saturday morning. He’s currently just one shot inside the cut line.

• Putting continued to be a problem in Round 2. After needing 34 putts, which included four three-putts, in his first round, he remained 88th in the field in strokes gained: putting and he made just three putts outside 10 feet.

• Following two days of rain and with a cold wind gusting across Riviera Country Club, the layout played particularly long. Twice during his second round, at the 18th and second holes, Tiger had to hit fairway wood for his approach shot into a par 4. “The temperature kept dropping, wind kept picking up, laying down, picking up, laying down. There’s some long holes out there,” he said.

• For much of the day Tiger’s ball-striking was encouraging, including hitting 17 of 18 greens in regulation in Round 1. But fatigue seemed to set in during the second round and he was 6 of 12 in greens hit and 7 of 10 in fairways hit for his second round. It was a rough day for many on Friday at Riviera. But for a 43-year-old with four back surgeries, the conditions appeared to take a greater toll.

• In a historical flip, Tiger did change his fortunes on the short par-4 10th hole. Although he’s never played the iconic hole well in his career he birdied it twice on Friday.

Tiger will resume his second round at 10 a.m. ET on Saturday and, if he makes the cut, likely wouldn’t tee off until after 6:30 p.m. for Round 3. Which means it could be another long day. 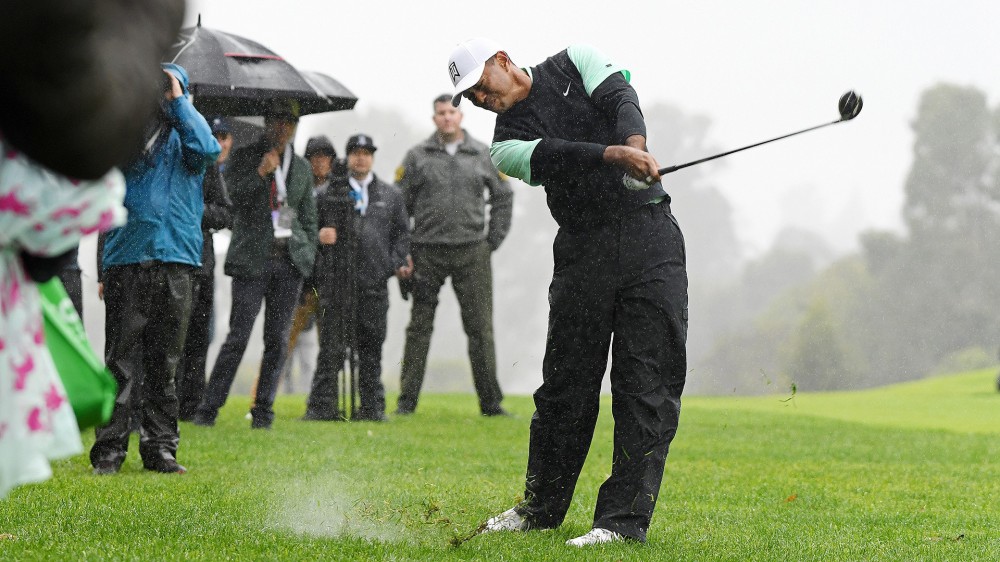