LAS VEGAS – It was a day that featured plenty of hype, but not the high-level golf to match. Here are a few thoughts and observations after watching Tiger Woods and Phil Mickelson go toe-to-toe for five hours before their $9 million match was settled on a tee shot from the putting green:

• Let’s be clear here. While Mickelson walked away with the cash, holing a 4-foot birdie putt on the 22nd hole, this was largely a pillow fight. The golf was filled with tentative shots and missed putts, with neither star making a putt of any significant length. What was billed as a shootout across forward tees to easy pins, complete with Mickelson calling his shot with an opening-hole wager, turned into a grinding battle of pars that made it seem the U.S. Open was up for grabs.

• He may not have won the match, but Woods authored the lone true highlight of the afternoon when he chipped in from behind the 17th green to square the match. With Mickelson in tight and seemingly about to putt for the win, Woods bumped his chip and watched it track the whole way, eliciting a reaction of days gone by. “I just did not want the match to end on that hole,” Woods said.

• If we’re talking regulation, the one that Woods probably wants back is the 10-footer for birdie on No. 14. Having gotten his first lead of the match two holes prior, he had a chance to get a leg up on Mickelson heading into the home stretch. Instead, his putt bobbled to the right or, as Mickelson claimed, was “willed” out of the hole by Lefty. Either way, it was a missed opportunity at a critical juncture, followed by another miss from similar range that would have scooped the pot on the 19th hole.

• And once we got to overtime, hang on to your hats. Apparently Tiger needs to spend more time hitting 90-yard wedges off his practice greens in Jupiter, because his first two efforts on the 20th and 21st holes both flew the green. By the time he got his wedge game dialed in with his third attempt, Mickelson had hit his to kick-in range to put the contest on ice. (Click here for the scoring)

• Some of the window dressing that was promised failed to deliver. Yes, there were side bets, but they largely felt scripted and the one time things got spontaneous in the seventh fairway, Mickelson backed down. Even the long drive hole fizzled out when both players found the fairway bunker.

• Outside of some ribbing following Woods’ late chip-in, the trash talk was almost non-existent. Woods muttered a few curse words along the way, but they were mostly directed at himself in response to frustrating play. The back-and-forth between the two didn’t seem to translate from the press conference to the course.

• The side bets all nearly went Mickelson’s way: he took Woods for $600,000 by winning all three closest-to-the-pin contests on par-3s, and the only side cash that Woods won (for charity) came on the opening hole when Mickelson missed a 12-footer for birdie.

• Overall, it was an interesting experiment that ended on a makeshift hole in the dark. There were a few moments of drama, many more moments of mediocre golf. But it went down to the wire, and both players had the match within reach at one point. But Woods missed his chances, and Mickelson (eventually) capitalized on one of his.

• Now it’s a short break for Tiger (and for Tracker), with the final start of the year coming next week at the Hero World Challenge in the Bahamas, where Woods will host an 18-man field. 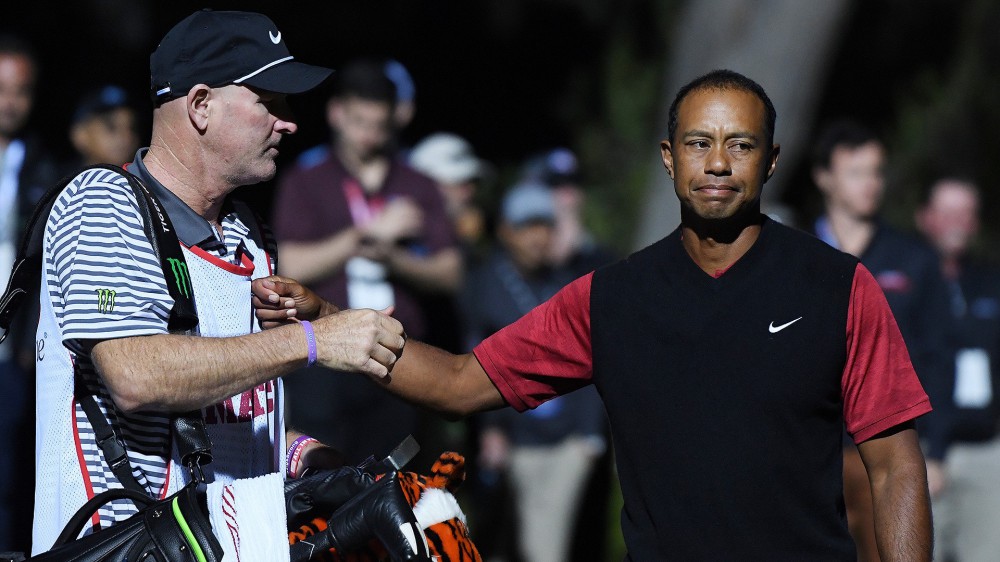