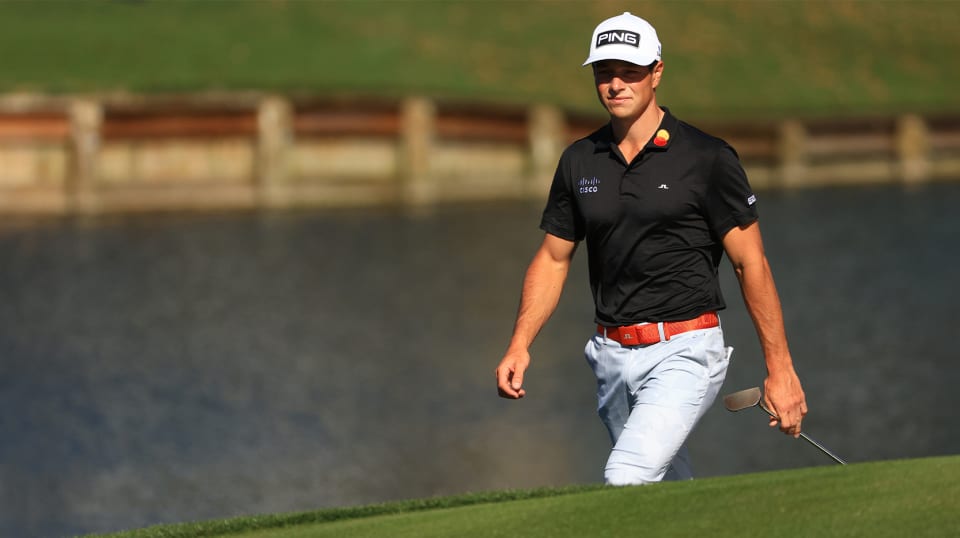 PONTE VEDRA BEACH, Fla. – Norway’s Viktor Hovland escaped disqualification but was assessed a two-stroke penalty after signing his scorecard in the first round of THE PLAYERS Championship at TPC Sawgrass on Thursday.

Hovland’s score went from 70 to 72 after he was docked for inadvertently playing his ball from the wrong spot on the green at the par-4 15th hole.

After hearing that video showed him violating Rule 14.7, Hovland and his caddie got in touch with the Rules Committee, which reviewed the tape. It confirmed that he had indeed erred on the 15th green. In order to clear the line for playing partner, Justin Thomas, Hovland moved his ball mark the length of one putter head away. When he went to replace it, he mistakenly moved it one putter head in the same direction instead of back to its original spot.

He played the next shot two putter heads from where he was supposed to be.

“I think he heard about it from someone in his home country,” said Rules official Gary Young. “I think it might have shown up on the feed in Norway. He and his caddie reached out to our committee and asked if we had any video of it, because he had no recollection of doing it.”

The video showed Hovland did in fact commit the infraction, moving his mark twice in the same direction before replacing the ball.

Instead of getting disqualified for signing an incorrect card, Hovland was saved by Rule 3.3b3, which states a player can be retroactively penalized shots for unknowingly violating a rule.

“He had left the property,” Young said. “I sent him a clip of the video, and he’s very comfortable with the result, that he’s getting the penalty. He understands the rule. He didn’t know he did it.”

Hovland has been on a meteoric rise up the world ranking (13) and the FedExCup standings (third) after recording top-five finishes, including a win at the Mayakoba Golf Classic presented by UNIFIN, in his four of his last six starts. He’ll go into the second round seven behind Sergio Garcia.