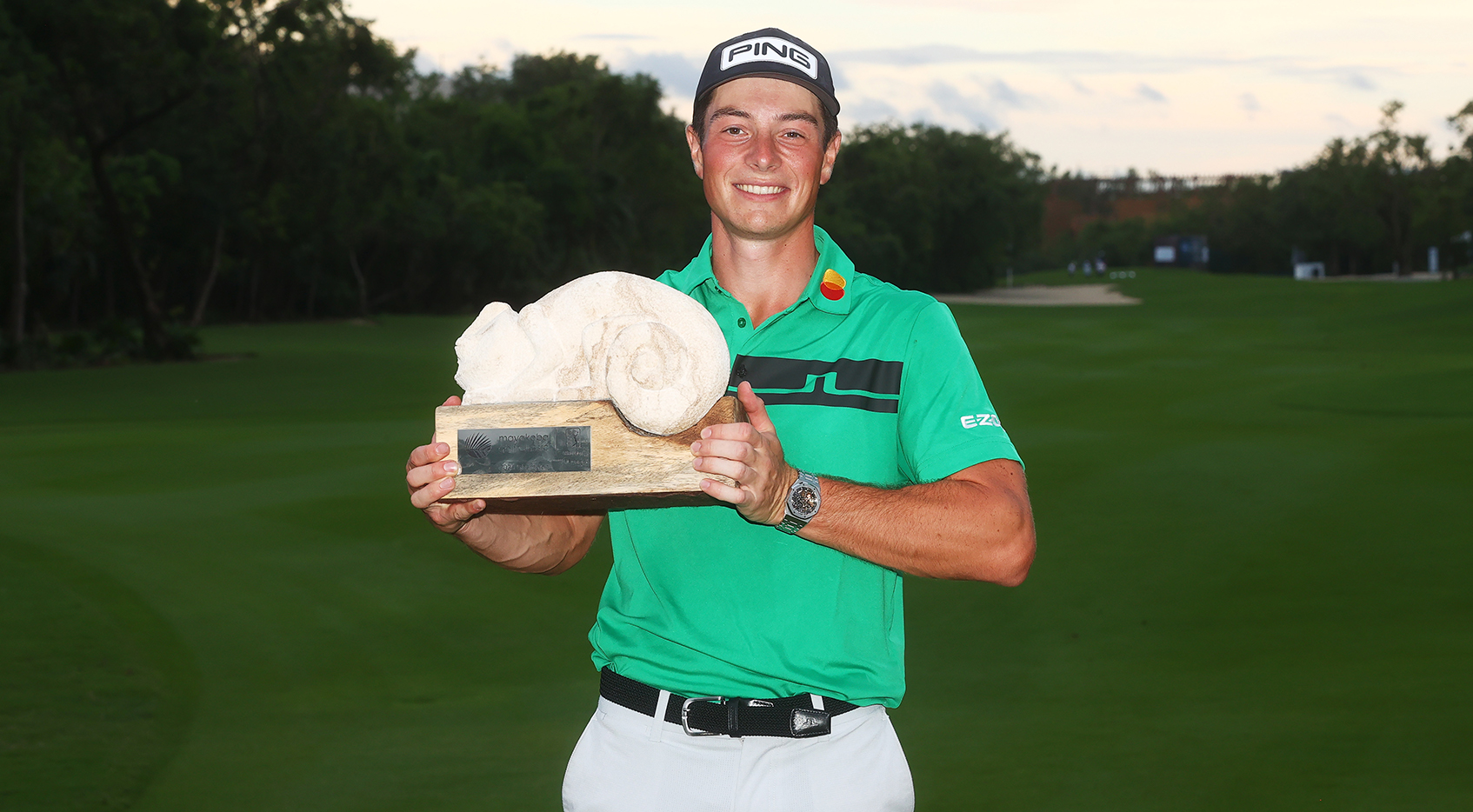 Hovland earned his first TOUR title at the Puerto Rico Open this past February, where he drained a 25-footer for birdie on the 72nd hole to finish one ahead of Josh Teater.

Once again, his even-keeled life perspective paid dividends down the stretch at El Camaleon GC. He got up-and-down from a greenside bunker on the 515-yard, par-4 16th to stay tied with Wise, then became the first player to win the Mayakoba Golf Classic with a 72nd-hole birdie in the event’s 14-year history.

Hovland didn’t treat the Korn Ferry Tour Finals as ‘relegation’ – he saw it as an opportunity to fulfill a dream. His big-picture perspective proved useful. Fifteen months after earning a card, he now stands No. 3 in the FedExCup standings.

“I feel like it’s just a personality trait, being kind of easygoing,” said Hovland of his ability to shake off adversity with ease. “I don’t like to worry about things, even though (worry) happens. I think you get it through practice and confidence in your abilities.

“It’s definitely a learned skill. I’m usually pretty bad at most things that I do, but if I get hooked on something, I’m going to put down some time and effort, until I feel like I can do it well. Golf has been one of those things.”

It certainly has. Hovland has yet to miss a cut since the Return to Golf in June. He has made 16 TOUR starts in that span, with 11 top-25 finishes.

During the pandemic hiatus, Hovland made sure to enjoy some downtime in Stillwater – he and Eckroat enjoy watching war movies – but also focused on maximizing his time at the course.

While in past times he might “hit balls for 30 minutes, play nine holes and go home,” Hovland implemented new routines and strived to practice with a purpose. He also placed a premium on fitness and nutrition – admitting that ‘fad diets’ might not be the best strategy for him.

“I spent a lot of time on YouTube (during the hiatus), just learning about stuff,” Hovland said. “I was into some fad diets, just weird stuff, just trying out to see how my body would feel. Figured out that’s not it. Going through more conventional nutrition, figuring out what I need to eat. Eating more protein, a little less fat, very basic stuff. A little more frequent meals instead of eating just two times a day.

“In Puerto Rico, I was doing intermittent fasting, and a couple of tee times, it was like 1:00 and I hadn’t eaten the whole day. My early tee times, I teed off at 7:00 and finished after 12:00 and didn’t have anything to eat before that. I don’t think that was the way to go for me.”

Since that breakthrough Puerto Rico Open title, Hovland believes his game has rounded out further as well. He has gained speed off the tee – “practicing swinging hard, dedicating 20 minutes to just hitting it as hard as I can.” He has improved his short game, now utilizing a 10-finger grip for chip shots within 30 or 40 yards. The AimPoint putting method, he said, has improved his ability to identify the correct line on the green.

Two years ago, Hovland made his TOUR debut at the Mayakoba Golf Classic. He was an Oklahoma State junior, competing on a sponsor’s invite. He missed the cut by a stroke.

Last year, he again missed the cut by one.

“He just does nothing wrong,” said Eckroat of Hovland’s game. “The golf ball just stays in front of him. He never hits it off-line, never makes big mistakes. He never compounds one mistake on top of another. It’s simple golf, and he does everything pretty well.”