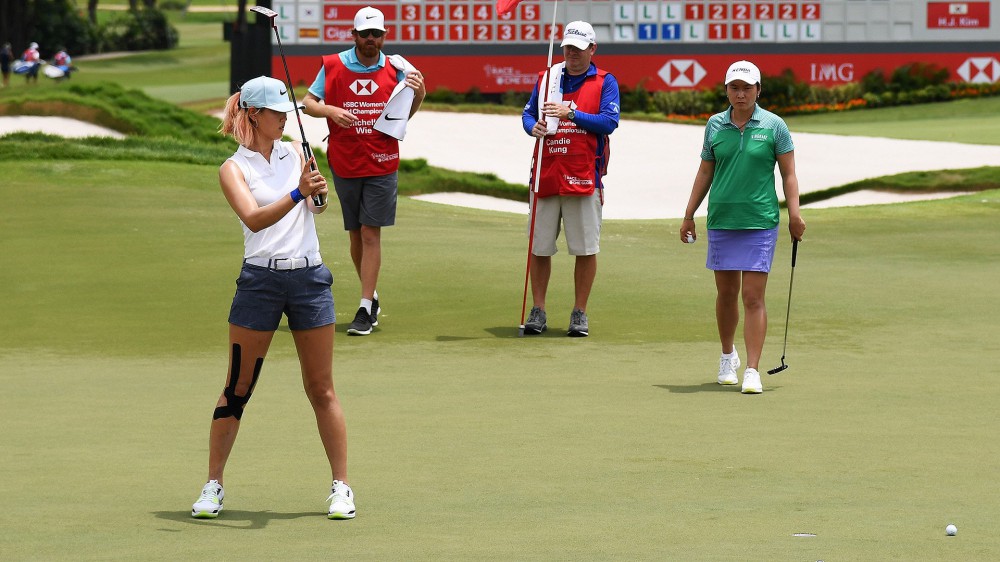 From afar, Michelle Wie looks as if she is being held together by kinesiology tape.

She opened the HSBC Women’s World Championship Thursday with a considerable amount of tape supporting her joints. She had tape on her right knee and both wrists. She had collagen injections in both wrists in the offseason to deal with arthritic pain.

“It’s fine,” Wie said. “It’s been a little struggle, trying to work through that, but it looks a lot worse than it is.”

Wie’s game looked more than fine. She did her best impression of Seve Ballesteros getting into early contention at the HSBC Women’s World Championship.

“I made a lot of birdies from the trees today,” Wie said. “That was interesting.”

Wie found her way out of the trees and on to the leaderboard, posting a 5-under-par 67 at Sentosa Golf Club’s Tanjong Course in Singapore. She is tied for second, two shots behind Jennifer Song.

Wie, 28, is seeking her fifth LPGA title, her first since winning the U.S. Women’s Open in the summer of 2014.

“Feel like I placed myself in a good position today, so hopefully, the next three days [I’ll] make my birdies,” Wie said.

Wie continues to show promise with her rejuvenated putting stroke. She got her putting on track last year with an unusual rotation of three different grips. She used both a conventional grip and left-hand low grip on Thursday in Singapore, with her index fingers down the shaft in both grips. She entered the week leading the LPGA in putting average this season, but she was kicking herself for a pair of three-putts on the speedy greens on the Tanjong course, including one at the last hole.

Wie opened this year with a pair of 11th-place finishes, one in the season-opening Pure Silk Bahamas Classic and again last week at the Honda LPGA Thailand. She is looking to build on the momentum she regained last year. While she didn’t win in 2017, she got herself in regular contention, logging six finishes of fourth place or better the first half of the year, before a neck spasm and an emergency appendectomy derailed her late in the summer.

“Every day I go out there, just definitely more confident,” she said.