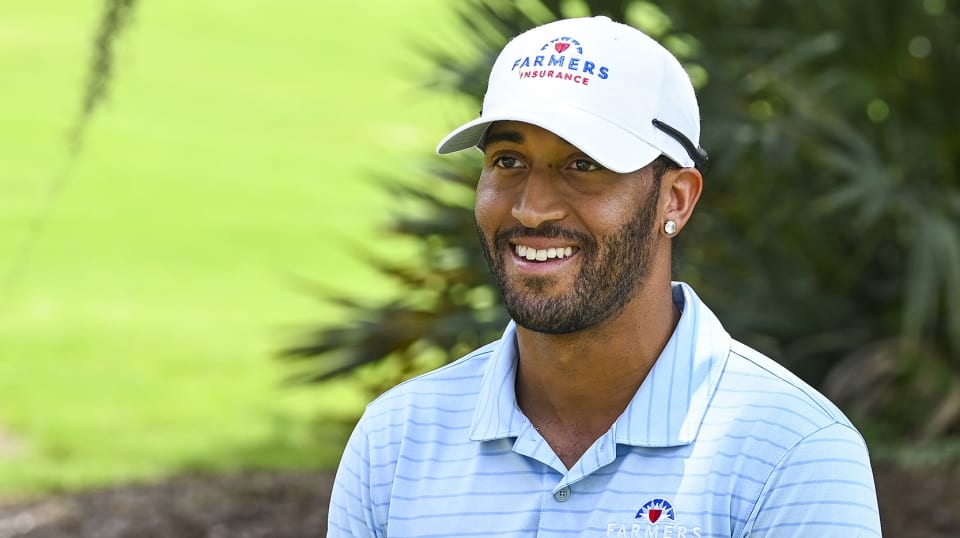 A little over a week ago, WiIlie Mack III managed to squeeze in 27 holes of practice at iconic Riviera Country Club. Turns out, comedian Adam Sandler just happened to be playing in the group behind him that Sunday, too.

“He wasn’t doing any Happy Gilmores,” Mack recalls with a chuckle. “But it was fun to meet him.”

It will be all business this week, though, when Mack returns to the historic club which has counted among its members old-school Hollywood movie stars like Spencer Tracy and Katherine Hepburn to Sandler and many other current celebrities like Mark Wahlberg and Larry David and Carson Daly.

He’s playing in the Genesis Invitational after receiving the Charlie Sifford Exemption given to a deserving minority golfer as chosen by the Tiger Woods Foundation. It will be Mack’s second career start on the PGA TOUR — and second in four weeks.

Yes, life is moving fast for the unassuming 32-year-old these days. But make no mistake – this is the byproduct of years of hard work for Mack who once slept in his Ford Mustang in hotel parking lots while playing the mini-tours in Florida and pursuing his pro dream.

Mack and his father, a mental health counselor with the state of Michigan, actually started playing golf because of Woods, who is on the mend from a fifth microdiscectomy and won’t be able to compete in the tournament he has hosted since 2016. Woods will be onsite, however.

“I just remember watching on TV and he was just different than everybody else,” Mack says. “I just kind of like gravitated to watching him.”

To earn the Sifford exemption, well, that was almost beyond belief.

“I thanked them probably more than most times for a lifetime,” Mack recalls. “But I was just excited and kind of got off the phone and called my dad and he started crying.

Mack says he was probably 6 years old when the two first went to the golf course. He reports that he was “horrible” at first but treasured the “good bonding time” with his dad. They’d watch TV and try to imitate what the pros did when they teed it up on courses like Pierce Park and Swartz Creek in their hometown of Flint, Michigan.

“We kind of just kept with it,” Mack says. “And by the third year I got a lot better. I think after that it kind of just stuck with me, and I fell in love with the game.”

By the time Mack was 12, he started taking lessons from Jack Seltzer, a member of the Michigan Golf Hall of Fame. There was a golf dome about 20 minutes from Mack’s house so he could practice during the cold, snowy winter months.

Although Mack played football, basketball and baseball, too, he knew his 5-foot-7 frame wasn’t exactly built for long-term success in those sports. Golf was different, though, and Mack had several scholarship offers, eventually deciding to play at Bethune-Cookman in Daytona Beach, Florida.

“I wanted to get out of Michigan, for sure,” Mack says, weighing sunshine versus snow. “I didn’t even go to any of the other schools. I just went there and fell in love with it.”

While at Bethune-Cookman, Mack won 11 tournaments and his career goals came into sharper focus.

“I always dreamed to be on the PGA TOUR when I started golf,” Mack says. “But probably when I was in college and I won my ninth tournament, I kind of was talking to my parents and I was telling them I wanted to try and maybe make a career out of it.

“It might not have worked out, but I wanted to at least give it a shot. And then here we are today.”