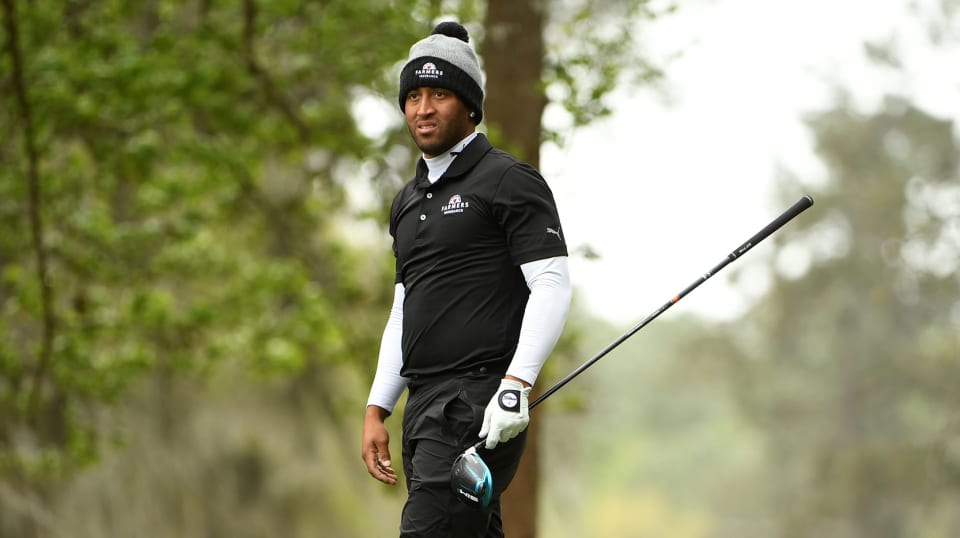 ST. AUGUSTINE, Fla. – Willie Mack, fresh off of two starts on the PGA TOUR, and ranked collegiate golfer Mahindra Lutchman from Florida A&M University, shot 4 under-par 68s to take a share of the first round lead in the APGA Tour at World Golf Village tournament Monday at the renowned King & Bear layout.

Mack is the Flint, Michigan, native who played in both the Farmers Insurance Open and The Genesis Invitational as a sponsor exemption in recent weeks after a decade as a top player on the APGA Tour and other pro golf series. Lutchman is a senior at Florida A&M in nearby Tallahassee who is the No. 3-ranked player in the APGA Collegiate Golf Ranking compiled by PGA TOUR University.

They are two shots clear of second place finisher Daniel Augustus of Bermuda, and three shots ahead of a group that includes Landon Lyons of Baton Rouge, Louisiana, a two-time winner on the APGA Tour this year. The field of 49 players is competing for $25,000 in prize money with the tournament final round tomorrow on the 7,279-yard, par 72 golf course designed by Jack Nicklaus and Arnold Palmer.

Mack, who sank a 30-foot putt for birdie on No. 12, was happy with the way he handled the blustery conditions. “When the wind is blowing, you need your short game and that was working for me today,” he said after carding five birdies but closing with bogey on the par-5 18th hole.  Did the PGA TOUR experience help me today? Definitely.” Mack was 1 under after 14 holes in the Farmers Insurance Open first round before eventually missing the cut there and at The Genesis Invitational.

Lutchman, who is joined in the field by teammate and APGA Collegiate Ranking No. 1 Mulbe Dillard, bogeyed the first hole but vaulted into contention with all pars and five birdies, including on 17 and 18. Dillard shot a three-over 75. If Lutchman and Dillard can retain their rankings through the spring college golf season, they will be provided with exemptions into the APGA Tour summer events along with expenses and entry into the Pre-Qualifying Stage of the Korn Ferry Tour Qualifying Tournament.

The APGA Tour at World Golf Village is the fourth tournament of the landmark 2021 season, featuring a record 13 events and $350,000 in prize money, almost double from the 2020 season for the tour, whose mission is to bring greater diversity to the sport of golf.

The tournament is being conducted under social-distancing and health/safety guidelines in conjunction with regional authorities.