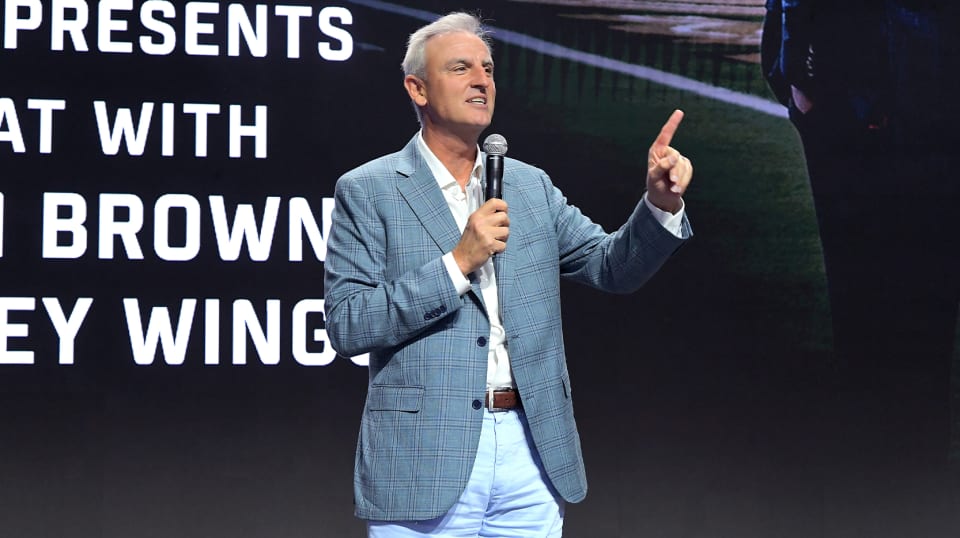 Trey Wingo, a 23-year veteran of ESPN whose contract ended in November, will make his PGA TOUR LIVE debut as he calls the Farmers Insurance Open at San Diego.

While he is more closely linked to the NFL, Wingo is no stranger to golf, having covered the U.S. Open and The Open Championship for ESPN. We caught up to him to talk about the game, the TOUR, pop culture, and Tiger’s most overlooked accomplishment.

PGATOUR.COM: You’re known as a football guy, having covered the NFL. Where does golf rank on your list?

WINGO: I love the game; I always say I’m not sure the game loves me back. That’s kind of what I love about it because the ball only goes where you send it. I think, to me, it’s the second hardest thing to do in sports, behind only hitting Major League pitching. You see the No. 1, No. 2 players in the world miss four or five cuts in a row, and if they can suddenly have a problem playing the game, you have to understand you’re definitely going to have a problem.

PGATOUR.COM: What exactly will you be doing for PGA TOUR LIVE?

WINGO: I’ll be hosting some of the featured groups on Thursday and Friday. I’ll work with Billy Kratzert, whom I’ve worked with for six or seven years on the U.S. Open and Open Championship, so I’m looking forward to that. Also, Craig Perks, the owner of the greatest 3-2-4 in the history of golf to win THE PLAYERS Championship. That was a couple years after “Be the Right Club Today” and Hal Sutton beating Tiger at THE PLAYERS, which was when Tiger was having problems with big, burly guys – Darren Clarke beat him at the WGC-Match Play in 2000.

PGATOUR.COM: What kind of scores do you shoot, and does the game suffer a bit in a Connecticut winter?

WINGO: I’m about a 9. My index at my club is a 7.6. I was on a heater toward the end of the year, but the clubs have been in storage for a while. Every year about this time I’m reminded that I have to play to be able to repeat anything and have success.

PGATOUR.COM: What about a simulator?

WINGO: We thought about putting one in the basement, but the ceiling was six inches too low.

PGATOUR.COM: You’d have got get on your knees like Dorf on Golf.

WINGO: Shout out to Tim Conway, rest in peace.

WINGO: I shot 73 at the Bay Course at Kapalua. It’s a shorter course; it’s not the Plantation. I made the turn at level, and birdied the 10th hole, a par-5 before they rerouted the course, and birdied 11. I texted my wife, “I’m 1 under through 11,” and she said, “What are you doing? Don’t tell me that, just play!” And I bogeyed the next three holes.

PGATOUR.COM: Dad would love a shutout.

WINGO: “The Greatest Game Ever Played” and “The Match,” both by the same author, Mark Frost. “The Greatest Game Ever Played” was the Francis Ouimet story, and “The Match” was Ken Venturi and Harvie Ward versus Hogan and Nelson, who ended up winning 1 up. An incredible story. The guy who set up the match, a successful car dealer in California, was Eddie Lowery, Ouimet’s caddie at the U.S. Open at Brookline.

PGATOUR.COM: You started a podcast, Trey Wingo Presents: Half-Forgotten History. What’s that about?

WINGO: It’s about Super Bowl championships, how the winners got there, what people don’t know about the journey. Season one has Archie and Eli Manning together. It’s off to a great start, we’ve sold three seasons. Season two is in the can. Season three will be a lot about golf, by the way.

PGATOUR.COM: Speaking of half-forgotten history, what have we overlooked about Tiger Woods?

WINGO: His 142 straight made cuts is the greatest record no one talks about. These guys today, with all due respect, don’t know how good he was in his prime. He would get out there on a day when he didn’t have it and still find a way to shoot 68.

PGATOUR.COM: Will working for PGA TOUR LIVE make you a better golfer?

WINGO: Let me put it this way: If osmosis is a thing, then absolutely. I’ve yet to see any evidence that that helps, but I’m always optimistic.