On a loaded leaderboard at the 83rd Masters, one name stands out in the star-studded crowd. Tiger Woods will enter the weekend just one off the lead at the year’s first major. Here’s where things stand through 36 holes at Augusta National.

What it means: Of the top nine names on the leaderboard, seven are previous major champions. They’ve combined for 22 titles. Woods owns 14 of them. The four-time Masters winner last slipped on a green jacket in 2005 and hasn’t won a major of any kind in 11 years, since the 2008 U.S. Open at Torrey Pines. As for his competition, Molinari broke through last year at The Open, went 5-0 at the Ryder Cup and most recently took the Arnold Palmer. Day, the 2015 PGA champ battling a balky back, has two previous top-3 finishes at the Masters. Koepka has won three of the last six major championships and would pick up the third leg of the career slam with a win Sunday. Scott is the 2013 Masters champion who re-emerged as a major factor last August at Bellerive. Oosthuizen, the runaway winner at St. Andrews in 2010, very nearly took this event back in 2012, losing to Bubba Watson in a playoff. Johnson is the 20-time PGA Tour winner still searching for a major follow-up to his 2016 U.S. Open triumph. Schauffele in his brief major career has racked up three top-6 finishes, including a runner-up last year at Carnoustie. And then, there’s Harding, the comparative unknown on the leaderboard who is a 10-time winner across the Sunshine and Asian Tours.

Round of the day: Schauffele opened with a bogey Friday and played the rest of the golf course 8 under par to post 7-under 65, the low round of the week.

Best of the rest: Oosthuizen opened with a birdie and played his first seven holes in 4 under before carding his lone bogey at the par-5 eighth. He circled three more on the back nine – Nos. 12, 13 and 15 – on his way to a tie for the lead.

Biggest disappointments: The top 50 and ties and anyone within 10 shots of the lead make the cut at Augusta National. Sixty-five players will stay to play the weekend. Notables to miss the 4-over number include Justin Rose (+4), Danny Willett (+4), Sergio Garcia (+4), Brandt Snedeker (+5), Charl Schwartzel (+5) and Paul Casey (+10).

Amateurs in the field: Four of the six will compete for low honors. Victor Hovland (-1), Alvaro Ortiz (E), Devon Bling (+3) and Takumi Kanaya (+3) will play two more rounds. Kevin O’Connell (+4) and Jovan Rebula (+8) are headed home. Ortiz is the first LAAC winner in that event’s five-year history to make the weekend at Augusta.

Slip of the day: For the second day in a row, Woods made birdie from the trees left of the 14th fairway. But on Friday, he upped the level of difficulty, adding a falling security guard to the mix:

After steadying himself, he rolled in a 28-footer to push to 5 under par, then just two off the pace.

Quote of the day: “It sounds like you’ve let one go, right? Every 30 seconds, I would be letting the balloons out, and these guys are looking at me very strange. But they understood what’s going on.” – Day, explaining his morning routine of blowing into a balloon to set his ribcage back in place Jason Day blows up balloons to get his ribcage into position. It’s one of the many things he does to get into playing shape. And he’s tied for the 36-hole lead at the Masters. 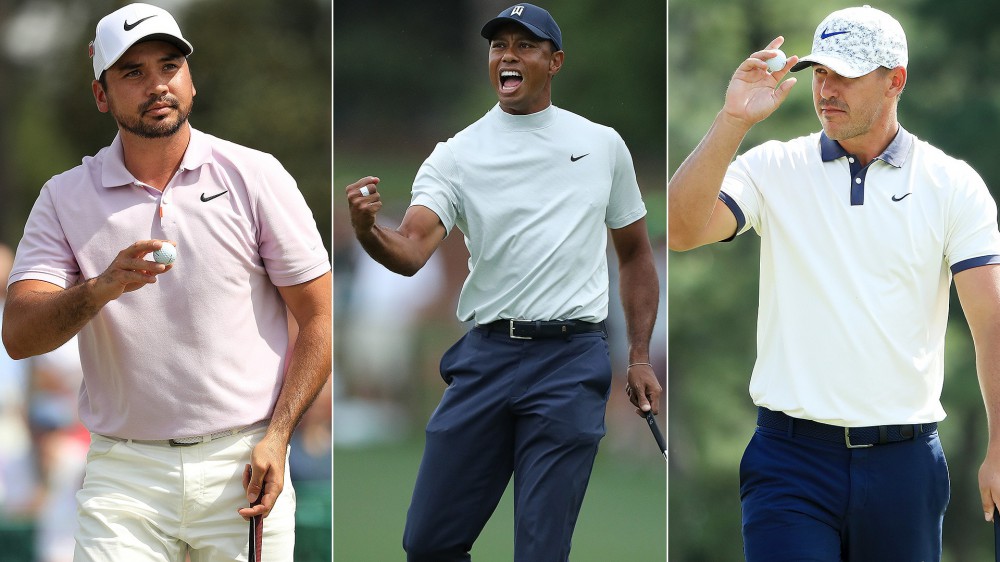 McCarthy: ‘Pretty odd today going out as a onesome’