Nobody was more motivated to make it through U.S. Women’s Open sectional qualifying this week than Karine Icher.

She took all the frustration she is feeling as a working mom and turned it into fuel.

Icher blazed her way through the qualifier at Rush Creek in Maple Grove, Minn. She routed the field, taking the lone spot available among the 35 entrants. The five-time LET winner and four-time Solheim Cup veteran from France won medalist honors by five shots.

Icher, 40, did this while still freshly smarting from the rejection she felt after the USGA turned down her request for a special maternity exemption, something like the ones Stacy Lewis and Brittany Lincicome were offered this year. Lewis accepted, Lincicome declined and Icher fumed over why an exception couldn’t be made for her, too.

So Icher flew to Maple Grove on a mission.

“It was the best answer I could give … by [being] deserving [of] my spot and not stealing it,” Icher said of winning medalist honors.

Icher believes she was deserving of the same consideration Lewis and Lincicome received, even though they ranked considerably higher on the new interim maternity standard the USGA created this year to allow the organization more time to fully formulate a new maternity policy.

“The USGA is changing their rules for next year, but they’re already applying them to this year, after the deadline for entering the U.S. Women’s Open has passed,” Icher said. “I don’t understand how that’s fair to do, after entries were closed.

“Stacy and I had our babies a week apart. If they’re going to do this, why didn’t they do it for all the players who had babies?”

Originally, Lewis applied for a special exemption to this year’s U.S. Women’s Open, but it was denied. She appealed to the USGA, asking officials to review their maternity policy, which wasn’t nearly as flexible to a working mom’s needs as is the revamped new policy adopted by the LPGA earlier this year.

To the USGA’s credit, the organization listened to Lewis and acted quickly, announcing the new temporary maternity provision two weeks ago. It was designed to accommodate this year’s playing moms while giving the organization time to comprehensively update its policy.

“Similar to our own maternity policies for staff members at the USGA, we believe that a player should come back from maternity leave with the same status they went out with,” said Craig Annis, the USGA’s managing director for marketing and communications.

When Lewis left the tour to prepare for the birth of her daughter last year, she was No. 33 in the Rolex Women’s World Rankings. The top 50 are exempt to this year’s U.S. Women’s Open. She was granted a special maternity exemption based on that. Lincicome also received the offer based on her ranking inside the top 50.

Icher, however, was No. 95 in the world rankings when she left the tour last year to prepare to give birth. She also was outside the top-75 LPGA money list standard for the U.S. Women’s Open. She was denied the special maternity exemption based on that.

The USGA seemed to draw a reasonable performance line, but it still frustrated Icher.

In 2011, Icher said she was qualified for the U.S. Women’s Open but did not play because she was about to give birth to her first child, Lola.

“I didn’t get my spot back the next year,” Icher said.

To fully understand Icher’s frustration, you have to understand what a driving force she was in the LPGA’s overhaul of its maternity policy this year. Icher pushed for many of the changes that today’s and tomorrow’s LPGA mothers will enjoy, while Icher hasn’t received those same benefits. She wasn’t eligible for the new provisions she was so instrumental in creating.

Also, under the new policy, a player can preserve the LPGA status she took into her maternity year for up to two years after the birth of her child, instead of that single year. This allows a player the flexibility to spend more time at home with her baby before choosing to return. Also, in yet another change, a returning mother has more than a calendar year to retain her status. She can choose to return at any time during a year and have a designated number of starts – spilling over into the following year – to retain her status.

Icher helped make all of that possible, but she played under the old policy while giving birth last year. She played 16 events in 2018 – six more than the former maternity leave allowed – and struggled once she got deeper into her pregnancy. She ended up finishing 110th on the money list, outside the top 80 and top 100 priority categories.

“My biggest mistake was trying to play as much as I did last year,” Icher said. “But how can you blame a player for that?”

If the new policy Icher helped create was in effect last year, Icher could have taken maternity leave in 2018, still played those 16 events last year, but, importantly, she would have retained her 2017 status as a top-40 money winner through last year and also through this year.

Icher did get a medical extension for leaving the tour to give birth last year. She was given seven starts this year to improve her 2018 status. In four starts so far this season, she has made one cut and $4,147.

“With this baby boom, a lot of players are learning how hard it is to come back after having a baby,” Icher said. “I asked if the LPGA board could grandfather me into the new policy, but I never heard anything back.”

LPGA tour operations officer Heather Daly-Donofrio said Icher’s situation is difficult, but it wasn’t something the board could act upon.

“It’s not a board issue,” Daly-Donofrio said. “It’s a regulation issue, so it falls under the purview of the management team to interpret the regulation. We looked at it, but as a matter of course, we don’t retroactively apply changes to our regulations that effect playing status.”

Daly-Donofrio said portions of the new maternity policy made sense to apply to moms who gave birth last year, but “to change playing status after the fact, to retroactively apply the maternity policy that way, could impact other members negatively. We don’t go back as a matter of course.”

Daly-Donofrio said she empathizes with Icher.

“I feel for her,” Daly-Donofrio said. “She was helpful through the whole process of making maternity leave changes. She was an agent of change. I can see how that frustrates her, where you’re an agent of change but you aren’t reaping the full benefits of the change. It’s very emotional and personal, and I understand that.”

A frustration for Icher is that she feels like there’s a “retroactive” change being made by the USGA this year, in creating new maternity exemptions after U.S. Women’s Open entries closed, and yet the LPGA won’t make “retroactive” changes that would help her benefit from changes she helped create. 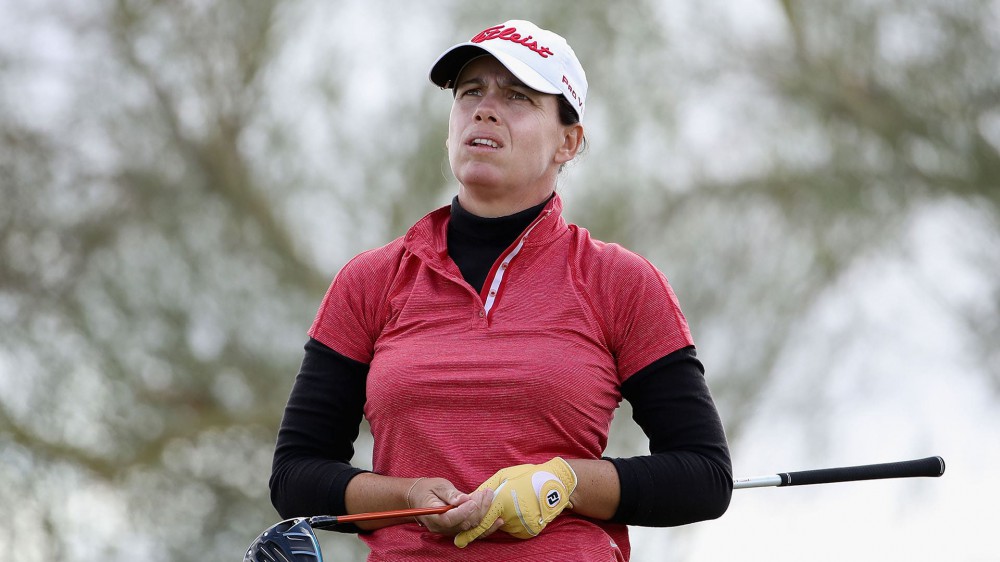