When Justin Thomas hits a golf ball, the first thing your eyes move to is the launching effect of his feet. After all, this is a little dude hitting a ball an incredibly long way. Thomas was true to form at the Honda, averaging 320 yards off the tee on his way to beating Luke List in a playoff.

But pure clubhead speed isn't the only reason the 5-foot-8 Thomas has been one of the hottest golfers on the planet over the last 18 months.

"A lot of players can swing fast," says top Alabama teacher Tony Ruggiero, who works with Lucas Glover and Tom Lovelady, among other tour players. "Justin is able to control the ball in the wind and through difficult course conditions because he has control of the clubface."

Want more tips on how to get better? Try our video lesson series that will teach you how to practice: Range Plans.

The secret to that control? A good pivot, says Ruggiero.

"Justin's body unwinds from the ground up, and the rotation of his body delivers the club–where most amateurs are delivering it with their hands and arms. The way Justin does it, you don't see the clubface flipping or rotating much. That's why he hits it so solid, and has such good control."

To get some of that in your game, use your pitching wedge to hit some pitch shots with a tee poking out of the flap in your glove. "Work on turning the back of your glove so that the tee is pointing at the target at impact," says Ruggiero, who is based at the Country Club of Mobile and the Bay Point Resort in Panama City Beach, Fla. "Hit those shots focusing on going through the ball in the right order–hips, chest, grip and then clubhead. When you have the right hand action combined with a good pivot, you'll have so much more control over contact and direction." 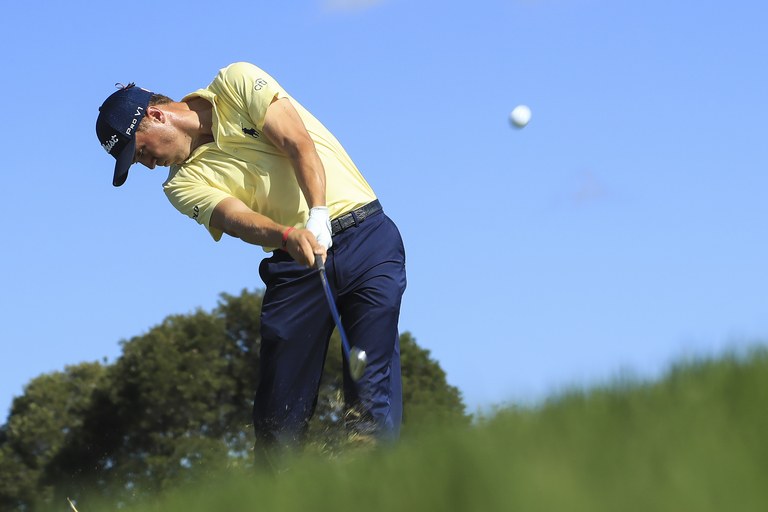 Sam GreenwoodPALM BEACH GARDENS, FL – FEBRUARY 25: Justin Thomas plays his shot on the fourth hole during the final round of the Honda Classic at PGA National Resort and Spa on February 25, 2018 in Palm Beach Gardens, Florida. (Photo by Sam Greenwood/Getty Images)

What To Do On The Green

Graham offers details on Trump's round of 73