TaylorMade FlexTech Stand Bag – TaylorMade has always made great looking golf bags. The FlexTech Range for 2019 is no different in the aesthetics department. Out of the five models in the carry bag range, I managed to get my hands on the headline model – the FlexTech stand bag. 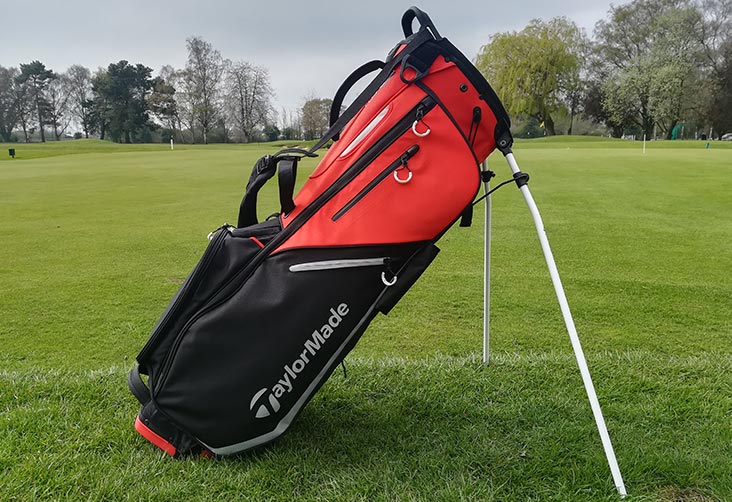 Let’s not beat around the bush here, this is a golf stand bag from one of the leading equipment manufacturers in golf, so what can really be that different? Don’t forget this is TaylorMade we’re talking about here. The masters of finding new technologies and ideas to improve our enjoyment of the game (whether you believe them or not). The FlexTech bag therefore features two new standout ‘ideas’.

Firstly, a unique construction where each main side pocket is built into the middle of the golf bag which is said to allow for more storage without any added weight. Secondly, following extensive market research from TaylorMade, the design also contains a cart strap passthrough which is said to make it easier to access different pockets even when the bag is on the back of a buggy or on a trolley.

TaylorMade FlexTech bags feature a patented smooth release system and collapsible base system to improve ease of use and prevent club crowding. The FlexTech Stand Bag also includes a new self-adjusting strap, allowing for a stable and comfortable carry.

I tested this bag over 36 holes of golf. The first test took place at Fulford Golf Club in dry spring conditions as I tested the bag’s functionality, weight, storage and comfort. The second 18 holes however was a much different affair – putting the FlexTech bag through it’s paces in four and half hours’ worth of driving wind and rain at Gullane Golf Club, Course No.1.

In true Golfalot style, I doubt this bag has been tested in such thorough circumstances.

As I mentioned previously, this is a great looking golf bag. The kind of bag that any club golfer would take pride in slamming down on the side of the 1st tee on a Saturday morning. It’s pretty rare that TaylorMade releases a bag that isn’t aesthetically pleasing to be honest. On this point alone, I don’t think it will have any problems flying off the shelves.

Taking the bag out of its box I was surprised at how light it was. The materials felt premium and the build-quality looked of the highest order.

I liked the simple, no-nonsense design. At first glance, it was clear to see that TaylorMade hasn’t really done much at all with this bag apart from focus on getting the basics right, which in case I’m not mistaken, are the following: looks, durability, weight, comfort, storage and stability in the wind.

So, did they get the basics right? Let’s find out…

Let’s rewind slightly… Before getting the course, the first big test for a stand bag comes in the locker room: could I fit all 14 of my golf clubs in with ease? This might seem like a given for a golf bag, but we’ve all been there when you reach to pull a 5-iron out and end up with a 6-iron, 7-iron and putter coming out with it… Thankfully, the FlexTech passed the test with flying colours.

Considering I have two extra wraps of tape around my irons and a thick grip on my putter, if there’s any set of golf clubs that are prone to getting stuck – it’s mine. Like most stand bags these days, the FlexTech features full-length dividers to eliminate this very problem – which they did.

The second test with a stand bag comes in the storage department. Can I fit everything I need for 18 holes of golf into the bag and it still not weigh a ton? Yes is the short answer here.

The FlexTech has an impressive 11 pockets and weighs an impressive 4.5lbs. I carried the following during the test: a waterproof jacket, woolly hat, spare glove, 9 scabby golf balls, a dozen pack of ProV1s, bottle of water, tee bag, rangefinder, rain cover and a brown banana. I had plenty of space to do so and could have squeezed a whole lot more in if I wanted.

This will give the golfers looking to use this bag on a trolley piece of mind too, as generally they will cram as much in as possible as carrying weight is not an issue. The FlexTech bag finds a really good middle ground here ticking both boxes.

As well as the main storage pockets on the bag, it also features a handy seam-sealed valuables pocket with micro-suede lining. In the driving rain at Gullane, this pocket in particular played a huge role in keeping my valuables (phone, wallet, keys, rings) all dry and safe in one place.

Even the zips on the pockets themselves impressed me. They weren’t just the traditional metal zip that you would expect on a golf bag. Instead they featured a loop for easier usage. Not that this is something that should make or break your decision to purchase this bag, it was just a well-received perk and looked good too.

The feature that impressed me most about this bag was the straps. Following suit with the rest of the bag, they were simple and effective but most of all, comfortable. The straps themselves featured a huge amount of cushioning which made the bag a joy to carry. I would even go as far as to say that because the straps were so comfy, they made the bag feel lighter overall.

They were also part of a new self-adjusting strap system, meaning that adjusting the straps could be done with ease. When carrying the bag from shot to shot, it felt well-balanced and sturdy on my shoulders. The straps were also positioned in a way that meant they didn’t get in the way when I was getting things out of the pockets (mainly provisional balls). A big tick for any carry bag.

I think it would be wrong to call it technology but this bag also features an anti-split stand system. This again, worked well and ensured that on a variety of surfaces – fairway, rough, cart path, train station platform – the legs would not split.

In the howling Scottish winds at Gullane, the legs combined with the wide and sturdy base to see the bag hold its own and keep it from blowing over – we’ve all been there, and it’s a nightmare.

The final edition to the FlexTech bag, which is standard for carry bags of this nature – the detachable raincover. The raincover was nothing to shout home about if I’m honest but I suppose it does a job of just offering that extra protection to your club heads. Attaching the cover to the bag came with ease and worked well.

Finally, my second test highlighted how unbelievably waterproof this bag was considering it’s not actually regarded as a waterproof bag. In some of the worst rain I have ever played in (tip the water out of your shoes when you’ve finished, sack off even wet weather gloves, and just cling on for dear life kind of bad), 99% of my belongings were still dry after 18 holes. Ok, my clubs were soaked but that was down to a problem with most golf bags – they have a huge hole in the top of them.

As far as the storage compartments are concerned – the high quality materials, attention to detail and sturdy build quality mean that this bag will see you right in all most every condition you’re likely to encounter on a golf course.

Yes, and I do. The TaylorMade FlexTech bag is my chosen golf bag for the 2019 season. I will use it for 90% of rounds of golf and enjoy using it every time.

The only time I won’t bother is when I don’t need the storage and am just taking out half a set and will switch back to my trusty Sun Mountain H2NO Sunday Bag.

Contradictory to TaylorMade’s approach to manufacturing golf equipment in recent years, it has kept the category-inventing boffins (cough marketing team cough) out of it and taken things back to basics here with the FlexTech bag and that is why I like it so much.

The straps are comfy to wear, the storage was endless, it performed well in tough conditions, works well on and off a trolley and looked great doing so.