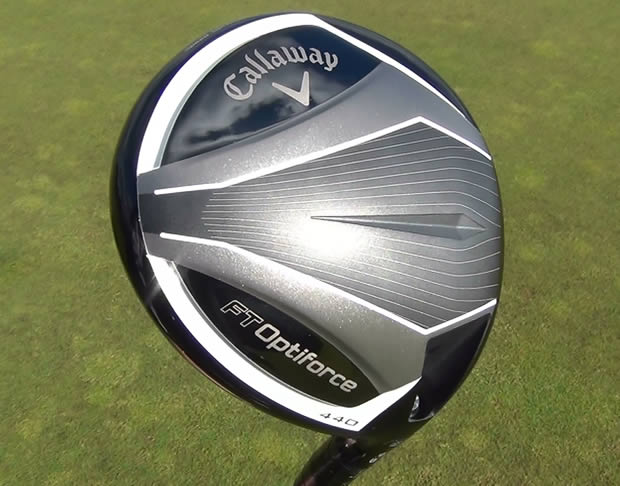 Callaway FT Optiforce Driver Review – The Callaway FT Optiforce driver is designed for speed and follows the fairly simple tenet that if you make a clubhead lighter, more aerodynamic and add a longer shaft to it you will increase the clubhead speed to give greater ball speed at impact resulting in more distance. 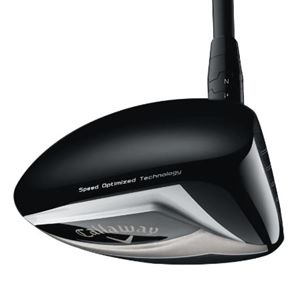 The head features the now familiar VFT Hyperbolic Face to create a larger sweet spot. The Fusion Technology (FT) combines a Forged Compostie head with a titanium face that feels very good and provides a nice crisp impact sound at impact. The forgiveness is also very good, particularly as the Optiforce seems to have a relatively compact face for the head size.

There are two models with a red-detailed 460cc version that has a standard 10.5 degree loft and a slightly higher draw bias trajectory than the smaller, white-detailed 440cc 9.5 degree version below.

Both heads feature a contoured sole that is there to channel the air around the club as it moves through the air. There are small aerodynamic ‘slots’ in white down each side of what is otherwise a very sleek and smooth looking head with a classy, no-nonsense design. On the 460cc head the white line around the back of the sole is red, but it is the same feature.

Callaway claim the 440cc version has 23% less drag than the X Hot Pro driver, which has a similar size head and when we put this to the test we would have to agree that it is quicker through the air.

Compared to a variety of other current drivers the Optiforce clubhead speed was around 2 mph faster, which according to the FlightScope Data from our friends at Leading Edge, resulted in an extra 4 mph ball speed and an extra 10 yards carry.

Now we have to qualify this and say that this was for my swing and that the Optiforce Project X shaft was an inch longer than the others too, but taking it as a package then I am comfortable with the speed claims Callaway are making.

At address the 440cc version sits very well behind the ball and has a clean head, whereas the 460cc version has a small alignment aid and some crown graphics. The 460cc version can also be distinguished by the red graphic around the back of the sole.

The smaller head of the 440cc Optiforce does look more compact than most other drivers, which could be due to the tall face and crown or the fact the longer shaft makes it seem a little further away. Either way it takes a little getting used to, but persevere as the smaller head is more forgiving than it looks.

At 290 grams it is a well balanced, light club to swing and the overall feel of the Optiforce driver is closer to the RAZR Fit Xtreme driver than the X Hot driver. For the first time Callaway have used a light 43 gram Project X shaft as a stock option that performed very well and was light, stable and provided a good level of feel.

The shaft is an inch longer than usual at 45 inches, but did not feel that way at address or when swinging. However as you would expect, the shot dispersion was fractionally wider in our tests as longer shafts can be harder to control, even though the Project X is better than most other longer shafts I have tried.

At impact the Optiforce delivered a lovely crisp, solid sound and the feel was excellent too. The trajectory of the 440cc version was a little lower and more penetrating than the 460cc in standard setting but both models feature an adjustable hosel for you to fine tune this to suit your swing.

The OptiFit adjustable hosel is only the second version we have seen that uses two adjustable rings to change lie and loft. The other is the Titleist 913D, which has one ringfor loft and one for lie. The Optiforce uses both rings to combine to give a neutral or draw setting that can be adjusted done one degree or up one or two degrees.

Unlike the Titleist driver, both rings rotate on the shaft instead of just one so those of you who like the shaft logo in a certain place or to align the shaft for technical reasons can do so. Having checked with Callaway designer Alan Hocknell that this is OK, we think this is a big benefit.

All adjustable drivers come with a round grip so you can rotate the shaft and it feels ok, but the fact you can rotate both rings on the Optiforce means you can fit a more traditional grip on the club and ensure that it feels the same and the grip lines are in the right place however you adjust it.

The adjustments may not be as comprehensive as some models, but they cover most bases. Even though there is no fade setting, reducing the loft by a degree with also open the face slightly. Getting professionally fitted before buying is therefore a must to get the best set up for your swing.

Overall I would have to say that the Callaway Optiforce delivers in all areas and lives up to its claims. The head is faster through the air and the feel, sound and forgiveness are out of the top drawer.

The more sophisticated Optifit hosel is better than previous Callaway adjustable hosels and using this, most golfers will be able to find a head size and set up that should give them more distance.

I would like to give the Optiforce driver full marks as I do like playing with it, but a couple of things hold me back. The 440cc head is the faster through the air as it is smaller but it would be nice to have 440cc performance in a slightly larger head. It is quite pricey and whilst the adjustable hosel options are better than most in the market, it still does not enable changing loft withouth changing lie.

Despite all this I am still happy to recommend Callaway FT Optiforce driver for the looks, performance and feel because for a composite driver it is one of the best in the market.